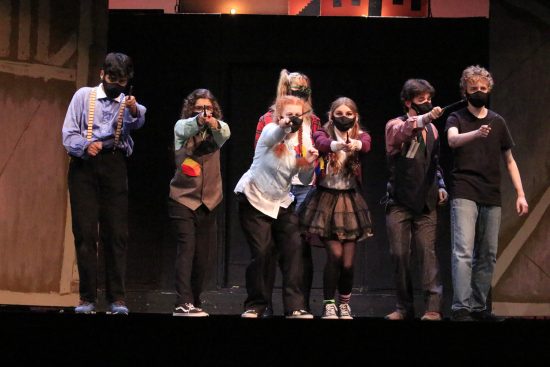 Everyone knows the famous fantasy series about a certain boy wizard – he grows up with some terrible relatives, goes to a magic school, saves the world a few times, blah, blah, blah…we’ve all heard it a million times. Everyone knows about his school, too. Divided into four groups, the stories about this boy wizard tell the tales of four kinds of people: brave people, smart people, evil people, and… what did the fourth group of people do? “Puffs,” a play written by Matt Cox and originally produced off-Broadway, sets out to answer this very question. Now, it is one of the most produced plays in high schools across the country, with the newest addition currently playing at Albert Einstein High School.

This being the first live production for the school after the Covid-19 lockdown, it was to be expected that this production would be the product of a group of students struggling to go back to the way things were. However, the play instead showcased the brilliant comeback of high school theatre. This almost-entirely student-produced production proved to the world that teens are capable of coming out of this pandemic, not kicking and screaming, but working hard and ready to go.

This show was perhaps the best way to start the season. The script was incredibly fun and humorous, and it allowed the cast and the audience to get together on an inside joke for a couple of hours. The cast of the Einstein production clearly had a lot of fun producing this show, both in rehearsals and onstage. Everyone seemed to let loose and have fun with each other, resulting in a cast that realistically portrayed a captivating group of friends struggling through their seven years at magic school.

The cast of this production was simply incredible. Led by a trio of young wizards (Carl Parkin as Wayne Hopkins, India Eddy as Megan Jones, and Antonio Rivera as Oliver Rivers), the cast showcased their brilliant ensemble skills and their abilities to work as a team to tell a compelling story. Parkin, Eddy, and Rivera carried the show throughout, providing detailed characters and expertly developing them as the play progressed. Eddy was especially impressive as her goth character, showing off her ability to evolve a character throughout the performance. Other standouts of the cast included Langston Muller as the Male Teachers, displaying excellent comedic timing through difficult costume and character changes, and Kendall Cox as Leanne/Ginny, whose adorable portrayal of both characters allowed her to thoroughly steal every scene she was in.

No show is complete without a talented crew to make it look and sound amazing. Einstein’s student-led crew teams helped the actors create the magical world in which the play takes place. The set, built by the team led by Mia Anderson, perfectly captured the “certain school of magic and magic,” and the props department, led by Hayley Brewer, Alex DelSole, and Anjali Shah, exhibited their craftsmanship skills when it came to the magical elements of the story. Ranging from magically appearing lists, glowing rocks with magic powers, and a fiery cup of some importance, these props immersed the audience in the world that the characters were in.

Altogether, this impressive high school production was a truly enjoyable way to spend an evening. Fans of a certain boy wizard and Mug-Borns alike can gather to learn more about the magical world that we all fell in love with. The play is chock full of references that even the most die-hard fans may not notice, while still being a captivating story for a casual viewer.