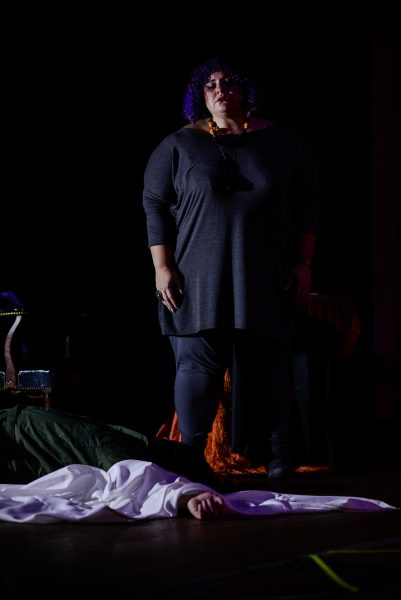 As far as I knew, noted composer Gian Carlo Menotti only wrote one short opera, namely “Amahl and the Night Visitor.” What a delightful surprise to find that I was, once again, mistaken. It turns out he was incredibly prolific, having written at least 27 operas. This past weekend, I had the distinct honor to hear the esteemed Baltimore Concert Opera company perform one of Mr. Menotti’s works, “The Medium.” What a beautiful sensory experience. But then, I have never been disappointed by this organization’s efforts, and this one was exceptional.

Menotti’s 1946, one-hour opera originally premiered in New York City before moving to Broadway in 1947. It gained a wider audience with a televised version in 1948, one of the earliest pieces of this genre to be broadcast over the television airwaves. It was even made into a film noir in 1951.

The story concerns one Madama Flora (Baba), a spiritual medium who can allegedly communicate with the dearly departed—in other words, a con woman. Or is she? Madama lives in Budapest with her daughter and partner-in-crime, Monica, and a orphaned, mute boy named Toby, during what appears to be the mid-last century, based on the costumes. The two young people are very close and Monica is very protective of her ‘brother,’ playing dress up and other games with him. She does her best to shield him (and herself) from the alcohol-fueled rages of Madama, who is never without her flask.

Seances are conducted in their living quarters, with the gullible Mr. and Mrs. Gobineau trying to contact their dead two-year old son, and an equally vulnerable widow named Mrs. Nolan who is trying to reach her 16-year old daughter. A shadow figure is shown in silhouette behind a screen, supposedly the Nolan girl manifesting from the netherworld (actually, it’s Monica.) The little boy can be heard giggling as well. Both are tricks being perpetrated by the trio of grifters. During one of the sessions, Madama swears that someone actually reached out and touched her, grabbing her throat. She screams and throws everyone out, drunkenly deciding that Toby must have engineered some kind of hoax, even though he was nowhere near her. In the second act, the naïve guests return, convinced that the spirits will be available again. Madama reveals that she is a fake, but they don’t want to believe her. She goes more than a little insane, blames Toby for all her problems, and throws him and the others out. But Toby sneaks back in, and when Madama Flora sees the shadowy figure behind the screen again, she shoots at it, killing Toby. The question remains of just who—or what—had a hand on the neck of Madama Flora?

It is an opera, so tragic endings are par for the course.

In the exceptionally capable hands of director Catrin Davies, the production moves along a well-paced clip, with the characters deftly defined and the minimal set and props adding just the right amount of artifice to suggest a well thought out mise en scène.

Conducter Joshua Hong does a fantastic job of keeping the performers on track with the incredibly complex piano score, played with gusto and amazing dexterity by Wei-Han Wu, one of the best pianists I have heard in some time.

In the supporting role of Mr. Gabineau, Travis Lucas sings the least of the ensemble (Toby notwithstanding), but infuses each line with the rich baritone of a truly accomplished artist.

Samantha Lax’s beautiful voice is a lovely accompaniment to Mr. Lucas’ and her portrayal of Mrs. Gabineau is as well-acted as it is sung. She brings a depth to the rather smallish role that makes every note an achievement.

Taylor Hillary Boykins sings the part of Mrs. Nolan with a heart-breaking intensity. Her pitch-perfect mezzo-soprano is so well-suited to the part that it could easily have been written specifically for her all those years ago. She is a truly gifted performer.

Peter Pattengill is in the unenviable position of playing a deaf mute in an opera. The irony is that he is such a good actor that he is able to convey every necessary emotion and reaction with facial expressions and body movements, showing fear, delight, despair, and resignation with equal aplomb.

Amanda Sherriff’s voice has a richness that grabs you by the ear from her first notes to her final scene. There is something haunting, almost unusual in its beauty. As Monica, she is playful and funny in her scenes with Toby. When she tries to be defiant, threatening to leave with Toby if Madama throws him out, she is totally believable. In her Black Swan aria, she was riveting. Menotti’s writing for this character suits Ms. Sherriff’s soprano to a “T” which stands for terrific.

Jenni Bank as Madama Flora is a force of nature. She is a vocal tsunami that washes over everything in her path with a power that is commanding. It is impossible to turn away or even blink for fear we might miss something—lush, full, rich, deep, surrounding, comforting, and terrifying, all at the same time. With eyes that reminded me of the vamps of the 1920s silent film stars like Theda Barra and Greta Garbo, she can do more with her wide-eyed, penetrating gaze than most others can with every trick in their arsenal. A true tour de force and an uber talent that I hope graces our city’s stages often.

Baltimore Concert Opera is often found flying under the radar of the general public, which is a shame. Whether or not you think you like opera, go see this company at any and every opportunity. We need to appreciate how lucky we are to have them here, growing more and more accomplished with every season. “The Medium” only ran for a short time, but it’s memory will stay with me forever.

“The Medium” by Gian Carlo Menotti and presented by the Baltimore Concert Opera, ran November 12 and November 14, 2021 at Grand Ballroom, The Engineers Club, 11 W. Mount Vernon Place, Baltimore, MD 21201. Check here for their safety guidelines. Information about the whole season can be found on their website.