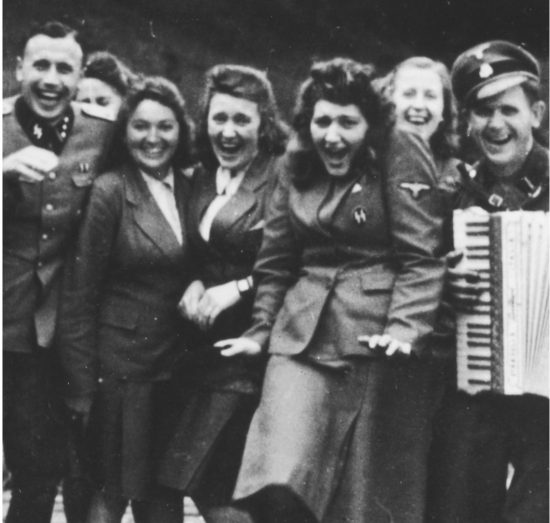 New York, NY and Washington, DC (November 3, 2021) – Tectonic Theater Project is the proud recipient of the Theater J Trish Vradenburg New Jewish Play Prize for their play Here There Are Blueberries by Moisés Kaufman and Amanda Gronich. This is the second year Theater J is awarding the prize, which recognizes a new play that celebrates, explores, and/or struggles with the complexities and nuances of the Jewish experience. Moisés Kaufman is the Artistic Director of Tectonic Theater Project in New York, and Amanda Gronich is a nationally recognized playwright and theater director.

The Theater J Trish Vradenburg New Jewish Play Prize awards $15,000 to an established playwright in honor of a new Jewish play, and is dedicated to the memory of philanthropist, playwright, and Alzheimer’s research advocate Trish Vradenburg, who served on Theater J’s Council for 13 years.

“When you set out to create a new play you rarely think about awards so early on, which is why we are especially humbled and grateful to receive this deeply meaningful recognition before our play has even been staged,” said Kaufman and Gronich in a joint statement. “Thank you to Theater J and to the Prize committee for choosing Here There Are Blueberries. We look forward to joining everyone in DC on December 7th and to our show’s premiere next year at the La Jolla Playhouse.”

The award and an excerpt from the play will be presented at the Theater J annual benefit in person on December 7, 2021 in Washington, DC. The reading will be directed by the play’s dramaturg and Associate Director Amy Marie Seidel. Tickets for the benefit start at $350 and are available at TheaterJ.org/Benefit or by calling Theater J’s development office at 202.777.3225. Ticket buyers will also be able to view a live stream of the award presentation online.

“Tectonic Theater Project’s Here There Are Blueberries, by Moisés Kaufman and Amanda Gronich, is an astonishing and unforgettable piece of theater,” says Adam Immerwahr, Theater J Artistic Director. “The true story of a startling photo album donated to the US Holocaust Memorial Museum, the play examines how we tell the story of the Holocaust and how we should respond when confronted by the disquieting humanity of the perpetrators of some of the greatest evil this world has ever known. From the moment I put it down as I finished my initial read, I knew it was a play I would never forget—full of vibrant theatricality and provocative questions. The Theater J Trish Vradenburg Jewish Play Prize exists to shine a light on extraordinary Jewish plays like Here There Are Blueberries. ‘Mazel tov’ to these two writers and the wonderful team at Tectonic Theater Project.”

An album of never-before-seen Nazi-era photographs arrives at the desk of United States Holocaust Memorial Museum archivist Rebecca Erbelding. As Rebecca and her team of historians begin to unravel the shocking story behind the images, the album soon makes headlines around the world. In Germany, a businessman sees the album online and recognizes his own grandfather in the photos. He begins a journey of discovery that will take him into the lives of other Nazi descendants—in a reckoning of his family’s past and his country’s history. Here There Are Blueberries tells the story of these photographs—what they reveal about the Holocaust and our own humanity.

Moisés Kaufman is the founder and artistic director of Tectonic Theater Project, a Tony Award- and Emmy Award-nominated director and playwright, and a 2015 recipient of the National Medal of Arts. Mr. Kaufman’s Broadway directing credits include the revival of Harvey Fierstein’s Torch Song, the revival of The Heiress with Jessica Chastain, 33 Variations (which he also wrote) starring Jane Fonda (5 Tony nominations); Rajiv Joseph’s Pulitzer Prize finalist Bengal Tiger at the Baghdad Zoo with Robin Williams; and Doug Wright’s Pulitzer and Tony Award-winning play I Am My Own Wife with Jefferson Mays. His play The Laramie Project (which he wrote with the Tectonic Theater Project company) is among the most performed plays in America. Kaufman also co-wrote and directed the HBO film adaptation of The Laramie Project, which received two Emmy nominations for Best Director and Best Writer. He is an Obie Award winner and a Guggenheim Fellow in Playwriting.

Amanda Gronich (co-author, Here There Are Blueberries) has devoted her career to bringing real life stories to the stage and screen. An Emmy-nominated non-fiction scriptwriter, Amanda created dozens of hours of top rated programming for diverse broadcast networks. Over a ten-year career in television, she became the Supervising Senior Writer at Hoff Productions and worked as a series writer at National Geographic Television. Prior to this, Amanda was a charter member of Tectonic Theater Project, where she directed the company’s Toronto production of Moisés Kaufman’s Gross Indecency: The Three Trials of Oscar Wilde and was one of the group of artists who traveled to Wyoming and co-created The Laramie Project, later made into an HBO Film. Currently, Amanda works as a playwright and a script development consultant in theater and documentary television. She also teaches interview-based storytelling as a Master Instructor at the Moment Work Institute, using techniques she developed as an Adjunct Lecturer at the Graduate Program in Educational Theatre, City College New York. She is at work on a book about her original play devising methods, to be released by SIU Press.

Based in New York City and guided by founder and artistic director Moisés Kaufman, Tectonic Theater Project develops new plays using the company’s trademarked theater-making method, Moment Work™, and through a rigorous process of research and collaboration in a laboratory environment. Since its founding in 1991 the company has created and staged over twenty plays and musicals, including Gross Indecency: The Three Trials of Oscar Wilde, The Laramie Project, Doug Wright’s Pulitzer Prize-winning I Am My Own Wife, and the Tony Award-winning 33 Variations.

Theater J is a nationally renowned, professional theater that celebrates, explores, and struggles with the complexities and nuances of both the Jewish experience and the universal human condition. Our work illuminates and examines ethical questions of our time, inter-cultural experiences that parallel our own, and the changing landscape of Jewish identities. As the nation’s largest and most prominent Jewish theater, we aim to preserve and expand a rich Jewish theatrical tradition and to create community and commonality through theater-going experiences.

Theater J is a proud program of The Edlavitch DC Jewish Community Center (EDCJCC). Guided by Jewish values and heritage, the Edlavitch DC Jewish Community Center engages individuals and families through its cultural, recreational, educational, and social justice programs by welcoming people of all backgrounds to connect, learn, serve, and be entertained together in ways that reflect the unique role of the Center in the nation’s capital. The EDCJCC embraces inclusion in all its programs and activities. We welcome and encourage the participation of all people, regardless of their background, sexual orientation, abilities, or religion, including interfaith couples and families.

The Edlavitch DCJCC embraces inclusion in all its programs and activities. We welcome and encourage the participation of all people, regardless of their background, sexual orientation, abilities, or religion, including interfaith couples and families.