On the Road Theatre Review: ‘Miracle on 34th Street’ at Dutch Apple Theatre in Lancaster, PA 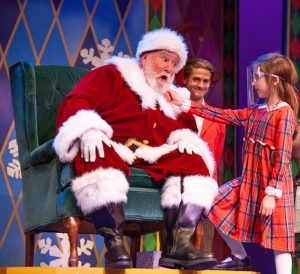 Dale Given as Santa. Photo courtesy of Dutch Apple Theatre.

There is a parade of trombones, the beat of snare drums, and a procession of young people in jaunty new band uniforms. We speak not of “The Music Man,” but instead another work by the same composer, Meredith Willson, who also penned the score for a Broadway musical based on the classic holiday film, “Miracle on 34th Street.” Dutch Apple Theatre in Lancaster, Pennsylvania, has brought this musical to life, complete with live orchestra, just in time for our own holiday. Emphasizing the jolly over than the occasional darkness of the original movie, the show is a wonderful gift for all, especially if watched with children.

…the show is a wonderful gift for all, especially if watched with children.

The story revolves around a woman, the unhappily-divorced Doris Walker, who has taught her daughter, Susan, not to believe in Santa Clause or other “fairy tales.” Mrs. Walker is an executive at the Macy’s Department Store and has hired a Santa who claims to be the real Kris Kringle. This ets up a magical story which is also filled with favorite holiday songs.

Directed with aplomb by Dean Sobon and choreographed with imagination by Kerry Lambert, stellar moments of this production include a wonderful “Toy Ballet” (a fine dream sequence in which Santa opens up the world of imagination to disbelieving Susan). A stand-out performance is given by Santa, played  by Dale Given. Mr. Given looks and acts the part of Kris Kringle, with a kindly demeanor, an infectious Christmas spirit, and a deep and hearty “Ho, ho, ho!”  He is joined by Megan Urz, playing Mrs. Walker in mostly comedic style. Marvin Shellhammer, a manager at Macy’s, is portrayed with great fun and flamboyance by Jordon Ross Weinhold, in both dance numbers and in speaking parts. His comic intonation and speech remind one of television comedian Paul Lynde. He is joined in these comic antics by Frank Hughes, playing department store magnate R.H. Macy himself.

This show does take some risks. Fans of the original cinematic and Broadway productions may remember that Mrs. Walker starts out with a hard edge, and R.H. Macy and most of the store employees are also rather serious. The Dutch Apple production instead leans into the holiday spirit, emphasizing joy and gaiety throughout the show. While this reviewer initially had concerns as to how emphasizing Mrs. Walker and Mr. Macy as lively comic personalities might affect the story, these were alleviated by the delightful effect the humorous personas had on the children in the audience, who clearly loved this approach. We were curious as to whether a less over-the-top comic approach might appear in evening performances, during which fewer children may be present.

The holiday atmosphere is ubiquitous throughout the show, as in a scene of Macy’s Thanksgiving parade with a carnival atmosphere, clown walking on stilts, dancers in colorful costumes, and a Thanksgiving Day float parading on the stage with an oversized model of a turkey surrounded by pilgrims. The show also has a bit of “The Music Man” present in terms of visuals and stylistics, including a version of “O Come, All Ye Faithful” set to march tempo.  This version works well, adding to the festive spirit. Other Christmas tunes abound, such as “Santa Claus Is Coming to Town” and “It’s Beginning to Look a Lot Like Christmas” (penned by Willson in 1951, long before the 1963 Broadway show).

Talented voices present “Pine Cones and Berries” and “It’s Beginning to look a Lot Like Christmas” in a counterpoint duet by Santa (Dale Given) and Susan (Cella Beradi or Kennedy Mitchell, depending upon performance). Megan Urz as Doris Walker and Michael Santora as her eventual new love interest, Fred Gailey, are in fine voice for “My Wish.”  “Here’s Love” is a fun, extravagant moment of singing and dancing by much of the cast—and a reminder that Willson’s musical version of “Miracle on 34th Street” was first entitled “Here’s Love” when it debuted on Broadway in 1963. “Bugles,” sung in Dutch by Mr. Gavin and Adalyn Rice or Cameron Smith as Henrika (depending on performance), is in this venue a pleasant reminder we are in Pennsylvania Dutch Country.

The staging is well done, with images of toys in prominence. The scene recreating Macy’s Thanksgiving Day Parade is perhaps the most creative. The props and sets are effective but not overwhelming, leaving something to the imagination of the audience. The live orchestra, conducted by J.P. Meyer, creates much of the atmosphere here and elsewhere through its exuberant playing.

The visitor to Dutch Apple Dinner Theatre will find the buffet before the show excellent but especially notable for local Pennsylvania Dutch desserts such as shoofly pie, peanut butter pie, pumpkin pie, and Dutch apple pie, which, after all, is the namesake of the dinner theatre. The visitor to Pennsylvania Dutch Country for Meredith Wilson’s “Miracle on 34th Street” is sure to have a memorable holiday experience, especially when bringing children or grandchildren.

Running time: Two hours and 20 minutes including a 20 -minute intermission.