Opera Review: ‘Come Home: A Celebration of Return’ presented by Washington National Opera at the Kennedy Center for the Performing Arts 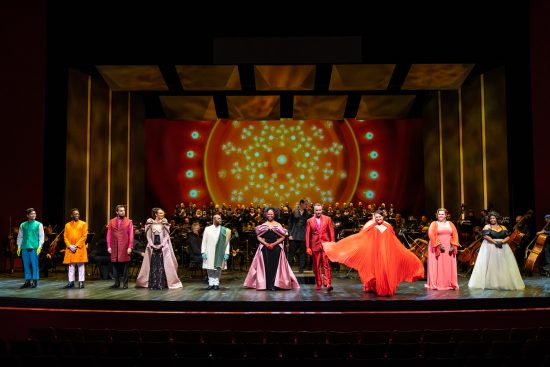 The cast of “Come Home – A Celebration of Return,” the Washington National Opera. Photo by Scott Suchman.

Under the baton of conductor Evan Rogister, the program opened with the overture to Richard Wagner’s Die Meistersinger von Nürnberg, accompanied by a video collage of images depicting the construction of the John F. Kennedy Center for the Performing Arts, a nod to the 50th anniversary (1971-2021) of the Center’s opening.

Opera aficionado and life-long advocate for the art form, Justice Bader-Ginsburg’s influence will be felt for generations, not least of all in her family’s gift of her baby grand piano, which will grace Washington National Opera’s newly renamed Justice Ruth Bader Ginsburg rehearsal studio and music library in Takoma Park.  Other donated items include some of the Justice’s books, opera recordings, and personal memorabilia as well as the costumes she wore when she appeared onstage in several of the company’s productions.

‘Come Home: A Celebration of Return’ plays through November 14, 2021, in the Opera House at the Kennedy Center for the Performing Arts, 2700 F Street NW, Washington, DC 20566. For more information or to purchase tickets, click here.