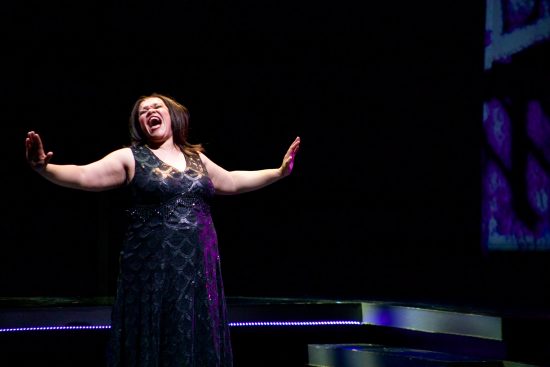 Gather a bunch of Black theater makers together and chances are that a majority of them will have had some association with “Dreamgirls.” After watching the current iteration currently running at Baltimore Center Stage, I couldn’t be prouder to be counted among their number. In the competent hands of the leaders of Arts Centric and their stellar team of professionals, this one reminds us why we love theatre.

…this one reminds us why we love theatre.

I’ve known the two powerhouses behind this production for more than 18 years. I met director Kevin McAllister and his partner, music director Cedric Lyles, when I choreographed a production of “Dreamgirls” for Baltimore City Community College. (I even appeared on stage in it a few times with them.) I have watched Art Centric’s progression from their days at Morgan State and their early production efforts to what has become a multi-award-winning and respected company. Seeing how much they’ve grown and just how excellent they are as reflected in this outstanding production does my heart good. Several years ago, I reviewed an earlier version of Art Centric’s production of “Dreamgirls”. I have to say that as good as that one was, this show is bigger, brighter, brassier, and bolder. They are not resting on their laurels or recirculating previously seen ideas. They have raised their own bar and danced over it.

Director (and budding Broadway star) Kevin McAllister has a lot of great ideas about how to stage a show, and there are a good many of them on display here. His use of screens in a three-panel arrangement to show projections of everything from historical content to moments of city life of the times was inspired. The word that comes to mind to describe the overall effect would be “balance.” McAllister balances moments of intensity with periods that let the audience catch their breath between bravura episodes. It is a well-guided and excellent approach.

Music Director Cedric Lyles is known for taking liberties with the scores of musicals, from “Aida” and “The Color Purple” to a good many others. He seems to have a “third ear” that tells him how a piece could sound if we just did ‘this part here like this.’ I’ve listened to the score of “Dreamgirls” many times and I heard orchestrations here that either weren’t as well-highlighted or were brand new creations. Mr. Lyles is a musical mastermind and has outdone himself—again.

I have also seen Shalyce Hernby’s choreography for this show previously and she somehow manage to top herself. She’s an artist with few peers in the area but the moves that stuck with me most were the ensemble work with the backup singers—a la The Temptations for the guys and the Supremes or the Ronettes for the ladies. This type of choreography looks deceptively simple. It requires a level of expertise to design and teach that is not for the faint of heart—and Ms. Hernby ain’t scared of nothing.

Rounding out the work of the creative team, with no less acclaim or level of achievement, are the gorgeous costumes by Kitt Crescenzo; Patrick Lord’s terrific projections; Corey Brown’s beautifully-executed lighting design that illuminate Emily Lotz’s perfectly appropriate sets; and all the other assistants and helpers from the dressers to the production team. Kudos and huzzahs to all of them! There were a few minor issues with the sound system that I’m sure will be ironed out with a little more time.

The ensemble is actually what I have almost come to take for granted with Arts Centric productions. As with any locally-sourced company, the proficiency level has a definite range but as always, there are no weak links here. Every one of them can hold their own. Some shine like a brand new silver dollar, but they are all money. Their handling of Ms. Hernby’s choreography and Mr. Lyle’s choral parts was a delight to behold and hear.

Supporting cast members were extremely well-cast with standouts everywhere. I’d love to single out all of them because they deserve at least an honorable mention. If I have to pick one, it would be Tyrell Stanley as CC who brings a touch of naiveté to the part that is like having your own little brother on stage.

Curtis McNeil as Marty reminds one of the long-suffering uncle who really does want what’s best for you but you’re too hard-headed to listen. His is a strong, steady presence. In the thankless role of Michele—who joins the Dreamgirls after Effie is kicked out—Whitney Jefferson is very effective.  Every production needs a worker bee who turns up in multiple roles, and this outing benefits from Ryan Holms, who plays every part with skill.

Raquelle Jennings deserves the award for Most Growth In A Single Performance. Her Lorrell transforms from a gawky, shy teenager to a grown woman over a span of two acts. Her voice shows a degree of maturity with each successive vocal outing. By the time she reaches her final showdown with the duplicitous Jimmy Early, each run is infused with a confidence that tells the world exactly who this character is.

Jodeci Millhouse’s Deena is a little more tame than I’ve seen in other productions, but her well-trained voice is as lovely and nuanced as her acting is sincere. In the early part of the show, when she is a star-struck wannabe in awe of her older friend Effie and a definite satellite, she is as winsome and engaging as the nice kid next door who is always happy to tag along in someone else’ wake. As she evolves into a superstar, Ms. Milhouse’s take on the character is to never lose that wide-eyed innocence, right up to the moment where she finds her own voice and walks out on her criminally-cruel husband, Curtis.

What a Curtis we have on hand this time around. Dana Nearing is seductively slimy in a role that is no less compelling for his lack of likability. Velvet voice and easy on the eyes, Nearing’s Curtis slithers around the stage like the snake in the Garden of Eden—promising delights and treasures, and delivering just enough to keep his followers in line. When his comeuppance is delivered, it’s the audience who gets the satisfied smirk.

Normally, when I cover productions of “Dreamgirls, it’s the main character of Effie that I save for last and get all gooey-eyed and mushy about what a star the actress is. That is just as true with the incredibly talented Crystal Freeman leading the parade. This time out, that spotlight is shared with Bryan Jeffery’s Jimmy Early. Every superlative adjective I use with one to describe the voice and hold on the audience, I could as easily ascribe to the other. There are a couple of obvious differences in their approaches to their characters. Effie is a rather humorless role that can be unsympathetic and downright annoyingly self-centered. In the hands of a gifted and blessed powerhouse like Ms. Freeman, it is nothing short of show-stopping in number after number. Mr. Jeffrey wraps the audience around his silly little finger with those sinewy hips and that earsplitting falsetto—a spot-on homage to James Brown—and the fact that he can get laughs by doing nothing other than standing still and raising an eyebrow. Here are two stars and two star turns—I am glad I don’t have to choose.

The collaboration between Arts Centric and Baltimore Center Stage is long overdue and I hope heralds the beginning of a beautiful friendship that perhaps could be emulated all over town. When organizations with similar goals and interests work together—each bringing their “A” game to the table—that is a win-win for all of us.