Theatre Review: ‘Blood at the Root’ at Towson University 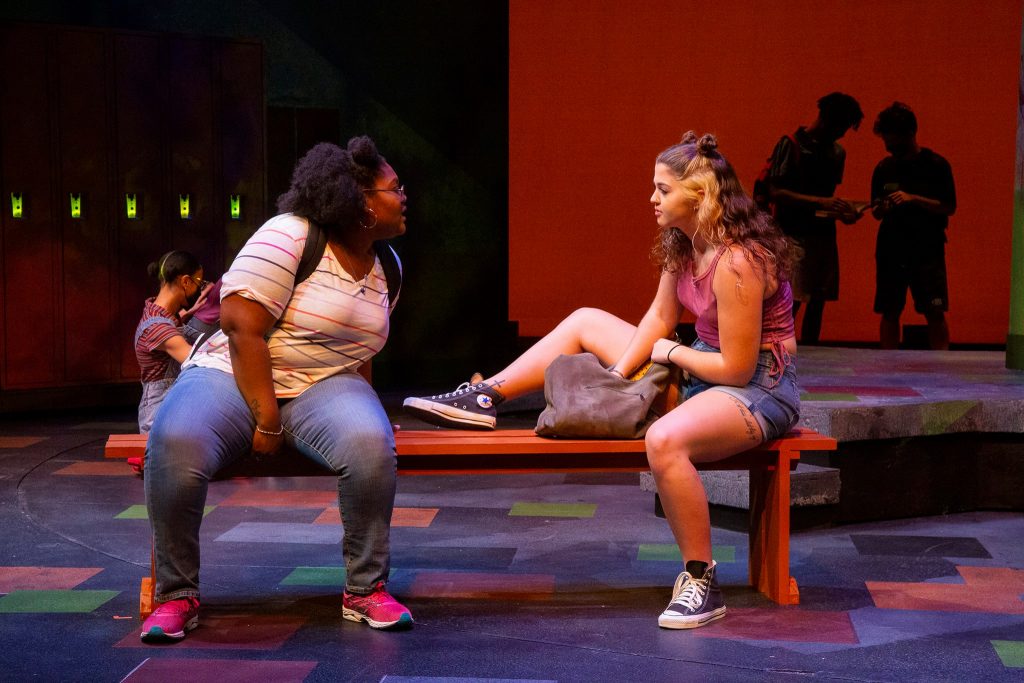 Fifteen years ago, six Black students at Louisiana’s Jena High School were arrested, accused of attacking a white student. The case of the “Jena Six” gained wide notoriety, in part, because of months of escalating racial tensions at the school prior to the incident. Other violent confrontations between White and Black students had occurred. The main building of the school was destroyed in a fire of suspicious origin. Perhaps the most inflammatory event, though, was the discovery of nooses hanging from a large tree in the school’s courtyard.

Southern trees bear a strange fruit
Blood on the leaves, and blood at the root
Black bodies swinging in the southern breeze
Strange fruit hanging from the poplar trees
– Abel Meeropol, 1937

A few years after the Jena Six case, Dominique Morisseau was commissioned to write a play for the School of Theater at Penn State University. She based “Blood at the Root” on the case of the Jena Six. In the play, she explored the intersections among justice, bias, and identity, framed by the urgencies and discomforts of adolescent life—an exploration to which she would return in the 2017 play, “Pipeline” (read our review of this year’s Theatre Morgan production here).

This month, another Baltimore-area school is tackling Morisseau with “Blood at the Root,” presented in the Mainstage Theatre at Towson University. The production is deftly directed by Ruben Del Valle, Jr., who also provides choreography and sound design. The play is written for a cast of six, but Del Valle has supplemented them with a background ensemble of nine, as well as the locally famous beatboxer, Dominic Shodekeh Talifero. The latter opens the show, dressed as a janitor and mopping the stage while creating ominous sounds and rhythms into a well-concealed body mic. Shodekeh reappears many times throughout the play, serving as connective tissue, as well as underscoring or as an accompaniment, to Del Valle’s electrifying movement sequences.

The central characters consist of students at Cedar High (renamed by the playwright, possibly for the consonance of “Cedar Six”). Raylynn (Dersha Horrey) is determined to “break a rule or ten,” the first of which is to be the first Black student to run for council president. Her best friend, Asha (Danielle Kellner), is “Black by association.” Justin and Toria (Lenox Kamara and Mel Gabel, respectively) operate the school newspaper, with uptight Justin more concerned with layout design than content, while Toria casts herself as the rebel journalistic truth-seeker. Raylynn’s brother, De’Andre (Paris Foster), is on the football team along with white transfer student, Colin (Max Stover).

Divisions at the school go far deeper than typical teenage cliquishness. Cedar High is in a small town in the deep south, and even in 2006 (or 2021, for that matter) the normalization of bias is real and powerful. Rule-breaker Raylynn, noticing that a prominent oak tree serves as a gathering spot for groups of exclusively White students, decides to invade. Reaction the following day is viewed as a hate crime by some and a “prank” by others, including the school’s administration. The fuse is lit. White quarterback Colin, meanwhile, is persecuted for other reasons. Toria is hard at work covering the tree incident for the newspaper. “Just the facts” Justin doesn’t want an exposé, reminding Toria that objectivity “is in the cracks.” Toria’s response that “truth is in the color” is a loud proclamation of the playwright’s own voice.

Performances by all six principals are first-rate. Horrey is particularly laudable for giving Raylynn an unambiguous resolve which somehow meshes neatly with of the character’s uncertainties of youth. Kamara and Stover deliver pained soliloquies about their identity conflicts. Kellner sparkles as a character whose own identity is ultimately threatened. Gabel is explosively passionate and delightfully profane.

Daniel Ettinger’s set employs the Towson Mainstage’s revolve, with a large cylindrical column dead-center. That’s the oak. There’s not much other scenery needed—a bank of lockers here, a folding table there—as the production relies much more on the lighting design of Jaeden Arrington to establish visual changes. A great many wonderful transitions and effects are created by Arrington (with mentorship from TU stalwart, Jay Herzog), including one in a jailhouse scene where a circular pattern of latticework gobos slowly converge at center, as a tightening grip on De’Andre, awaiting trial. Del Valle’s sound design, including Shodekeh’s live beatboxing, is dynamic and energetic. But sound might be this otherwise excellent production’s Achilles’ heel. The dialects demanded of the actors, coached by Teresa Spenser, unfortunately combine with too-loud underscoring at times, and the use of plastic face masks at other times makes it very hard to understand a lot of the lines being delivered. Luckily, sound levels can be adjusted and face masks are only worn by the ensemble (and might easily be switched to cloth, trading visual transparency for sound transparency). We attended a preview performance for this review so these issues may well have been addressed by opening night.