Theatre Review: ‘Dr. Seuss’ How the Grinch Stole Christmas! The Musical’ at The National Theatre 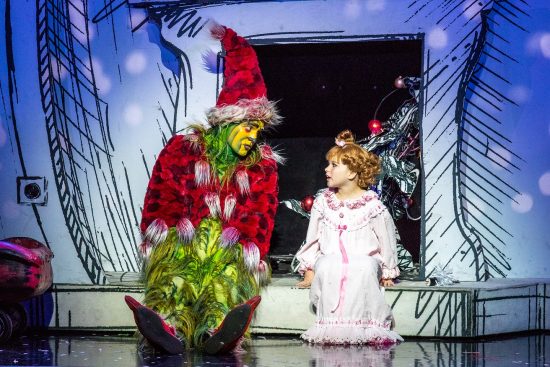 Philip Huffman as The Grinch in the 2016 Touring Company of “Dr. Seuss’ HOW THE GRINCH STOLE CHRISTMAS! The Musical.” Photo courtesy of The National Theatre.

If the world seems rude and sad and dreary, there’s a way to make your Christmas feel much more cheery! Grab the kids (it’ll be a cinch), then head to The National to see “The Grinch!”

That’s about the extent of my rhyming prowess, but if you’re hankering for more poetry, “Dr. Seuss’ How the Grinch Stole Christmas! The Musical” at The National Theatre in Washington, D.C. is where you want to be.

The Grinch isn’t the only one whose heart grew three sizes after listening to Nesanelis’ rendition of ‘Santa for a Day.’

You know the story. The citizens of Who-Ville possess an indefatigable amount of Christmas spirit but the mean, ol’ Grinch, who lives on the mountain above the town, most certainly does not. This iteration of “The Grinch” (directed by Matt August, with music direction by Peter Leigh-Nilsen and choreography by Bob Richard) follows the plot of the 1957 picture book (and the timeless 1966 TV special) pretty closely, rather than incorporating the expanded backstory that the 2000 Jim Carrey movie provided. While I have nothing but respect for the original, I think that’s a shame. The show (written, along with the lyrics, by Timothy Mason) would be much more appealing to adults with a bit of exposition and a few wink-of-the-eye jokes that go right over kids’ heads (a la “Shrek” and the like).

What we have here is a musical that will knock it out of the park with the three- to 10-year-old set. When audiences are emerging from their COVID hibernations and looking for a way to bring the family together for the holidays, that’s OK. What the show lacks in sly quips, it makes up for in effervescent talent, starting with W. Scott Stewart. He narrates the story as an older version of the Grinch’s dog, Max, who is looking back on the antics that occurred. It’s Stewart who vocalizes the timeless tune, “You’re a Mean One, Mr. Grinch”—a task that suits his deep voice impeccably.

The titular character is performed by James Schultz, whose boisterous energy and animated facial expressions are what people have come to expect from the role, post-Jim Carrey. There’s no lack of enthusiasm from any of the actors, which include Xavier McKnight (Young Max), Ashley Margaret Morton (Mama Who), Eduardo Uribe (Papa Who), Christine Aziz (Grandma Who), and John Anthony Lopez (Grandpa Who). The role of Cindy Lou Who alternates between Sofie Nesanelis and Quinn Titcomb. We saw the former and she is, in a word, precious. I’m sure I’m not the first and I definitely won’t be the last to wonder how that big voice comes from such an impossibly tiny child. The Grinch isn’t the only one whose heart grew three sizes after listening to Nesanelis’ rendition of “Santa for a Day.”

This musical is campy, quirky, but most of all, cheerful. After the past couple years, isn’t that what we all need this holiday season?

Running time: 85 minutes with no intermission.

“Dr. Seuss’ How the Grinch Stole Christmas! The Musical!” runs through December 5, 2021 at The National Theatre, 1321 Pennsylvania Ave NW, Washington, DC 20004. For tickets and more information, visit The National’s website.