Theatre Review: ‘Elf the Musical’ at The Newtowne Players 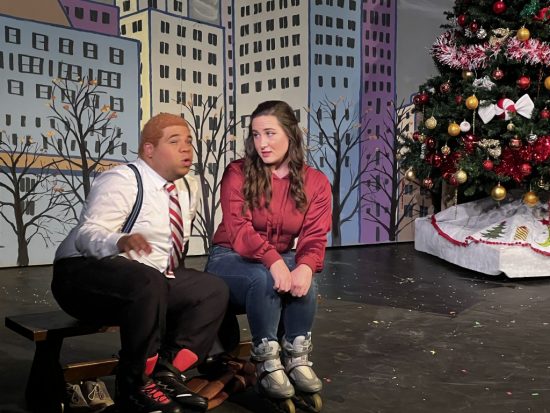 Christmas has arrived early in the Southern Maryland theatre community. After a complicated year, we all can allow ourselves an extra early bit of holiday cheer. Holidays possess a unique ability to whisk us away to more nostalgic and whimsical times—and Christmas is no exception. The Newtowne Players’ newest production of “Elf the Musical” provides an escape into the ethereally festive Christmas spirit.

Based on the 2003 Christmas film of the same name, “Elf the Musical” tells the story of an orphaned human named Buddy who was raised by Santa Claus’ elves at the North Pole. When Buddy finds out he is not an elf, Santa sends him on a journey to New York City to meet his biological father and discover what it means to be human and part of a family. In recent years, the original movie has garnered cult status and you either love it or hate it. I am happy to report that the stage version is far more enjoyable for just about anyone, regardless of how one feels about the movie.

Direction by Timothy Joyce brings an authentic joy to this production in a palpable way that instantly envelopes the audience from the first scene of the show. Everything from the expert precision of his casting choices, the creatively executed elf puppets with an “Avenue Q” vibe, to the little blink-and-you’ll-miss-them fine details truly brought this story to life in an unexpectedly fresh way. One moment the audience was being served some welcome 90s parent vibes from Buddy’s dad and step mom (played wonderfully by Pat Schoenberger and Dawn Webber, respectively) and the next, you would swear you are witnessing what the actual Santa Claus (earnestly played by Paul Rose) would look like in person.

Chris Maulden’s set design was quite ambitious, especially for a Christmas production. It consisted of a beautifully hand-painted, full-stage backdrop (artfully done by Ruth Collins) that spins throughout the show to divide the story between the North Pole and New York City. There are also strategic set pieces that come on and off the stage to convey the change of setting. In particular, the office set had the fascinating set piece of a paper shredder. The mystery of how it worked was part of the magic of the well-executed, technical aspect of the show.

The entire cast was impressive. They worked together as a cohesive team, adding depth to an otherwise simple story. Of particular note in the ensemble were Skylar Hepner, Brandon Maher, and Garrison Smith. Hepner brought such a hysterical ebullience to every character she played (especially Walter Hobbs’ eccentric assistant) and had me dying with laughter. Maher’s portrayal of the store manager at Buddy’s first job felt extremely accurate to retail bosses during the holidays. Smith’s sardonic style was tongue-in-cheek iconic. It was impressive to see a teenager hold his own in a company full of mostly adult actors.

The two actors who had me entranced with their performances were Kenneth Faison as Buddy and Kellie Podsednik as Jovie. I was hoping Kenneth Faison would get the role as Buddy based on his exuberance in prior productions in which I have seen him. Joyce’s casting of Faison was absolute genius and the actor’s character work for Buddy was incredible—he completely disappeared into the role. There was a very minor wardrobe malfunction and Faison swiftly took it all in stride. His improvised lines had the audience roaring with laughter and it was one of the best theatre snafu recoveries I’ve ever witnessed.

Podsednik portrays the character of Jovie with complete authenticity in both the comedic and dramatic moments—and she possesses a stunning singing voice. Her chemistry with Faison was impeccable and both actors had me rooting for their characters the entire time.

If you’ve been feeling run down by the craziness of the past 18+ months, then The Newtowne Players’ gleeful dose of Christmas cheer may be just what the doctor ordered. It is not to be missed. The opportunity to see this production may be the best early Christmas present I have received this year.

Running Time: Approximately 2 hours and 30 minutes with one 15-minute intermission