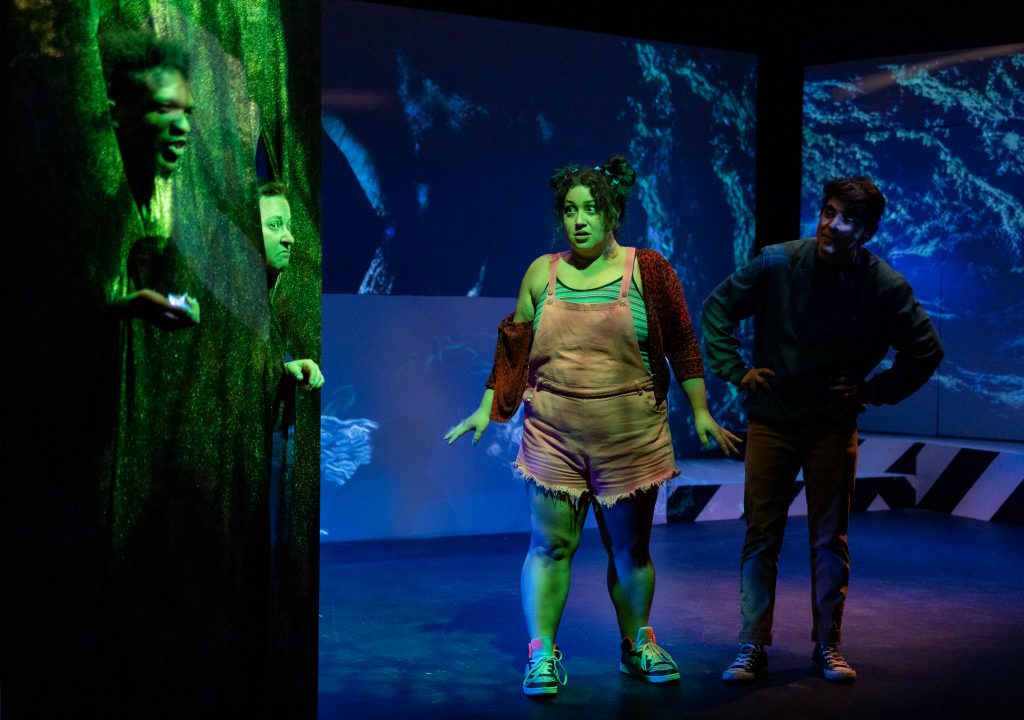 Imagine a story of an 11-ish-year-old girl caught up in a catastrophic weather event. It lurches her away from familiar surroundings and forces her to embark on an epic, heroic adventure so that she can return home. Along the way she meets some kooky characters who help her fight monsters and evil-doers. Sound familiar? Now shift that story from old Kansas to contemporary San Diego, replace the terrier with a little brother, re-imagine Dorothy as an empowered, strong-willed badass, and throw in a holiday angle. What you get is José Rivera’s “Maricela de la Luz Lights the World,” currently running at Fells Point Corner Theatre. As the second show of FPCT’s season, “Maricela” has the daunting challenge of following last month’s superb “Wit” (our review). Fortunately for the company and its audiences, this production is an absolute delight.

…an absolute delight…smart, joyful, and certain to dazzle every generation.

“Maricela” is far more than just an excellent “Oz” rewrite. Its themes are shifted to a 21st century perspective, and come across as very fresh and inspiring. The central character, Maricela, is chock-full of agency and might. She has her moments of fear and uncertainty in the face of peril, sure, but this girl won’t be seen trying to hide behind a scarecrow’s coattails. She owns her journey, protects her brother Riccardo from the bad guys, and, naturally, saves the day in the end.

Director Daniel Douek—well-known in Baltimore for his acting—orchestrates some incredible things on the small stage. With the help of jaw-dropping design work, Douek has blocked a long, arduous trek through many different settings without a single interruption for scenery change. His pacing and rhythm are intuitive and highly engaging. Movement choreography by ensemble member, Torreke Evans, is gorgeous— even the seamless manipulation of set pieces by crew member, Breanna Stewart, are artfully planned and executed. There are many different worlds explored by these characters, and Douek chose an ingenious way to present them all. Rather than employing myriad painted flats or backdrops, designer Brian Douglas’ set is simple. Lighting, also by Douglas, is deeply saturated and sharp. The tech star of the show, however, is the projection work of Sebastian Sears (with a big assist from Bruce Kapplin). It’s 2021, and we’ve all seen video projections used in theater. For Maricela, the team at FPCT must have thought ‘if one projector is good, two is better. Or, heck, how about seven?’ Yes, there are seven projections going, pretty much constantly, and the result is amazing. Taking advantage of a long break between productions, the team spent a full two weeks in tech rehearsals preparing this show, and the imagery that results is as well-choreographed as the actors.

Jess Rivera stars as Maricela de la Luz (“of the light”). Her program bio mentions a credo, “Always take your space,” and does she ever. Rivera takes complete command of the stage here, in a role that seems like it was written for her. She gives Maricela all the backbone she needs, and more than her many foes can handle. In a single word, Rivera’s performance is “Wow.” Maricela’s kid brother, Riccardo, is played with wide-eyed wonder by Alexander Velasco Suro. It can’t be easy to match energy with Rivera, but Suro does exactly that. In fact, it is the sibling chemistry between these two actors that not only carries the play, but creates human work so strong that it prevents the amazing technical work from taking over the story.

A truly fine ensemble of four actors portrays all of the characters Maricela and Riccardo encounter. Evans, mentioned above, takes turns as a “certified, stupid nut case” moon god, a kidnap-victim sun god, Jason (of the argonauts), and several others—all with grace and pizzazz. Dorian Elie gives us a sleepy Hercules, a malodorous Cyclops, and more, delivering big laughs and surprising poignancy at times. Another of the oddball deities, a “goddess of the U.S./Mexican border,” is played by Talia Segal, who is also a woeful Orpheus and a mute Adriana. Segal does great work with her face, particularly when she can’t speak. Stage stalwart, Helenmary Ball, covers the antagonist parts—a seven-headed Hydra (two of them appear to be Trump and Hitler), a manipulative Voice of the Fog (Ball’s voice is recorded and pantomimed movement is by Stewart), and the main villain of the piece, Loki. Ball plays Loki as half-Grinch, half-Wicked Witch.

Ball is also responsible for the costume design. All of her work there is delightful and inventive. NJ Saroff, the stage manager, adds make-up to their duties and provides wonderful, evocative detail. Sarah Weissman serves as dramaturg, and herding all of the cats is Marianne Gazzola Angelella, the show’s producer.

José Rivera wrote the play as a commission for Seattle Children’s Theatre, and it premiered in the San Diego suburb of La Jolla. ‘Hey wait, this is a children’s play?’ one might think. Well, its origin is certainly there, and we heartily recommend the show for young audiences, but please don’t cubbyhole it. This production, in particular, is smart, joyful, and certain to dazzle every generation.

The theater’s Ann Street neighborhood includes a sizable Latinx population, and the company is working hard on outreach to bring in the locals. Some of them may have trouble finding seats, though, as one expects multiple sellouts of this show where “all the adults in the universe are flipsoid today!”

Running Time: 58 minutes with no intermission.