Theatre Review: ‘My Children! My Africa! at Washington Stage Guild 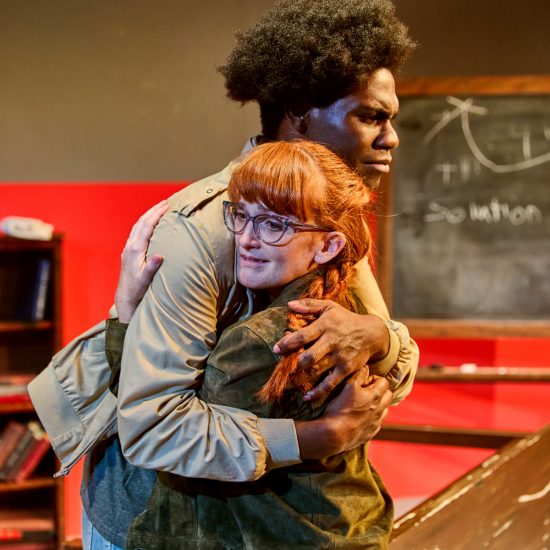 Jordan Brown as Thami Mbikwana and Libby Barnard as Isabel Dyson in WSG’s ‘My Children! My Africa! Photo by DJ Corey Photography.

Washington Stage Guild’s current production of ‘My Children! My Africa!’ is as relevant today as it was in 1989. Thirty-two years have passed, and Black people are still affected by centuries of systemic racism, and white people are still asking Black people to do the emotional and intellectual and psychological work of deconstructing and demolishing racism for them.

Barnard and Brown…burn up the stage and it’s a catharsis for the audience as well.

Gerrad Alex Taylor reverently directs Athol Fugard’s play. The script has a lot to say, and unspools much of it in monologues and a few soliloquies. Some of it borders on preachiness (but it has been 32 years since it was written), but the actors are so good that the feelings and concepts sound fresh.

“My Children! My Africa!” is set in Camdeboo, South Africa, in 1984. Part of Cambdeboo contains a Black neighborhood called “The Location,” which is considered by the white population as an eyesore and dangerous. Isabel (Libby Barnard) is from a white girls’ school and comes to the Black high school to debate Thami (Jordan Brown) on feminism before an audience of Black students. She wins the debate, but when the two talk after the debate, the beginnings of a friendship start to bloom. This development encourages Mr. M (DeJeanette Horne), Thami’s teacher, to persuade the two of them to collaborate on an intra-school literary contest. He also believes that in this area of rigid apartheid, this will help show that the races can cooperate toward a shared goal. And if the pair win, there could be a scholarship for Thami. Isabel acknowledges that she was fearful of her reception in a Black school, but because Thami welcomed her and they have stayed in contact, she’s thrilled to participate. So thrilled, in fact, that she lunges at Mr. M and gives him a hug, startling him and causing him to throw his arms up in the air to avoid touching her. She doesn’t realize this. That seems incredibly naive of an 18-year-old white girl in South Africa, but this is 1984. She’s lived a very sheltered life and the only two Black people with whom she has regular contact (besides Thami, now) are the family’s cook/housekeeper/nanny, and her father’s delivery boy (the father runs the chemist shop in town). She is in for a devastating awakening.

Mr. M is a somewhat enigmatic character—relentlessly cheerful, a firm believer in education as the way to end apartheid, a believer in working within the system, and a man who views his role as teacher as a sacred calling. He is 57 at this time and has lived his entire life under apartheid. Horne brings a hero’s doomed tragedy to his mistakes and his atonement, and we see, shatteringly, the deep abiding love and despair he has for the children and for Africa.

Thami is Mr. M’s unspoken protege. Mr. M sees him as the once-in-a-lifetime student who is capable of going on to do great things and help change their world. But as steeped in tradition as Mr. M is, he fails to recognize that Thami is also 18, and very aware of oppression of the majority of people in his nation—and that it’s getting worse. Thami, who had agreed to be part of the literary contest, is pulling away from Mr. M and from Isabel, and spending more time with the younger generation who are agitating more openly and violently for change.

One of the most interesting story arcs is how Isabel—by nature a fixer and confident there’s always an answer to any problem—is forced to confront the ugly reality on which her and Thami’s country is built. When Thami refused to reassure her and gloss things over to protect her, she panics. Their team falls apart and they part ways in an anguished scene. Later, towards the end, she comes to find him, and in their final confrontation, he forces her to do the work to understand why there is a time of change coming. Yet, they care enough to cling together for a long moment—recognizing how far each has come, how each is human. The scenes in the second act between Barnard and Brown are fierce, ugly, and raw, and yet, hopeful. These two burn up the stage and it’s a catharsis for the audience as well. Truth has finally been told.

Tiffani I. Sydnor is the set designer and crafts a simple set that is eloquent of the separateness of the Black population—a chalk board, a bookcase underwhelmed with books, a stool, a few straight chairs, and cinderblock with peeling paint. The lighting, designed by Marianne Meadows, highlights the hours and months going by. At times, it seems almost nostalgic then slowly darkens. Kaydin Hamby, the sound designer, wields a mix of African songs and, at times in the show, a nearly subliminal drumbeat increases the tension. Cheryl Yancy designed the costumes. Fittingly, Mr. M is always in a suit—pressed, pale tan fabric, crisp white shirt, tie firmly around his neck, polished shoes—the embodiment of tradition and the belief that Black people must continue to work hard to prove they deserve to share in the economic, cultural, and social life of South Africa as equals. Isabel wears a schoolgirl’s uniform of a skirt, vest, shirt and tie, with navy knee socks and plain, black, flat-heeled shoes. Thami wears the boys’ version—shorts, jacket, shirt, knee socks, and plain black shoes. In Act Two, as Isabel and Thami grow by leaps and bounds, their clothing becomes more adult. Yancy found jeans for Isabel that just scream 1989—high-waisted pleated, a little baggy. The jeans change how Isabel carries herself—more adult, less coltish, and a little less trusting. It’s amazing what a pair of jeans can do.

Act One is slightly stately in it’s pacing and length. But Act Two brings the heat and the storm and ratchets up the tensions in these three characters’ lives and, by proxy, in the wider world. The parallel to our current social unrest and divisions in this country is frighteningly relevant. This production of “My Children! My Africa!” is well worth seeing, discussing, and taking those lessons to heart.

Show Advisory: Some adult language in the second act.