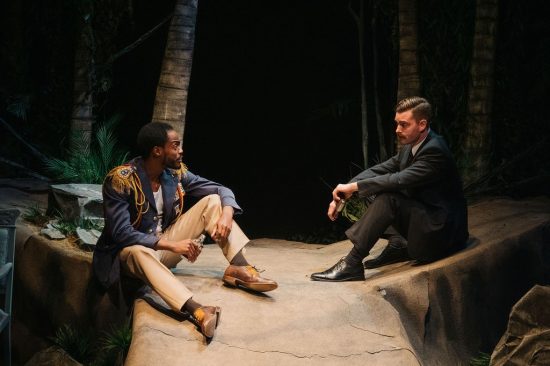 Keegan is currently presenting the regional premiere of “N” by Adrienne Earle Pender. This is a quick exploration of race, culture, and the heavy lifting Blacks did (and still do)—mentally and emotionally—in a white-dominant world. The story is about Charles S. Gilpin, the first Black actor to play on Broadway—in a work daringly written about a tragic Black figure on the scale of a Lear by the rising, but not yet star, Eugene O’Neill. Then there’s the N word, a word so demeaning that Gilpin (an intense Kevin E. Thorne II) can’t finally bring himself to utter it anymore. The fact that the N word is in the play over 30 times, and O’Neill just can’t understand the repugnance Gilpin feels, only underscores the ultimate chasm between the two men, and the races in the United States.

In 1920, O’Neill wrote “The Emperor Jones” and insisted on casting a Black lead. While the play is full of stereotypes about Black people, Gilpin wants the role (and not just because it pays $50 a week). He sees it as a chance to pave the way out of minstrelsy for Black actors. It seems some breakthrough might be achieved when the play is a hit, first regionally, then on Broadway. He wows audiences and critics, bringing O’Neill’s words to pulsing life. And that’s a problem—they are O’Neill’s words which he wrote based on how he thinks Black people are. For all his protestations of belief that Gilpin and he are equals and his seeming readiness to share a drink (that was one busy flask) and debate with Gilpin, it isn’t real.

This dynamic is especially revealing when Gilpin is debating/arguing with O’Neill over the use of the N word by Black men with other Black men—at the behest of a white man. There’s is a whiff of white privilege and superiority on O’Neill’s part. No matter how he insists that they are his words and must be said as is because he is the playwright, one can’t escape the fact that he dismisses what Gilpin says. In one deliciously revelatory scene, O’Neill mentions to Gilpin that he would love to see him play Shakespeare, specifically Othello. Gilpin is underwhelmed at the idea of a Black man playing a Black man. When he bursts out with one of Othello’s speeches and silences O’Neill, it’s a gauntlet moment. O’Neill is surprised that a Black man would have read Shakespeare, much less actually know the play. Gilpin seems to understand that, at that moment, he will never be more than a Black actor to O’Neill. You can feel the frustration.

It is when Thorne as Gilpin is speaking that the play truly shines. His moments as The Emperor Jones are riveting. He speaks the patois as written—mostly—but the emotion comes from so deep inside that it’s like watching Icarus challenge the sun. As O’Neill, Graham is adept at hiding his true feelings until he’s pushed by his Emperor Jones to see him as an equal. In some ways the performance feels very quiet.

Lolita Marie plays Florence Gilpin, Charles’s wife. For most of the play, she’s the supportive wife, the practical voice of reason, and a woman who armors herself against the slings of racism in her work as a maid by believing in her husband and protecting her family. One of the play’s most enthralling moments is at the end when she and Graham meet at Charles’s funeral. She’s courteous and devastatingly so and implacable in spelling out what that role cost her husband and her family. One wishes she had had a deeper role overall.

The set by Matthew J. Keenan is intriguingly trisected—the Gilpin’s living room on one side, O’Neill’s office on the other side of the stage, and the middle, back, and sides taken up by the set of “The Emperor Jones.” It’s an uneasy juxtaposition and underscores then tensions between the two men and the larger tensions between the races. It’s an innovative use of the space.

Lighting designer Venus Gulbranson mostly keeps the lighting at half mast. There’s always a sense of jungle twilight. Costume designer Paris Francesca created a half-ripped military costume for Thorne as The Emperor Jones that reeks of tragedy and events spinning out of control. The director, Nadia Guevara, keeps the tension building while taking tight, emotional control. It’s somehow more devastating than fireworks would be.

This is a rather reserved play, given the material. It is an imagined idea of what could have transpired between Gilpin and O’Neill. The playwright, Pender, is a descendent of Gilpin. And yet, perhaps because of that sense of reserve, you feel the the long arc of how Black actors have to adapt to theatre still today. The play makes its points without pushing and shoving and doesn’t have to. It presents theatrical reality and you have to deal with it—an inescapable reckoning, long past due, and one you won’t forget.