Theatre Review: ‘The Addams Family’ at Children’s Theatre of Annapolis 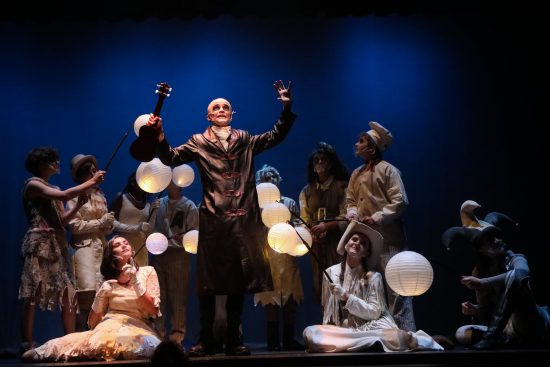 For many years, the Children’s Theatre of Annapolis (CTA) brought the magic of the stage alive with productions including Mary Poppins flying in to help the Banks children; Dorothy melting the Wicked Witch of the West with a pail of water; and Chitty Chitty Bang Bang flying in the air to rescue Grandpa Potts from Vulgaria.

This year, the CTA musical production for older students is “The Addams Family” featuring the antics of a favorite family that was first made popular with the success of the 1960s sitcom. Yes, the show begins with the catchy, favorite theme song, and the audience responds with an automatic snapping of their fingers. But the show proceeds into a deeper exploration of family, love, and what exactly “normal” really is.

…a deeper exploration of family, love, and what exactly “normal” really is.

The opening number “When You’re an Addams” introduces the family, ghoulish and loveable as ever, calling up their ancestors from their crypt in New York’s Central Park. As family members leave, Uncle Fester—played less as a nutty comedian and more as a wise and caring spirit by the amazing Finn Hintermister—is adamant that love must win in the end before the ancestors return to their resting place.

At the beginning of the show, Rosalie Hess commands the stage as a black-clad, pigtail wearing, hunched over Wednesday Addams. Her rendition of “Pulled” explodes on stage as the belts out her confusion of loving a “normal” guy.

It is hard to imagine a more perfect Gomez than Annapolis High School senior, Liam O’Toole. His Latin style vigor, his curly hair, his vocal talent and his charisma make him a lovable patriarch of the family—a loving father and husband who is pulled between his daughter and his wife, Morticia, played by the sultry dynamo Erica Yamaner.

Wednesday’s fiancé, placed by the fresh-faced Andrew Wilson (Lucas Beineke) with good intentions and unbridled optimism, brings his own mom and dad to dinner to the Addams’ household. The addition of the Beineke family for dinner results in a flurry of revelations. The star of the dinner was Alice Beineke, Lucas’ mother played by the phenomenal Finola Hughes. Her “Full Disclosure” performance, revealing an intense confession of her unhappiness with her marriage, showed an exceptionable vocal range and mature expression with an offbeat and entertaining style.

In this show, the members of the ensemble, the ancestors, are a critical part of this production. They sing and dance with the main characters and lead the audience through the show’s theme of “nothing is really normal.” Atticus Boidy, the director of the show, said, “The ancestor ensemble is featured much more than is originally scripted and have been given a bit of a makeover. With diversity equality, inclusion, and belonging in mind, a multitude of changes were made to character descriptions of ancestors and with dialogue between characters in the show. Because the main theme of this show is acceptance, it only felt right to make these necessary changes to the way the production is traditionally produced.”

Kudos all around to the creative team for their visual design of a creepy, but downright lovable, show. Set designer Todd Croteau took director Atticus Boidy’s vision and made the entire stage appear to be the inside of the rickety old mansion, with a long and dilapidated staircase, portrait frames empty and askew, and a door to the playroom or the dungeon, depending on your point of view. Music director, Emily Sergo, ensured the young actors’ musical contributions were heard, understood, and sung with passion, whether it was the storytelling in “Clear Intentions” or the edgy “Tango De Amo,” just one of the dancing triumphs from choreographer Kristen Rigsby. One of the most beautiful scenes of the production was Uncle Fester proclaiming his love for the moon. The ensemble held lit lanterns and the talented ballerina, Cate Weiss, performed as he declared his love—a beautiful testament to the power of his commitment.