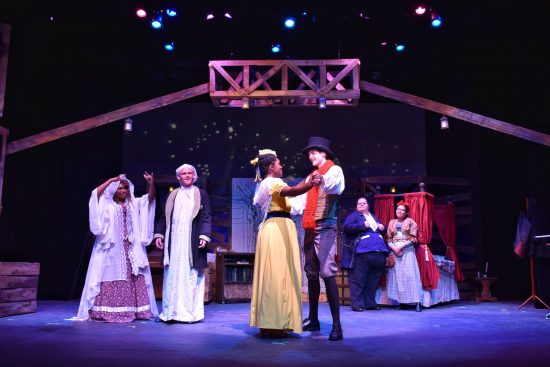 Scrooge is shown a window into his past. From left to right: Shemika Renee, Jacob LeJeune, Nyla Brown, Gabriel McKay, Tessa N. Silvestro, and Erica Juarez.

One of the most beautiful qualities of live theatre is its capacity to elicit specific feelings of comforting memories and nostalgia. Whether it’s a piece of childrens’ theatre evoking fond childhood memories or a holiday production recalling remembrances of Christmases past, theatre possesses a divine capacity to bring solace during the most challenging times of our lives. Port Tobacco Players’ (PTP) newest holiday production of “Tiny Tim’s Christmas Carol” provides both of those experiences.

…I felt like a kid all over again, sitting by a fire on Christmas Eve with a cup of hot cocoa…

Charles Dickens’ “A Christmas Carol” is the quintessential and most iconic of Christmas stories. Originally written in 1843, it is a tale about a miserable and miserly old man named Ebenezer Scrooge who, through a series of ghostly visitations on Christmas Eve, comes to realize how much he needs to change his cruel ways. PTP’s production brings in the fun, bright-eyed perspective of Tiny Tim as the narrator in this iteration. The company made a commitment to produce a version of this story every three years, while still keeping it fresh each time—and it accomplishes just that.

Throughout this production, I felt like a kid all over again, sitting by a fire on Christmas Eve with a cup of hot cocoa. That intangible feeling typically brought on by the smell of a pine tree or baking cookies was somehow achieved by this show. This is due, in part, by the wondrous set design by Tessa N. Silvestro and costume design by Quentin Nash Sagers. Silvestro’s use of dark wood to create a stable-like feel combined with hanging lights, softly lighting the stage (even during scene changes), felt both soothing and ethereal. A judicious use of a multimedia backdrop also helped to further create the festive environment. Sagers’ costumes brought an authentic feel to the production through period-appropriate clothing. The most impressive costume was the one used for the Ghost of Christmas Future. Its stature helped it feel larger than life, towering above the rest of the characters.

The exuberance of this cast cannot be understated. Each of them emanates absolute joy and a festive spirit. Of particular note were the two young leads, Nyla Brown as Charlotte and Gabriel McKay as Tiny Tim. Brown fills her character with a warm comradery which plays off of McKay’s infectious energy effortlessly. Seeing them together truly felt like watching real childhood friends playing at Christmastime. McKay imbues Tiny Tim with the heart-warming innocence and hope that we’ve all come to know from this famous character.

Becky Norris Kuhn’s high-energy direction kept the show clipping along at a fun pace that is perfect for people of all ages. If you’re looking for a brief, comforting, and high energy segue into the holiday spirit, then this is definitely the show for you and the entire family.

“Tiny Tim’s Christmas Carol” runs through December 19, 2021  at the Port Tobacco Players at 508 Charles St, La Plata, MD 20646. For more information and the purchase tickets, please visit their website here.  PTP is currently requiring face masks for all patrons and proof of either vaccination or a negative PCR test.