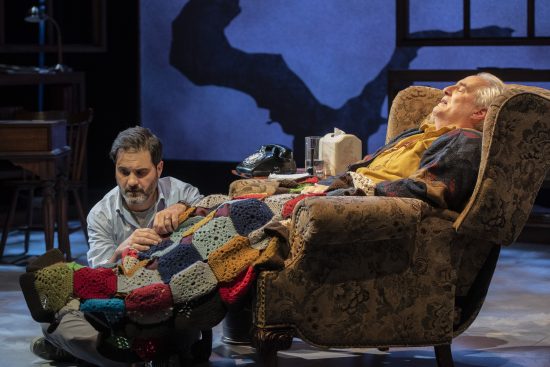 With over 14 million copies sold, Tuesdays with Morrie stands among the most popular and most read books in the world. What makes Mitch Albom’s memoir of the days he shared with his dying former professor Morrie Schwartz so enduringly popular? Perhaps it’s because, as Morrie suggests, when it comes to “that last journey into the great unknown… most people want to know what to pack.” The universality of death, mourning, and searching for a meaning, all wrapped in a story of growth and redemption, help explain why Albom’s book has found such a broad audience. Adapted for the stage, “Tuesdays with Morrie” continues to dampen cheeks and warm hearts in a new production at Theater J, America’s largest Jewish theater.

Mitch Albom (Michael Russotto), a successful sports reporter, is drawn to reconnect with his old sociology professor when he learns on Nightline that Morrie Schwartz (Cody Nickell) has ALS, also called Lou Gehrig’s Disease. What’s initially intended as a one-time visit by Mitch—uncomfortable with Morrie’s “touchy-feely” tendencies and frank mentions of death—grows into recurring meetings, always on Tuesdays, where the pair discuss purpose, regrets, life, and death. With many lines and scenes pulled straight from the book, fans of the source material will be pleased with this adaptation, whose script was written by Jeffrey Hatcher and Mitch Albom.

Nearly two decades old, “Tuesdays with Morrie” sticks to the well-trodden conventions of theater and excels at meeting expectations, without venturing into any experimental or innovative territory. Like the bookon which it’s based, its longevity and wide-spread popularity reflect the uncontroversial nature of its offerings. Avoiding politics, Morrie and Mitch’s conversations offer popular insights like the value of quality time with love ones over professional ladder-climbing, or exalting the joy and meaning of parenthood. One piece of advice—to always forgive others for everything, period—perhaps reflects the blindspots of two well-off and well-educated older white men, who never encountered a transgression they could not surmount. Despite subject matters that could easily become preachy and saccharine, the upbeat pacing and comedic touches pull chuckles and release tension from the audience without breaking the momentum.

While Morrie and Mitch’s meetings span several seasons, the set designed by Debra Kim Sivigny is eternally autumnal. A Japanese maple, whose warm red leaves canopy the stage, backdrops the outlines of Morrie’s living room, with an endless amber sky outside the large arched windows and a stage painted with impressions of leaves like a forest floor. Autumn and sunset, when life and light gradually fade but color still shines brightly, evoke what many hope for their own final years.

Effective lighting design by Andrew R. Cissna clarifies transitions between visits and Mitch’s narration. Meanwhile, music threads through the play, from Mitch’s early ambitions to be a jazz pianist to Morrie’s love for opera. Mitch’s wife, a professional singer, is conjured with nothing but an empty chair and a recording of a woman, a credit to sound designer Matthew M. Nielson.

Mitch’s costuming by Ivania Stack reflects his growing comfort, as he sheds his quarter zip and suit jacket over the months, while Morrie is cozy and colorful in a patterned sweater and maroon pants. Mitch loosens with time, moving from a stiff departing handshake to  gentle and intimate touches—a hand on a knee, a kiss on a forehead. In counterpoint, Morrie stiffens as ASL steals his command of his own body. Morrie, introduced with his love of dancing, fades from a walker to a wheelchair until he’s bed-bound—the unrelenting progress of a degenerative disease. Nickell’s performance pulls in the audience, with audible gasps in the moments where the humiliations of dying press to the forefront and independence slips from his fingers. Directed by Jenna Place, the production seems to capture Morrie’s physical decline more strikingly than in the static pages of Albom’s book, although the slurring speech of ALS patients is underplayed for the sake of the audience’s comprehension.

“Tuesdays with Morrie” lives up to its reputation as a tear-jerking crowd-pleaser. Even the cynical among us may need tissues, not only for the inevitable and somber ending, but for the memories it brings up in those of us who have watched a loved one slowly succumb to disease or regret the moments we wasted with lost friends and family. Superbly acted with impeccable technical design, Theater J’s “Tuesdays with Morrie” is a success that won’t ruffle extended family’s feathers this Thanksgiving and Hanukkah.