Theatre Review: Young Artists of America’s “Joseph and the Amazing Technicolor Dreamcoat” at The Clarice 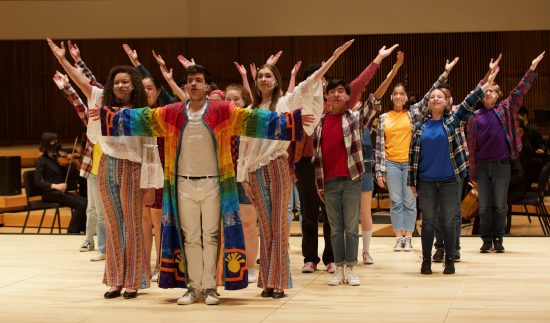 YAACompany and YAAOrchestra in “Joseph and the Amazing Technicolor Dreamcoat.” Photo courtesy of the production.

After more than two years without in-person performances, Young Artists of America gathered inside the Clarice Smith Performing Arts Center on November 7, 2021 for its fall mainstage production, “Joseph and the Amazing Technicolor Dreamcoat.” While the ubiquitous masks and face shields onstage were a clear sign of the times, the excitement was palpable from the 140 young actors, singers, and musicians showcased in this one-day-only staged performance.

… the excitement was palpable from the 140 young actors, singers, and musicians showcased in this one-day-only staged performance.

In Andrew Lloyd Webber and Tim Rice’s family-friendly musical retelling of Genesis: 37-48, Joseph’s (Will Coffey) adventure begins when his father gifts him a splendid colorful coat. This act of favoritism fuels violent jealousy in his eleven brothers, who fake his death and sell him into slavery in Egypt. In a split from typical stagings, two narrators (Avery Fahey and Madi Heinemann) guide us through the story in identical bohemian costuming. Fahey and Heinemann fluidly share the role and both have such lovely voices, you’d almost wish for more exposition.

Later, while Joseph’s talents have landed him at Pharaoh’s (Ian Rubin) right hand, successfully guiding Egypt through famine-time rationing, his traitorous brothers are starving. Bemoaning these dire straits in “Those Canaan Days,” the lead soloist, Sebastian Gervase, entrances as Joseph’s brother, Simeon—a role played with comically melodramatic physicality. However, the climatic reunion of Joseph and his brothers was undercut by the absence of the song, “Benjamin Calypso,” most likely removed for racial sensitivity. By omitting the number, the redemption of the brothers and Joseph’s forgiveness seems to happen at lightning speed.

YAAOrchestra, conducted by Kristofer Sanz, deftly handled the pastiche score. Unfortunately, sound balancing was a consistent problem throughout the performance with mics cutting in too late to capture some actors’ solos. YAA skipped the notoriously grueling “tech week” most theatrical productions (including many high schools) use to straighten out lighting and sound cues. Instead, as I learned during a backstage tour, the company had only one on-site rehearsal, earlier the day of the performance. While this is certainly less taxing on the young performers, it must have been disappointing for performers to rehearse multiple times a week since September only for their solo to be missed by a dead mic.

Most costuming (designed by Judy Jaskolski) was low-key, but Joseph’s titular multicolored coat was fittingly magnificent—and brought all the way from Utah for this production. Direction and choreography by Dana Keane proved enthusiastically high-energy, especially in the upbeat ensemble numbers “One More Angel in Heaven” and “Go, Go, Go Joseph.” The stage, which has been temporarily extended to allow the University of Maryland’s orchestra to rehearse with social distancing, gave the company space for a fully staged and choreographed show. In normal years, this would have been performed in concert, according to Gabriela Schulman, YAA’s Arts Administrator and Production Fellow.

Young Artists of America, founded by brothers Rolando and Kristopher Sanz, is a Maryland nonprofit that supports from 5th graders to post-collegiate in the performing arts and celebrating its 10th anniversary this year. It offers three performance ensembles, all featured in “Joseph”—YAACompany for high school and gap year actors, singers and dancers, YAAOrchestra for high school and gap year instrumentalists, and YAAJunior for 5th-8th grade actors, singers, and dancers. In Spring 2022, YAA will be performing “Aida.”

Appropriate for all ages.

Young Artists of America’s spring performance of “Aida” will be Sunday, April 3, 2022 at 4:00 pm at the Music Center at Strathmore, 5301 Tuckerman Lane, North Bethesda, MD 20852. Information may be found on YAA’s website. Tickets are not yet on sale.