‘A Quick 5’ with Sean Mayes, Musical Director/Orchestrator/Arranger for ‘An Evening with Andre De Shields’ at the BSO 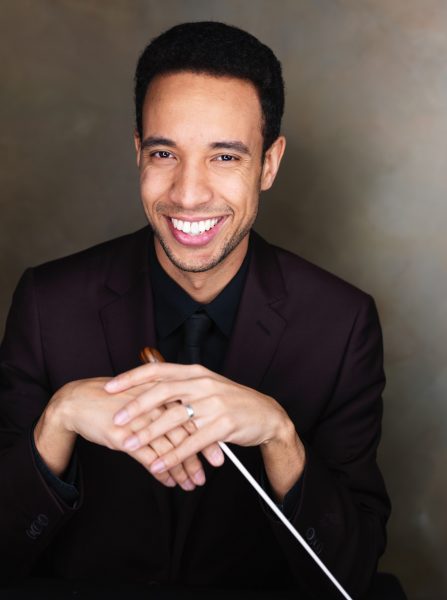 This weekend, native son André De Shields, winner of the 2019 Tony Award® for Best Featured Actor in a Musical for “Hadestown,” returns to his hometown to tell the story of Baltimore and its influence on his journey to personal success. Joining him will be the Baltimore Symphony Orchestra and The Baltimore City College Choir. Sean Mayes is the musical director, orchestrator, and arranger for this concert.

Sean Mayes is a New York-based music director, conductor, orchestrator, arranger, educator, and academic. His musical and theatrical work involves productions throughout North America and Europe. Within the Broadway community in New York, Mr. Mayes is Associate Music Director of the Tony Award-winning musical “Hadestown,” as well as Assistant Conductor of anticipated “MJ.” Other recent work includes time as Musical Supervisor of the Finnish Premiere of “Come From Away,” and as Music Director and Conductor of the Canadian Premiere of “The Color Purple.”

As an author, Sean has published on the role of Black music directors on Broadway (Reframing the Musical, Palgrave Macmillan, 2019), and the retracing of Black practitioners through British musical theatre history (An Inconvenient Black History of British Musical Theatre, Bloomsbury, 2021). Mr Mayes holds degrees in music, education, and music direction from McGill University, Montreal, and the University of Surrey, UK.

Mr. Mayes, you are clearly a man of many parts and accomplished so much, still so early in your career. Tell us more about your background and what is your favorite among the many hats that you wear? What other dreams and goals do you have?

I appreciate your kind words! I started my musical journey knowing I always wanted to use music to teach and to inspire through teaching. I started my career more regularly in the classroom, but have always worked professionally as a music director and professional musician on the parallel of working as an educator. I lean on my background as an educator very heavily, not just in my trade by having the multifaceted musical training that a degree in education afforded me, but in the ethos that education has always had in my life—using music to lead by example, to inspire, to create, and to hope in changing our world for better.

I enjoy the different lanes my musical life allows—as a music director in theatre, in music halls, on stages and elsewhere, as well as an educator, a conductor, an orchestrator, arranger, and as a musical performer. My deepest love has possibly always existed in conducting, but I believe that is because conducting is a musical version of utilizing leadership to inspire others to do their best and create the best they can create. Being a leader as a conductor is what gets me the most juiced.

My dreams and goals musically largely revolve around three large scale ideas—creating art that inspires and helps people realize their full humanity; illuminating the contributions of artists of colour and minoritized identities; and helping identify and mentor the next generation of musicians and artists who have yet to be found, particularly those who have been forgotten by a system that does not always encourage them to be there.

You have worked on many incredible award-winning productions. Tell us about that experience and what are you looking forward to with the upcoming Broadway production of “MJ?”

For me, the most thrilling part of working on high profile or award winning projects is not in the fact that the projects themselves are high profile in the least. It is that most often, those projects attract a level of artists and artistry that demands me to raise my bar and question how I can be the best contributor and collaborator I can be. That is the closest to continuous, unending learning I think we ever come to. Ultimately, I think is the point of what we’re all here to do in life.

I’m thoroughly excited for the world to experience the artistry of “MJ” and experience a catalogue of the most well-known popular music of any artist who has ever arguably walked this earth. Combined with the multi-layers of being a Black artist, what implications that had on his story, and the art that he left to this world, he has undeniably created a lot of joy for many people.

Tell us why it was important for you to write about the role of Black music directors on Broadway and experience of Black artists in the history of British musical theater. Have your own personal experiences differed living and working in Canada, the US, and the UK?

Illuminating the work of Black practitioners in theatre and music histories has been one of the most gratifying experiences I’ve had. I believe largely so because it also provides me with validation that I am not alone on the journey I am currently on, and that there is still work to be done to expose us all to stories and names that we haven’t had the privilege of being aware of. As one of the Associate Conductors of the musical “Hadestown” in New York and the first Black conductor of the show, I consider often how the writing I’ve done in recovery through my work is so necessary in revealing to the world that we are still calling out ‘firsts,’ and how that needs to shift.

Certainly, my identity in terms of my intersection with the industry and being an artist of colour between the US, Canada and the UK has moved and moulded me greatly depending on where I’ve been. What I will say is that the most hopeful thing is that as artists of any sort, we are confident in our commitment to affirmative change, and of showing love and care for one another. And as a result, no matter where I’ve gone, regardless of how much work needs to be done in expanding our circles, I feel that we are generally open and willing to investigate how we can continue to push that ever-heavy boulder up the hill—this gives me the most hope.

“An Evening with Andre De Shields” is a special concert and homecoming for Baltimore’s own André De Shields. While working with Mr. De Shields on “Hadestown,” you seem to have formed a great musical partnership and friendship—and have done previous concerts together. How did this particular concert come about and how were the song choices made, integrating Baltimore as a character?

André was invited to do this concert in Baltimore after he received the key to the city in 2019, an honour in response to his win for the Tony Award that same year. My artistic and personal relationship of collaboration with André is one of the dearest I have in my life and career. It is André’s beautiful artistic allegiance and spirit that the world has come to know so well and serve as an inspiration to me to create a beautiful programme that we know will move our audience.

The song choices were made with the idea of advancing an autobiographical plot of sorts, driven by musical ideas that represent André’s beautifully long life and career. Many of the songs in the program he has written himself for audiences over the years, and those are songs that we’ve fleshed out orchestrally to be able to share with our company at the Meyerhoff. Additionally, the notion of the entire evening was to affirm to all that André is truly a native son of Baltimore, and that in being welcomed back—we would musically show that Baltimore is indeed proud to call André its own. With a line up of pretty killer grooves and heart-warmers, I think it gets done with utmost grace and compassion!

How has the experience been working with Mr. De Shields, the BSO, and the Baltimore City College Choir on this concert?

Truly nothing short of incredible. It’s a true honour to see how beloved André is to his home. In observing him reflect upon his time and roots in the city, we have seen beautiful collaborations with the local artists we have brought on board for the concert here. My most warming and memorable moment, hands down, has been working with the Baltimore City College Choir. Seeing this group of remarkably talented, dedicated, and tenacious students is the inspiration all of us truly need. Our future rests in their hands, and with this group, I am not worried about it one bit. We’ve got good things ahead of us with them at the wheel, and their artistry and work in what we’ve created is so special. I can’t wait for the community to see it with local pride!

“An Evening with Andre De Shields” will be performed on December 3 and 4, 2021 at 8 pm and December 5, 2021 at 3 pm at the Joseph Meyerhoff Symphony Hall, 1212 Cathedral Street, Baltimore, MD 21201. Performers include Andy Einhorn, conductor; André De Shields, vocalist; Sean Mayes, musical director, orchestrator, and arranger; and The Baltimore City College Choir—Marcus D. Smith, Choral Director. For tickets and more information, call the box office at 410.783.8000 or go to this link.

This event can also be seen as part of the BSO’s OffStage Digital Concerts. “OffStage: An Evening with André De Shields” premieres Friday, December 3, 2021 at 8 pm. Concert live streams are available starting at their premiere date and time, with recordings of those live streams available on the next business day for up to two weeks after their premiere date. Foe more information, click here.