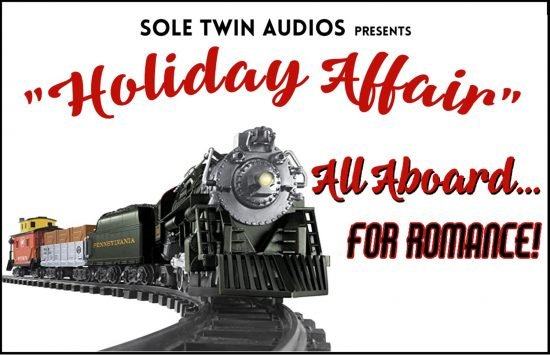 “Miracle on 34th Street,” “It’s a Wonderful Life,” and several versions of “A Christmas Carol” are some of the most popular Christmas films. For its Christmas audio offering based on a classic film, Sole Twin Audios chooses to take a different track (trains are important here) by adapting a less familiar film, “Holiday Affair” (1949). This choice (based on a 1950 audio performance for radio) renders this Christmas-themed production both familiar yet also fresh. There are the traditional Christmas themes of second chances, but presented in a new way, and the show is as relevant to our own time as it was when the movie was released in 1949.

The story opens with Mrs. Connie Ennis purchasing an expensive toy train set, supposedly as a Christmas gift for her son Timmy. Her job is a comparison shopper, spying for a competing department store—a fact recognized by the clever salesman Steve Mason. He chooses not to report Connie after he learns that she is a war widow and a single parent, which results in his losing his job. Connie and Steve then become friendly, causing a dilemma for Connie—should she pursue a relationship with kind-but-edgy Steve, or continue her relationship with her safe and solid, longtime boyfriend, Carl?

“Holiday Affair” did not fare well at the cinema when it was released. This may be owing in part to the choice of stars. Robert Mitchum, who played Steve, was known at the time for film noir films and other tough guys roles (an arrest for marijuana possession a year earlier did not help and this film may have been a way to redeem his image) and co-star Janet Leigh was a relative newcomer—(she would later star in such classic and dark films such as Orson Welles’ “Touch of Evil” and Alfred Hitchcock’s “Psycho.”) Central to the plot is Connie’s deceased, fighter-pilot husband and how best to remember him. This may have alienated 1949 audiences still coming to terms with the lives lost in World War II, which had ended only four years prior.

The serious elements remain in the Sole Twin Audios version, but audiences today may find the mix of comedy and frank treatment of love, loss, and redemption more appealing. Part of this is the Sole Twin Audios production itself, which handles the transitions between the lighter and darker sides of the story much more adroitly than the sometimes-awkward handling in the original film. The talented voice actors Gina Moravec as Connie and John Farrington as Steve are notable for bringing the appropriate attitudes to their parts. Mr. Farrington is especially effective as Steve, who varies between light-hearted and sardonic moments in various situations. Dorothy Farrington makes for a believable Timmy Ennis; Karl Werner comes in for high praise as an amiable Carl Davis; and Jack West has a tour-de-force role in the production as the store clerk, the doorman, the Lieutenant, Mr. Crowley (the department store owner), and even the train conductor. Crisp stereo editing and good but unobtrusive sound effects also bring the production up to date for the audiophile listener of today.

A second reason is that the show does not hinge on magical or supernatural intervention, common to many Christmas classics, but rather on how the central characters’ individual choices contribute to their own happiness—a bit like another sweet-and-tart comedy classic, “When Harry Met Sally.” As Rachel Pulliam, the audio show’s producer-director, tells Maryland Theatre Guide: “I chose ‘Holiday Affair’ over the standard holiday classics because I wanted to give my listeners an opportunity to hear this sweet, slice-of-life Christmas story about a single mother who learns some valuable lessons in matters of the heart.”

Also contributing to the success of the current production is the sound mix. Instead of the intense Hollywood soundtrack with dramatic strings of the 1949 movie, the Sole Twin Audios version uses music composed by Ross Bernhardt which is softer, brighter, and sometimes jazz-themed, and further lightened by occasional music box sounds, bells, and clock chimes we associate with Christmas. This new approach is echoed in the audio show’s vintage-style cover art designed by Pete Lutz featuring a train, firmly placing the story on more of a holiday track.  “All aboard…for romance!” it proclaims, adroitly replacing the uninviting, original 1949 film noir-inspired movie poster.

This production is just the thing for holiday listening, especially on a long road trip—or appropriately, a train trip—to a holiday destination. It can also be shared among friends and family during this festive season. The production runs 55 minutes and can be heard as your gratis Christmas present here.