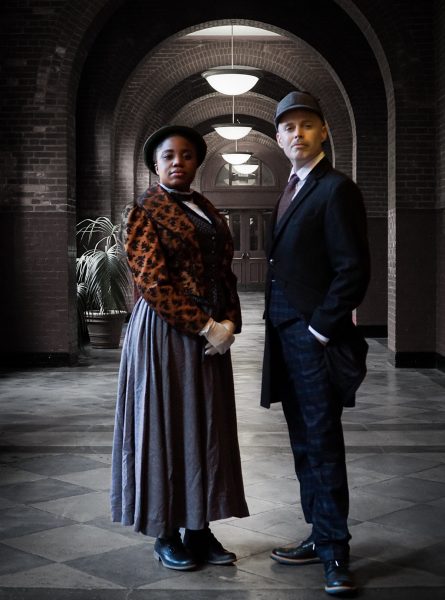 Debora Crabbe as Loveday Brooke and Robert Pike as Ebenezer Dyer in “Murder at Troyte’s Hill.”  Photo courtesy of We Happy Few.

With the holiday season ringing in, two Victorian mysteries by We Happy Few might be just the thing! You can spend New Year’s, Christmas, or Boxing Day (since this is a British subject) solving mysteries with two master Victorian sleuths—Sherlock Holmes and Loveday Brooke. This production is a novel way to spend time with friends, as the audio dramas make available evidence packets that allow groups of listeners to pause the mystery and then examine and discuss the evidence.

First is “Sherlock Holmes and the Adventures of the Norwood Builder,” crisply directed by Mauricio Pita in a spirited adaptation by Robert Pike from the classic Sherlock Holmes short story. The great detective (well-portrayed for a second We Happy Few Holmes adaptation by Jon Reynolds) receives a distressed solicitor who has been framed for murder by his supposed benefactor. A former lover of John’s mother, Jonas Oldacre, has written his will in favor of the solicitor, John Hector McFarlane, stating that his inheritance will go to McFarlane and that this subject will be further discussed in Oldacre’s house later that evening. After their meeting, however, a fire erupts, and Oldacre appears to have been murdered. With McFarlane’s walking stick left behind at the scene, the young solicitor is wanted by the police as a murder suspect and seeks Sherlock Holmes’ assistance to prove his innocence. An unusually astute Dr. Watson (Dylan J. Fleming) has a few ideas of his own about the murder as well.

It is an exciting plot backdrop, to be sure. Yet “The Norwood Builder” is not considered one of the best Sherlock Holmes stories even, as mathematician and Sherlock Holmes lecturer S. Brent Morris points out, by Sir Arthur Conan Doyle himself.

Why, then, was this story chosen for We Happy Few’s second audio Holmes outing? Kerry McGee, Artistic Director of We Happy Few, explains: “The big factor in choosing Norwood Builder is that it lent itself really well to physical clues. The mystery had tangible evidence that could be examined.” This is an important factor for the Capitol Hill-based theatrical company, which mails clues to the mystery to purchasers of its audio plays. These include a faux newspaper from the Victorian Age with the “latest” developments on fingerprinting suspects, replicas of fingerprint cards, a thumb print in wax, a hastily written will, a newspaper report of Jonas’ death (read by Watson in the audio play), blueprints of the house, and a photo of the walking stick left by Mr. McFarlane—all this to make the play a tactile experience for the listener. And, oh, yes—they send a bag of tea. How very English! Similar to read-along books from our childhood, each time chimes are heard in the recording, the listener is supposed to pause the recording and open up an envelope containing new evidence.

In many respects, the production is very loyal to the original story, yet We Happy Few does take a few liberties. In this version, Dr. Watson is telling the story to Holmes’ landlady, Mrs. Hudson (Debora Crabbe), with Holmes’ whereabouts unknown and shrouded in mystery—a narrative technique not part of the original story. In addition, Inspector Lestrade, the detective from Scotland Yard in the Sherlock Holmes stories, is presented as a female character voiced by Suzanne Martin. This female voice, in addition to providing a new layer to the tale, also makes it easier for the listener to discern which voice belongs to which character, especially in scenes with multiple voices.

Yet there is a second mystery available for audio drama fans to solve. Separate from “The Adventure of the Norwood Builder” is We Happy Few’s “Loveday Brooke in the Murder at Troyte’s Hill.” Miss Brooke, portrayed excellently by Debora Crabbe for a second time after last year’s We Happy Few adaptation of “Drawn Daggers,” is a female private detective, also in Victorian England. In this tale, adapted and directed wonderfully by Kerry McGee from the short story by Catherine Louisa Pirkis, Loveday’s employer, Ebenezer Dyer (actor Robert Pike in fine form), asks her to travel to an estate of some distance to investigate a murder. A young, dissipated scion of the family is suspected of the crime but unavailable for questioning as it is claimed he has typhoid. This makes the mystery curiously relevant for today, with our focus on contagions and pandemics. In order to solve the case, Miss Brooke poses as an assistant to one Mr. Craven, an eccentric scholar of comparative philology. While investigating, she suddenly realizes her own life might be in danger.

Like the Sherlock Holmes “Adventure of the Norwood Builder,” for “Murder at Troyte’s Hill,” the listener may order clues sent via mail to enhance the experience. These include a notepad sporting the Lynch Court Detective Company moniker, maps of Troyte’s Hill, an illustration of the crime scene, and a sample of the complexly-flavored “Lynch Court Tea Blend.” We enjoyed The London Lady’s Pictorial faux newspaper with its alliterative articles entitled “Pretty Puffs Past Prime Perhaps?” and “Wheeled Women Wear Wonders.” Then there is also a transcript of an interview between Sergeant Jackson (investigator) and the children who come across the body. This is merely referred to in the audio, but is typed out like an extra scene from the play.

In addition, the listener/reader will come across a cleverly coded message referring to characters in Shakespeare’s play, “Twelfth Night.” This Shakespeare-themed code device is absent from the original story but is a nice touch, especially given that the troupe’s name “We Happy Few” is borrowed from Shakespeare’s“Henry V.”

We Happy Few has now produced more than one episode each of Loveday Brooke, Sherlock Holmes, and its Edgar Allan Poe series, “A Midnight Dreary.” While all are excellent, we hope especially Loveday Brooke will become a regular series (perhaps similar to “Miss Fisher’s Murder Mysteries”). There are many versions of Sherlock Holmes and Edgar Allan Poe stories on film and in the radio-play format, but this is not the case with Loveday Brooke, who is not as well-remembered today. A series would be a very solid contribution to popularizing a once-famous Victorian crime fighter.

If you are interested in cracking cases with Sherlock Holmes and Loveday Brooke, this listening/tactile experience with fun evidence packets is a perfect adventure and also makes an excellent holiday gift for the Victorian mystery fan in your life! More can be found on the website.