Concert Review: ‘An Evening with André De Shields’ with the BSO at the Joseph Meyerhoff Symphony Hall 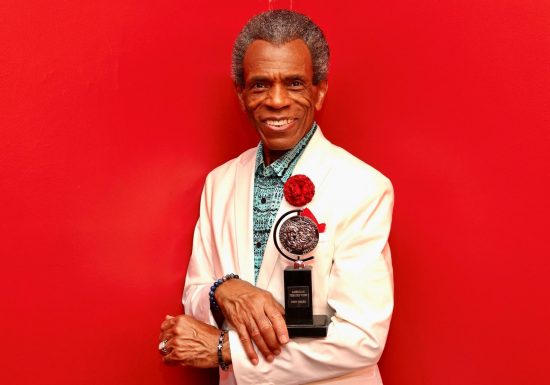 Way back last spring when I found out that André De Shields was going to perform with the Baltimore Symphony Orchestra, my little heart starting going pitty pat. There are only a handful of Broadway stars that I actually want to be, and Mr. De Shields is way up on my list. When the night of his performance in Baltimore finally arrived, I was beside myself. Would he deliver on the expectations I had seeing him perform live for more than 40 years? For the most part, he certainly did. While it was not a totally flawless night, the few bits that failed to dazzle were so overwhelmingly outweighed by the amount of talent and artistry of his performance that they aren’t even worth mentioning. This hour-and-a-half-long love fest, set to music, was delicious.

André Robin De Shields was born in Baltimore some 75 years ago. After finishing high school and getting his BA and MA, his career took off in earnest in productions of “Hair,” “The Me Nobody Knows,” a stint as Bette Midler’s choreographer and various other on and Off-Broadway productions before originating the career changing role of Andre in “Ain’t Misbehavin’.” He garnered a handful of awards and establishing himself as one of the most celebrated triple threats on Broadway. He next wowed the masses by creating the eponymous role in “The Wiz.” Numerous television and international performances followed over the next 50+ years, leading up to the 2019 Tony Award for Best Featured Actor in a Musical for his role in ”Hadestown.”

Last weekend’s concert began with a stirring orchestral selection written by another local icon, Eubie Blake, with a uniquely B’more vibe. It was a great way to get the crowd going. Without any further delay or fanfare, Mr. De Shields took the stage and owned it for the rest of the evening. His trio of backup singers gave him fine support and added a level of polish to each of the numbers in which they were included.

This hour-and-a-half-long love fest, set to music, was delicious.

This was an unapologetic love letter to three topics—his mother, his father, and the city of Baltimore. When he sang his first number, “Let The Good Times Roll,” he fulfilled that promise in song after song. Ford Dabney and Cecil Mack’s “Shine” followed. So it went for the rest of the first hour. His strong vocals; his down home sermonizing on the strength he received from his mother’s support; and his ability to command the stage and mesmerize the audience with that thousand watt smile ended the first half with a soulful rendition of “Believe” from his hit Broadway show “The Wiz,” with back up by the Baltimore City College Choir that had the audience cheering.

But Mr. De Shields was not anywhere near done. His vocal prowess belies his age and seemed even stronger in the second half. While the first part of his show paid homage to his youth in Baltimore and his mother, his attention now turned to his relationship with his father. His loving and tearful rendition of Luther Vandross’ “‘Dance With My Father” brought many a tear to the audience members and I’m not ashamed to say my heart strings were certainly tugged as well.

The evening ended with a strong interpretation of the popular Ray Charles’ song, “What A Wonderful World.” De Shields’ ability to paint word pictures with his voice; to strut across the stage like someone half his age; and the sheer artistry of storytelling and sharing the emotions that shaped him into the theatrical icon he has become (are you listening, Kennedy Center Awards?) were evident in every note. The outstanding Baltimore Symphony Orchestra, under the baton of the inimitable Andy Eichorn (who is as much fun to watch as it is to listen to this world class orchestra) in the magnificent Meyerhoff concert hall makes for a predictably fantastic evening. With Mr. André de Shields on board, the performance was everything the audience could want. Except for one thing—more of it. What a wonderful way to kick off the holidays in Baltimore. Best of the season to us all!