Concert Review: ‘The Christmas Revels: An American Celebration of the Winter Solstice’ presented by The Washington Revels 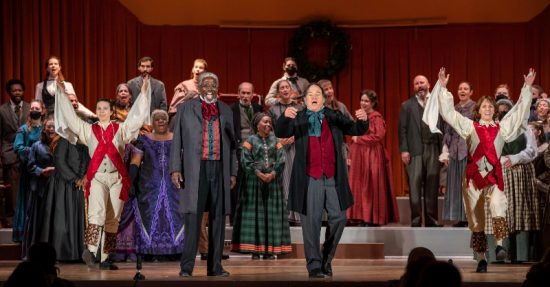 “The Christmas Revels: An American Celebration of the Winter Solstice.” Photo by Alain L. Gutiérrez.

The Revels are Coming! The Revels are Coming (Back!) The much-revered Revelers are here again, thankfully in person this year, after that nasty bug that will remain nameless kept their winsome and unique performance virtual last year. The theme this year is “An American Celebration of the Winter Solstice.”

A breath of fresh air in the harried Christmas season, the Washington Revels is a national phenomenon and annually draws from many seasonal storylines to bring a fresh Christmas experience (with an added seasonal winter solstice angle) to its ardent fans. Here in the DMV, it has been operating for 39 years and now continues its wonderfully traditional show—as much needed around here as Santa needs his Rudolph!

History buffs, lovers of traditional folk music and dance, and families will love the variety and passion in the performances of ‘The Christmas Revels.’

This year, the Washington Revels are staging their Christmas program in the iconic Spanish Ballroom at Glen Echo Park in Maryland. A great venue in itself, it allows for open seating and that ‘great hall’ feel, as if the whole town has come out to give thanks for the season. Keeping the location appropriately local, we find ourselves in the quite large parlor of African American Mississippi Senator Hiram Rhodes Revels (the gregarious and bombastic Gregory McGruder) where we meet his wife Phoebe (the gracious Andrea Jones Blackford), Senator Sumner and his wife (Greg and Susan Lewis) and a litany of celebrities of that era, especially notable abolitionists and freedom fighters. The year is post-war 1870 and the cast exudes a palpable feeling of thankfulness and even relief. Sound familiar?

We watch a living history class as Harriet Tubman, Ralph Waldo Emerson, and others are introduced to the guests, including the beloved Clara Barton, whose abode is a half mile away—all to much fanfare as was the tradition of the ‘guest announcement.’

As many well know, part of the charm of the show is the audience involvement, and with carol sheets in hand, we are given our first chance to unleash our vocals in the well-received “How Do You Do, Everybody?”

The first half continues with more merriment in the form of the PT Barnum impresario, Jenny Lind, performing an aria, “The Swedish Nightingale” as well as period dances and carols. The subplot of freed slaves acclimating into society is presented with honesty and is enhanced by Negro spirituals “Come and Go to That Land” and “Jehovah, Alleluiah.”

This injection of spirituals was particularly effective during the end of the first act, where audience members joined the procession out of the Ballroom during the traditional “Lord of the Dance” prior to intermission.

The second half offers us several more energetic numbers in the African American singing tradition. The acoustics of the ballroom allowing a natural surround sound effect or the players, especially in the slow, moving, and even haunting rendition of “We Are.”

Poignant moments are created onstage by Revels Jubilee Voices member Kadija Ash, portraying traveler Mama Rina, a character based on the people and history of the Georgia Sea Islands. She her remembrances reflect the challenges of freed slaves, keeping the old ways and embracing the new ones.

While taking in the fine performances, one needs to call out the sublime exactness of the costuming. It was a herculean effort and Costume Designer Rachael Feola and Wardrobe Supervisor Emma Bresnan are underpaid! Period dresses called out seasonal gaiety for women and formal stiffness for men, and an accurate lack of red with green the prevailing color for the season. Subdued tones also helped the lighting when focused on featured performers.

One of the highlights was the rousing rendition of “Children, Go Where I Send Thee” with singer Bernie Alston rocking the rafters. Sort of a upbeat “12 Days of Christmas,” it brought the house down.

Even Santa showed up, all in red, which may have been anachronistic, but what is Christmas without him?

Producer Colin K. Bills has helped coordinate a fast moving show in fine fashion and handled the circumstances of the season well. Granted the support from the Revels organization is considerable, but being head traffic cop for this is daunting.

Stage Director Roberta Gasbarre has created a seasonal pastiche drawing on many traditions and Music Director Elizabeth Anne Fulford has let the period pieces speak for themselves, never overpowering the singing, as it was in the 1870s.

There is so much I could point out in this show and I still would not give justice to it. Yet, I especially enjoyed the wonder of the youth, bringing sincere happiness as only they can.

Not only do The Washington Revels provide perspective into the history of each show, but they also present a shared experience in which people they can celebrate the season. History buffs, lovers of traditional folk music and dance, and families will love the variety and passion in the performances of The Christmas Revels.

Winding down the show, Andrea Jones Blackford echoes what could be the Revels anthem, a poem by Susan Cooper called “The Shortest Day:”

The shortest day came, and the year died.

Everywhere down the centuries of the snow-white world.

Came people singing and dancing, to drive the dark away.

They lighted candles in the winter trees

They hung their homes with evergreen.

To keep the year alive.

As promise wakens in the sleeping land.

They carol, feast, give thanks,

And dearly love their friends, and hope for peace.

And so do we, here, now, this year and every year.