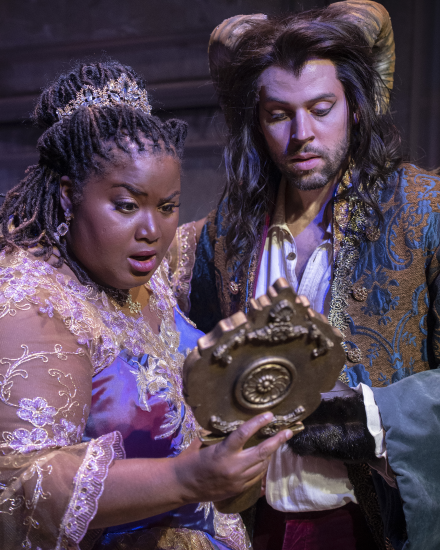 Olney, MD — December 29, 2021 — Olney Theatre Center informed patrons on Monday that multiple breakthrough cases of COVID-19 had forced the cancellation of the remaining performances of Disney’s Beauty and the Beast, which had been mostly sold-out through January 2. The enormously successful run had garnered national and international attention due to pieces about lead performers Jade Jones and Evan Ruggiero in People, MSNBC, and The Washington Post. In all, the final 12 performances of the run were lost due to successive COVID-19 infections among the cast. The announcement came just a day after Olney’s companion production of Hedwig and the Angry Inch resumed performances after missing more than a week due to its own COVID-19 cases. In all instances, those testing positive were either asymptomatic or experienced only mild symptoms.

“Though this news saddens all of us, there’s much we must be thankful for,” said Artistic Director Jason Loewith. “First and foremost, those in our company and on our staff who have contracted the virus via a breakthrough infection experienced mild symptoms  and expect a swift recovery. Second, and almost as important:  in the 48 performances we managed, our production made headlines across the country and inspired thousands across the globe. As one patron wrote recently,

“As the mother of three daughters (11, 11, and 9), I’m grateful for productions that embrace beauty and love in many forms. Those performances play a part in instilling values – shaping who our children become and how they see themselves. Middle school is rough, and I welcome any messaging that says, ‘You are unique, and that’s what makes you beautiful.’ We need to see more of that in the world. Bravo to the cast, to the orchestra, and to the visionaries who saw fit to showcase true beauty.”

“Nonetheless,” he continued, “the physical, emotional and financial cost of producing theater through this crisis has been unlike anything I’ve experienced in my three decades as a producer. While I can quantify the dollars – over $500,000 so far between lost revenue from canceled performances and increased expenses for testing and COVID prevention – I can’t quantify the strain this crisis has put on our artists, our crew and our staff members. Most of us only just returned to work after 18 months of unemployment, and the spectre of another period of job loss weighs heavily on our industry’s workers. If you have a freelance artist, an understudy or swing, a theater staffer, a technician, or a box office or front of house staffer in your life, please show them some much-needed love and support.”

Olney Theatre Center is using funds from its federal Shuttered Venues Operator Grant (SVOG) to pay out the contracts of all those involved in the production. “The SVOG and other relief funds have been an important bridge to reopening our Theatre following the long shutdown and loss of work, and we’re really grateful to have been beneficiaries of that support. Disney’s Beauty and the Beast, like all shows in the holiday musical slot, are expected to earn revenue that pays for the riskier work in the rest of the season. With so much lost revenue due to breakthrough cases and other Covid challenges, we’re concerned about what lies ahead,” said Managing Director Debbie Ellinghaus. Rehearsals for A.D. 16, a world premiere musical with music and lyrics by Cinco Paul, book by Bekah Brunstetter, and directed by Stephen Brackett are scheduled to begin on January 4.

The omicron-related performance cancellations at Olney Theatre Center join the ranks of other recent cancellations throughout the region, including those at the Kennedy Center, Arena Stage, and Signature Theatre.

Olney Theatre Center for the Arts produces and curates theatrical performance for the diverse audiences in our community, and educates, learns from, supports and inspires a more inclusive generation of theater-makers.

We strive to become an arts and culture powerhouse, redefining the American regional theater movement by cultivating and sharing the creativity of our community.

Founded in 1938 as a summer playhouse, Olney Theatre Center (OTC) now produces world and American premieres of plays and musicals, and reimaginings of familiar titles year-round; presents the work of leading companies and artists; tours nationally and locally; teaches students of all ages; and mentors a more inclusive generation of theatremakers. For more than 8 decades, OTC has brought impactful theater performance and education to our community, helping to grow the vibrancy and vitality of our home in the Washington, DC region.

Olney Theatre is now the cultural anchor of a rapidly changing region and serves one of the most diverse, best educated, and wealthiest counties in the country. Situated on the unceded land of the Piscataway-Conoy people, the Olney area was once a rural farming community with a unique Quaker heritage. Now the area is occupied by every kind of family that makes up 21st Century America, along with major corporations, shopping districts, civic associations, non profit organizations and a diverse collection of houses of worship. Montgomery County’s 1 million residents play a dynamic role in the Baltimore-Washington corridor, and are a driving force behind the region’s creative economy.