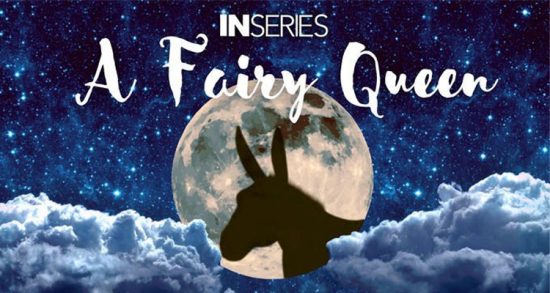 “Momentary as a sound, Swift as a shadow, short as any dream…” This quote by Shakespeare’s character Lysander perfectly describes the INSeries production of Henry Purcell’s “A Fairy Queen,” a radio-style musical play based on Shakespeare’s “A Midsummer Night’s Dream,” performed December 3-5, 2921 at the Baltimore Theatre Project and Washington’s Atlas Performing Arts Center. “Sound, music!” (again quoting Shakespeare) were the watchwords of this production. Almost no props were used except an “ON AIR” sign, applause placards, and microphones to represent the show being located in a radio studio. What made this version different from a “concert opera” version of Purcell’s Baroque 1692 “semi-opera” were sound effects and a highly involved retelling of the Shakespearean comedy, complete with radio narrator.

…this was a delightful presentation with an added feature of Baroque music to enrich a favorite Shakespearean play.

There was another major difference to how “A Midsummer Night’s Dream” and Purcell’s adaptation “Fairy Queen” were presented—Shakespeare’s work had been rearranged to ensure clarity of the storytelling. This production broke down the four different plots into four different nights. First, there were the mechanicals or the rough laborers (Peter Quince, Bottom, and company) who try to put on the play of “Pyramus and Thisbe” from the classic myth found in Ovid’s “Metamorphoses.”  The second night was the conflict between the king and queen of the fairies, Oberon and Titania, and the mischievous spirit Puck’s efforts have Titania fall in love with the first thing she sees. The third night presented the conflict of the two sets of lovers—Hermia and Lysander and Helena and Demetrius.  Finally, the fourth night was a presentation of Pyramus and Thisbe at court. As always, love and confusion are major themes in the play, but with the Purcell settings, “so musical a discord,” to quote Queen Hippolyta (a character ironically dropped in Purcell’s version of the play).

For those with “a reasonable good ear in music,” as Bottom would say, this was a delightful presentation with an added feature of Baroque music to enrich a favorite Shakespearean play. The work was performed by talented singers who took on the roles of characters in “A Midsummer Night’s Dream,” including Marc Callahan as Bottom and Demetrius, Aaran Sheehan as Lysander, Sylvia Leith as Helena, Melissa Wimbish as Hermia, Benjamin Williamson as Oberon, Lucy Page as Titania, and Enrico Lagasca as Puck. The excellent ensemble of instruments to perform the work in Baroque style consisted of piano, harpsichord, organ, two cellos, and violin.

Artistic director, harpsichordist, and organist, Timothy Nelson (who also conceived this unique production), explained in the program notes that “the score of Purcell’s ‘The Fairy Queen,’ with its more famous moments like ‘The Drunken Poet,’ ‘The Plaint’ and ‘If Love’s a Sweet Passion,’ along with more familiar Purcell works […], are mined to string together music running throughout and alongside Shakespeare’s text.” These and other songs were performed beautifully by the brilliant cast of singers, but the program did not list the songs, and thus it was very difficult for a reviewer or audience member to retrace for after-performance reflection. This is especially challenging, as “who sings what” differs somewhat from the original Purcell version of “Fairy Queen.”

One point of interest is that while Shakespeare’s words presented in the production retained their usual beauty and power, the songs themselves were by Purcell’s librettist, not Shakespeare, and are noticeably inferior in terms of text. In “The Plaint,” for instance, the simple words “O Let Me Weep” are repeated again and again, and there is not much more to the song. Yet the art here is not in the lyrics but in how the singer puts the emotion of weeping in variation using melismatic notes, and the performance of this and other songs amounted to a clear success.

As for the radio-style musical play format, this was a clever conceit and an interesting way to perform the production. The humor of Shakespeare’s play was clearly present and even elaborated when a fourth wall was broken as one performer began singing and then attempted unsuccessfully to play the trumpet. A seated “audience member” was called on to sing the trumpet section of this piece, making the production more accessible and engaging. The sound effects also worked well to the amusement of the audience. Yet the humor of the production could have been enhanced perhaps even further in the radio-style format, as radio in the past has been a very effective medium for comedy.

At the end of the day, a Baroque semi-opera rests firmly on its music. “What, wilt thou hear some music, my sweet love?” asks Titania in “A Midsummer Night’s Dream?” For the audience at the Atlas Performing Arts Center, the answer was a resounding “yes!”, with the performance receiving a standing ovation and even a loud cheer from an audience member.

The production of one weekend was short-lived like a midsummer dream, but hopefully Purcell’s “Fairy Queen” will return in some form again soon in the Baltimore and Washington regions to entertain audiences who enjoy the blend of Shakespearean comedy with Baroque music.

Running time: Two hours and 40 minutes with a 15-minute intermission.