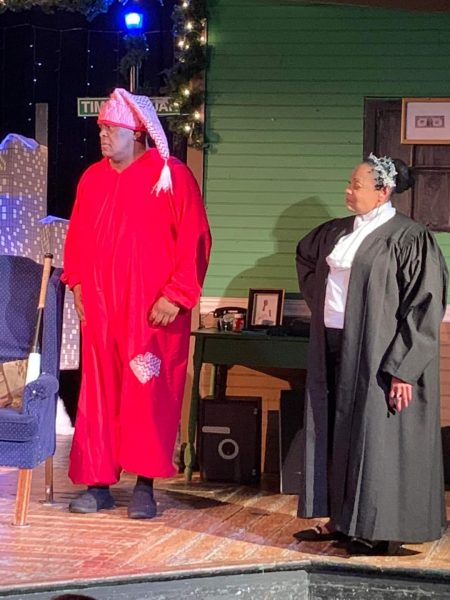 All too frequently, one of Baltimore’s best little theatres flies under the radar of the viewing audiences. This is a shame because Arena Players is now in its 68th year and celebrating the season in fine fashion with a production of a rarely seen musical, “Christmas is Coming Uptown.”

This happy salute to Charles Dickens’ “A Christmas Carol” has been re-worked and updated, now set in (relatively) current day Harlem. The story is basically the same—mean ol’ Scrooge is now a black slum lord with no regard for the neighborhood and least of all his overworked and underpaid assistant, Bob Cratchit. There is the requisite Tiny Tim, the familiar ghosts of Christmases Past, Present, and Future, as well as a new love interest for the original bah humbug guy. There’s a lot of singing and dancing sprinkled like tinsel around the production which puts a cool spin on the well-known tale.

Arena Players is one of the few, non-professional local theatres to have its own brick and mortar building. While they are involved in an ongoing quest to update and upgrade the facility, it is perfectly comfortable and accommodates a fairly large audience without feeling overly crowded, a pleasant change from theatres that jam the seats so close together that one feels like one too many sardines in the can. In this outing, the stage itself is a little too crowded with the overly large cast to avoid the feeling that you’re witnessing the holiday rush for the last subway uptown to Harlem at rush hour.

Director Tamba Giles has done a fine job of putting together a production team that includes Victoria Jackson on costumes, Felicia Chapple on lights, and Byron “Tony” Rogers, Sr. and Ms. Giles’ set design and decorations. Mari Andrea Travis does ambitious work with the choreography, and musical director Bruce Henderson coaxes some fine harmonies from the cast ensemble numbers.

The ensemble could use a tad more rehearsal to avoid looking a bit confused about who goes where when. Given the sheer number of people on stage during the full cast numbers, finding a space to adequately move around and do the choreography moves was a well-met challenge.

All of the supporting cast seems well suited their roles, from the adorable Dana Murphy as Tiny Tim to the full-voiced Anthony Brown as The Ghost of Christmas Future. Aaron Andrews has some fun moments in his boxer’s outfit as the Ghost of Christmas Past, and Gina Lee chews up the scenery as Marley.

Maytwon Ross-Brown doing double duty as both The Ghost of Christmas Present and as Mary, Scrooge’s love interest, does a credible job and has a lovely voice to boot. Dominic Gladden holds his own as the timid Bob Cratchit and won cheers from the audience when he finally stands up to the tyrannical Scrooge in the final scene.

The entire production hinges on the performance of the man himself, Scrooge, more than aptly handled by Benny Pope. With his Grinch-like smile and oozing meanness, he is funny, ingratiatingly irritating, and totally engaging in this part.

Too many theatres in our fair city don’t get the recognition they deserve and for theatres with a minority constituency, it can be a monumental struggle to just keep the doors open. Let’s try a little harder to be supportive, especially with venerable institutions like Arena Players. Everyone should head on over to catch “Christmas Is Coming Uptown” to make sure we keep this local gem alive for this and many seasons to come. Happy Holidays!