Theatre Review: ‘Once Upon A One More Time’ at the Shakespeare Theatre Company 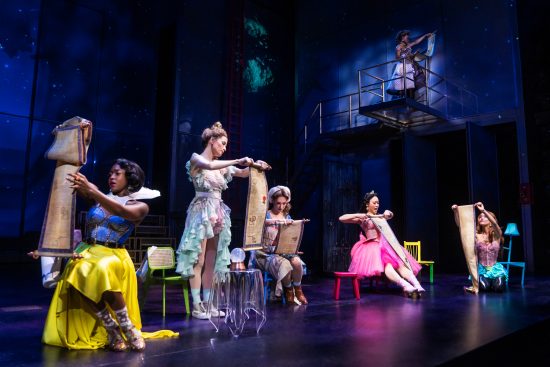 Aisha Jackson as Snow White, Briga Heelan as Cinderella, Morgan Weed as Princess and the Pea, Ashley Chiu as Sleeping Beauty, Lauren Zakrin as Little Mermaid, and Wonu Ogunfowora as Rapunzel (above) in “Once Upon A One More Time.” Photo by Matthew Murphy.

Jukebox musicals have become a staple of the theater world over the past couple of decades with mixed results. The immensely successful “Mama Mia!” started the ball rolling with the music of ABBA and the trend has exploded over the past few years. (One can argue whether or not the shows that are biographical, such as “Jersey Boys,” “Tina,” and “The Cher Show” are in a category of their own.) The latest foray into this genre is the brand new production of “Once Upon A One More Time,” utilizing the catalog of pop icon, Britney Spears. The show officially opens Shakespeare Company’s 36th season and has Broadway in its sights. This musical could not be timelier in light of the recent emancipation of Britney Spears from her arguably overly restrictive and lengthy conservatorship—and the continuing attacks on women’s rights, especially control over their own bodies.

…the show is visually rich, has an important message delivered by an extremely talented cast—and is just plain fun…crowd-pleaser, with standing ovations and sold-out performances…

The musical is akin to “Head Over Heels,” which uses a 16th century romance and the music of the 80s pop group the Go-Go’s and also “Six,” giving new empowerment to historical, female figures. In this instance, the plot (book by Jon Hartmere) uses those familiar fairy tales that we—especially girls—read growing up. They have been further imprinted on our psyches in the animated and live-action Disney versions. The promise is that a Prince Charming will save you from whatever trial or danger in which you find yourself, marry you, and live happily ever after—and, of course, it helps to be beautiful. In fact, the concept of using the princesses was Spears’ idea.

A Little Girl (sisters Adrianna and Mila Wier alternate performances – we met their proud grandmother before the show) is reading from her fairy book. The characters come alive behind her and are presented to us as employees in business-like environment, run with a firm hand by the Narrator (Michael McGrath). This is their job, like actors in a play, waiting backstage to be called. But what are their lives like when they are not performing?

All the fairy tale princesses and other female characters are represented. They hang out in a “scroll” club and sometimes imbibe on too much wine when not on duty. They include Snow White (Aisha Jackson), Sleeping Beauty (Ashley Chiu), Belle (Belinda Allyn), Rapunzel, via a magic snow globe (Wonu Ogunfowora), the Princess and the Pea (Morgan Weed), the Little Mermaid (Lauren Zakrin), Gretel (Selene Haro), Little Red Riding Hood (Jennifer Florentino), and Goldilocks (Amy Hillner Larsen). Finally, there is Cinderella or Cin (a wonderful performance by Briga Heelan), the most popular princess, who is very unhappy and questions if this is all there is.

Through a magical door, the Notorious O.F.G. (Original Fairy Godmother, hilariously played in a star turn by Brooke Dillman) throws out a new and mysterious item—a book, “The Feminine Mystique” by Betty Friedan. O.F.G. was banished by the Narrator, escaped “the story’s end” (a sort of limbo) and landed in Flatbush, NY. When Cin shares the book with her fellow princesses, some are hesitant. Eventually an awakening occurs and they go on strike.

Prince Charming (Justin Guarini) is preening, egotistical and, as it turns out, the prince to several of the ladies—basically cheating on them. Guarini often steals the show and is perfection as the self-absorbed prince surrounded by his fellow prince entourage in the fitting “Oops…I Did It Again.” There is a particular moment most women have experienced while having a disagreement with a man. Author Jon Hartmere is spot on when Charming uses those trigger words to describe Cin as “strident,” “shrill,” and “hysterical.” There were acknowledging gasps by women in the audience at every word.

Other scene-stealers include Emily Skinner as Cin’s Stepmother, with MiMi Scardulla as Belinda and Tess Soltau as Betany, her stepsisters. They all possess great comic timing and wonderful voices.

There is a “coming out” love story between Prince Erudite (Ryan Steele) and one of the Seven Dwarfs, Clumsy (Raymond J. Lee) who watches over the princesses—notably the clueless Snow, keeping her from sharing her poison apple pies. Though sweet and funny, this thread seems extraneous in a show focused on female empowerment.

The women ultimately free themselves, now able to write their own stories and have their own voices heard (reference to the Little Mermaid giving up her voice for legs to be with her human prince.) They can create their own “happily ever after.”

The creative team is lead by the director/choreographer team of Keone and Mari Madrid, known for their hip-hop flavored style and who have worked with some of today’s most prominent pop artists. They keep the pace fast and the cast and ensemble are up to the high-energy dance routines that capture the feel of Spears’ music videos. The show is packed with the singer’s songs (i.e. “… Baby One More Time” and “Toxic” combined with less familiar tunes) and, with some minor alterations, they cleverly work well with the plot.

The production is full of beautiful treats for the eye—from the hybrid of classic/Disney/current styles found in the brightly-colored and wonderfully-textured costumes by Loren Elstein to the vast and minimal set by Anna Fleischle (with lighting by Sonoyo Nishikawa) that allows Sven Ortel’s gorgeous video and projections to live and breathe.

The show contains many wonderful elements for a run at the Great White Way but needs a bit more refinement. The Narrator is a bit wooden, not a fully realized role, and it is not clear how he got his power. Though relevant, the large globe that houses the beautiful quill and hangs over everything can be distracting. Sometimes there is so much going on, it’s like the blur of a fast-moving train. That said, the show is visually rich, has an important message delivered by an extremely talented cast—and is just plain fun. This  crowd-pleaser, with standing ovations and sold-out performances, has been extended due to the demand in ticket sales.

“Once Upon A One More Time” runs through January 9, 2022 at The Shakespeare Theatre Company, Sidney Harman Hall, 610 F Street NW, Washington, DC 20004. For more information and tickets, click here here. Masks and proof of vaccination are required. For more information, go to their website.