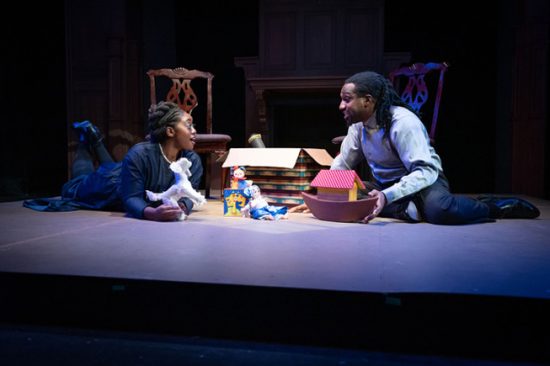 Creative Cauldron’s new Bold Works for Intimate Musical Stages initiative continues with a new work, “The Christmas Angel,” by the stalwart creative team of Matt Connor and Stephen Gregory Smith. It’s a charming, gentle parable about what really matters, not just at the holidays, but always.

…comforting, beautifully sung and choreographed, and brings a sense of home.

The story is a simple one and familiar in its outlines. Angelina lives alone in her family home. Her parents are dead and her only sibling, brother Tom, has been turned away for some time because he has succumbed to the vice of gambling. When he has the funds, he lives in a public house and Angela refuses his letters and any mention of him. She is attended by Horton, the butler/man of all work, who hopes to reconcile the two. He recognizes the deep loneliness under her hard shell. When Angelina retrieves a box of their old toys from the attic and memories ensue. I think we can all guess the ending.

Angelina is played by Kanysha Williams who has a lovely soprano voice, well-suited to both the songs of anger and the one of joy she sings. She plays the character with restraint and you sense her deep well of despair and the defenses she has erected. Ryan Sellers, well-known to audiences at Synetic, Creative Cauldron, Signature, among others, handles the part of Horton deftly and with understated humor. Carl Williams portrays Tom, a man who is caught in the throes of an addiction, yet misses and loves his sister deeply (he also plays Bob Cooper). His rich voice is a pleasure when he sings with Williams and the two would be lovely in a cabaret together. 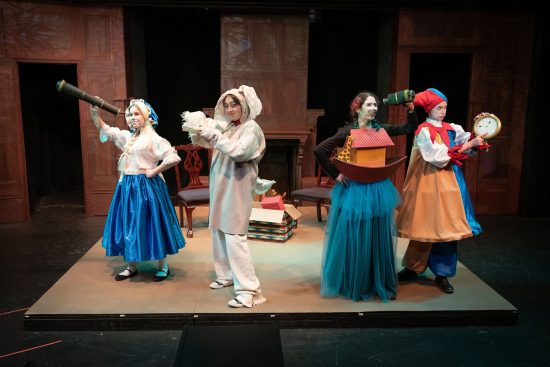 Jane Keifer as Miranda, Sophia Sami as Flanton Dog, Carmen Ortiz as Ark, and Owen Thiebert as Jack in the Box. Photo by William Gallagher.

The ultimate stars of the show are the Toy Ensemble—Owen Thiebert (Jack In the Box), Sophia Sami (Flanton Dog), Carmen Ortiz (Ark), and Jane Keifer (Miranda the doll). They are the toys that Angelina and Tom shared as children, and even though Angelina puts them out in the snow, these little misfit toys find homes and manage to help spread the Christmas spirit. The four young actors bring these toys to life and you find yourself rooting for them to be okay. The next generation of musical theatre performers is earning their wings. Gabriela Simmons-Robles plays the Christmas Angel, who speaks to Angela in her memories and helps her onto a different path.

The cast also includes a rather large ensemble comprised of members of Creative Cauldron’s Musical Theatre Pre-Professional Training track and it is a delight. Horton leaves his employer to fulfill his obligation of leading them in a caroling choir around town which includes bell ringing. The ensemble includes Madeleine Ruffini, Sophie Silva, Courtney Weldon (she also plays a poor girl), Eliana Pizzirusso (who plays a woman in mourning quite convincingly), Elaina Rosenberg (also a poor child), Bevin Mills (poor woman #2), Gabriela Simmons-Robles again (who also plays a poor orphan girl named Mary), Courtney Weldon (also Uncle), and Anjali Virmani (also Aunt). Rosenberg and Virmani also play the poor children #2, and Rosenberg is also Jo. In between playing the other characters whose lives will be touched by the discarded toys that night, they play the caroling choir, and at the end, the whole cast joins in in an uplifting finale. The interludes with Horton and his merry little band of bell ringers provide some nice, wry comic moments.

Scenic and costume designer Margie Jervis deserves major kudos for the delightfully inventive toy costumes, and for the actual toys themselves. They are imaginative and a highlight of the show. Warren Freeman is the music supervisor and Lucia LaNave the music director. James Morrison handles the lighting and projection design. Kudos to the six scenic and costume volunteers (Don Hesse, Judy Ortiz, Lydia Carlisle, Naomi Lipskey, Sandra Wilson, and Geri Hiral) because there are a lot of moving pieces in that intimate space (stage and backstage) and a large cast to get in and out of those quick changes.

“The Christmas Angel” is a show that should delight young audiences, and will be a nice introduction to a professional staging that features so many young actors/singers. It is a gentle, charming show with its share of “awww” moments. If it doesn’t break any new ground, it doesn’t have to. It’s comforting, beautifully sung and choreographed, and brings a sense of home.