Theatre Review: ‘Tootsie’ at the Hippodrome Theatre at the France-Merrick Performing Arts Center 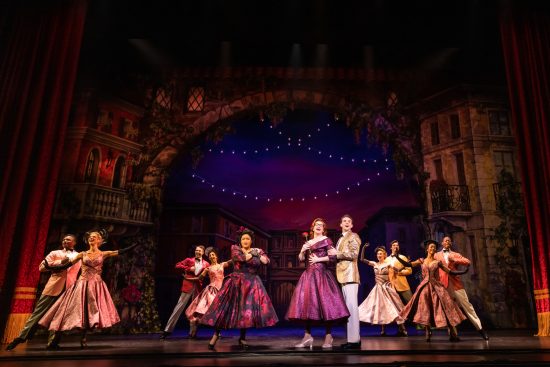 The cast of the National Tour of “TOOTSIE.” Photo by Evan Zimmerman for MurphyMade.

Sidelined by the pandemic, the 1st National Tour of “Tootsie” has finally arrived at Baltimore’s Hippodrome Theatre and runs through December 5, 2021. Based on the 1982 film of the same name, this musical comedy—with music and lyrics by David Yazbeck and a book by Robert Horn—was nominated for numerous awards and won several, including two Tonys in 2019. It tells the story of an intense, struggling actor, Michael Dorsey (Drew Becker), who is hitting 40 with little success. He has a reputation of being very difficult, resulting in a raft of rejections. In desperation, he disguises himself as a woman to audition for a role in a cheesy, upcoming Broadway musical. Very loosely based on “Romeo & Juliet,” it is eventually called “Juliet’s Nurse” thanks to input from “Dorothy” (in the film version, the role was a role in a soap opera).

For a great night of escapist fun and lots of laughs, “Tootsie” delivers.

The musical doesn’t have the same emotional depth and impact as the film did almost 40 years ago because it is not a literal translation of the story and the world has changed so much. There is more acceptance of gender fluidity and the #metoo movement, though we still have far to go. Briefly touched on is the issue of a male actor playing a female role, so the messaging is a little tricky in the current environment. The writers chose to make this more of a love-letter to theater while affectionately skewering its stereotypes. It’s big and splashy and reminds one of an old-fashioned musical with soaring songs and dance numbers, despite the contemporary updates. The satire is probably most exemplified by the director (a very funny Adam du Plessis as the pretentious and more benign, womanizing Ron Carlisle) explaining and acting out the choreography in one number (reminiscent of a similar scene with Robin Williams in “The Birdcage.”)

While the Drew Becker has an incredible range and does a solid job as Michael/Dorothy, it is the supporting characters who really give the show its sparkle. Ashley Alexandra is a joy as Julie/Juliet, Michael’s love interest, giving emotional depth to the role as well possessing a stunning voice (notably in the funky, R&B-style “Gone, Gone, Gone.”) Lukas James Miller is a hoot as Max Van Horn (and Romeo’s brother, Craig, in “Juliet’s nurse), a sweet but dim bulb who recently appeared in a “bachelor” reality TV show. Every excuse is made to show off his bare chest and his crush on the much older Dorothy is endearing. As Sandy, Michael’s insecure ex-girlfriend, Payton Reilly is a scene-stealer, especially in her signature number that reprises throughout the show as she always expects the worst in the fast–paced “What’s Gonna Happen”—think “(Not) Getting Married Today” from the late, great Stephen Sondheim’s “Company.” As Jeff, Jared David Michael Grant is wonderful as the more low-key, slyly funny counterpoint to Michael’s intensity. Kathy Halenda as Rita Marshall, the producer and rich widow who gives Dorothy a chance, and Steve Brustein, as Michael’s agent, give some great comic turns.

Also a great asset is that this road show does not skimp on the production value. The set, designed by Christine Peters for the tour, has beautiful backdrops and set pieces that, in one instance, cleverly go from two structures representing New York skyscrapers to opening up into to a full-stage apartment.

Director Dave Solomon keeps the pace fast and fun. There are so many laugh-out loud moments (even in “Jeff Sums It Up,” full of the “F” word and the accompanying hand gestures). For a great night of escapist fun and lots of laughs, “Tootsie” delivers.

Running time: Two hours and 45 minutes including a 15-minute intermission.