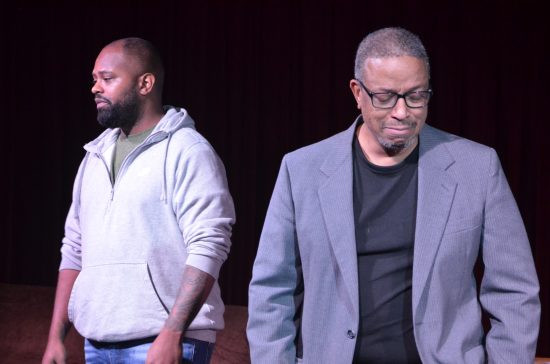 When one thinks of Christmas and the holidays, traditionally joyous thoughts of family get-togethers, presents, lovely dinners, and a festive electricity come to mind. “Traditionally” being the key word. Dr. Seuss was once quoted as saying “Christmas will always be as long as we stand heart to heart and hand in hand.” So, when I went to the show “Variations on Holidays” by Rapid Lemon Productions, I had hoped I would see some of those traditional ideas on display. However, just as the world seems precariously out of whack, the idea of anything traditional remaining intact implores us all to work in unison. “Variations” clearly had something quite different in mind.

…the actors exhibited great talent and I applaud the production team.

This two-act production was split into ten micro-plays. In the first act, two plays stood out for me. “Bud,” written by Crystal Sewell, personifies the current state of affairs for an eighties Hasbro doll for boys called “My Buddy.” Smoot Michaels (Bud) and Colleen Isaiah (Sissy) were outstanding in their portrayals of these forgotten toys. The underhand messaging (since this was probably the point) was nicely delivered with smoother edges than the other numbers in this act. “A Thing for a Thing” written by Deborah Carry Amland had one element that was so absurd, it was too hilarious to resist. Having a disgruntled elephant—with a crass attitude to sweeten the situation further—was brilliant, in a juvenile way, and had me trying my best to not burst out laughing.

Act Two was much darker in subject matter, so whatever idea I had of a warm, fuzzy, and festive holiday resolve came to a crashing halt. “Black Friday” written by Michael A. Grandel was literally heart wrenching. A young father named Andrew (Smoot Michaels) tells his father Martin (Tyrone Chapman) he doesn’t want his children around their grandparents—not even for Christmas. Apparently, the grandmother was too “heavy” for the children to be around. No pleading from Martin made his son change his mind. These actors, as depressing as this story was, were marvelous in projecting their pain. Bravo!

The final play of the evening was “Krampus’ Rules of Order” written by Emma Howard. The whole evening’s cast was out for this one. I thought Ari Juno was fantastic in portraying Krampus. In fact, Ari was impressive the entire night. Some other notables include Kwame Shaka Opare, Colin Riley, and Crystal Sewell. Much credit to director Flynn Harne, as all the numbers were well coordinated. Transitions were flawless, in spite of the challenges of moving ten mini plays. Much credit to stage manager Peri Walker for ensuring nothing went amiss. Andrew Vida unfurled the lighting, which gave the right amount of ambience, and sound designer Max Garner was right on cue.

Overall, “Variations on Holidays” could have used a douse of Christmas holiday cheer. The writers could have jazzed it up a bit (with some exceptions), but the actors exhibited great talent and I applaud the efforts of the production team. I won’t go so far as to say it isn’t for everyone because even I found brazen ingots of humor and hilarity in a few of the pieces.