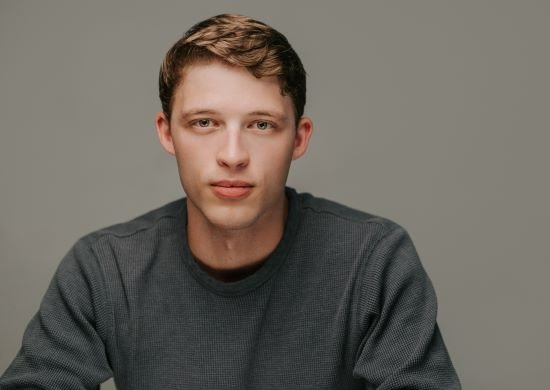 Taylor Bloom as Paul Simon in “The Simon and Garfunkel Story.”

If you grew up in the 1960s, Simon & Garfunkel were part of your life. The duo recorded and performed together until the early 1970s when they went their separate ways, reuniting in Central Park for one more concert in 1981.  Whether your favorite was the haunting “The Sound of Silence,” the upbeat “Mrs. Robinson” or the pensive “I Am a Rock” you will want to catch “The Simon & Garfunkel Story” at Broadway at the National Theatre in Washington, D.C. The show will play two days only January 29-30, 2022 and feature a full live band and will include almost all of the duo’s big hits.

For those who may not remember Simon & Garfunkel like those of my generation, they sold over 100 million albums, received 10 Grammy Awards, and were inducted into the Rock and Roll Hall of Fame in 1990. “Sounds of Silence” received a Grammy Hall of Fame Award. The show follows their story from the beginning of their career until that concert in Central Park.

I had a chance to interview Taylor Bloom who plays Paul Simon in the production. (Ben Cooley is Art Garfunkel.)

Taylor Bloom is an actor and creator based out of New York City. One of five brothers, he was born and raised in the Shenandoah Valley near Middletown, VA. Taylor attended Shenandoah Conservatory where, in addition to sharpening his skills on stage, he caught the bug for acting, film, writing, and directing. “It’s a place that’s felt like home to me from when I first began at age 11.”

After seeing an audition posting for “The Simon & Garfunkel Story,” Taylor thought it would be a fun audition and rare opportunity to “put my guitar skills to work. Usually, I’m just acting and singing.” He owes all of his guitar skills to his older brother, Joe, who taught him not only to play, but also how music is structured and functions. After getting the gig, he spent the next few weeks furiously tearing through Simon & Garfunkel records trying to get more familiar with their music, all the while trying to find his apartment in New York City.

Growing up, Taylor’s mom would always play Cat Stevens, Dan Fogelberg, and James Taylor in the car. “Then as I got older, I listened to Damien Rice and Glen Hansard, and am now a huge fan of John Mayer.” When asked about his earliest memories of Simon & Garfunkel, he remembers the first time he heard the song “America.” “I was in my teens and I had no idea what I was listening to, but I remember thinking ‘whoa, this is amazing!’” His favorite Simon & Garfunkel album is “Sounds of Silence.”

In his spare time, Taylor also enjoys cooking, ukulele, piano, and writes music for his band, Coastline. “I am also co-creator for a podcast called “The Foundry.” His biggest inspiration now is Ben Platt and his four siblings. “This is my first tour so I’m really excited about it,” he says. “I’ve never been west of the east coast. So, I can’t wait to see the country.”

Paul Simon is known as one of the great popular music composers for about 60 years.  Do you also compose music?

I do! I’ve been writing songs since I was about 11 years old, but only in recent years have come to consider myself a songwriter. In 2021, I released two self-produced studio albums using the immense talents of the musicians I have met through “The Simon & Garfunkel Story.” So, if you wanna get an idea for the world class musicianship in our show, go look me up wherever you get your music!

What did you learn about Paul Simon that you did not know before taking the role?

So much! I didn’t realize how young he was when he began writing music (We’re talking being in his late teens/early twenties when writing iconic songs like “The Sound of Silence” and “Kathy’s Song”). I didn’t know anything at all about his process or approach to songwriting, but so much of this was revealed to me in the biography “Paul Simon: The Life” by Robert Hilburn—recommended reading for any and all dedicated Paul Simon fans.

Simon and Garfunkel had their ups and downs. How is your relationship with the actor playing Art Garfunkel?

Fortunately for me, Ben Cooley is a class act. We have been working together going on four years now and over time, we have grown to be great friends. We have tremendous fun on the road together along with our band, and I believe that fun is reflected in our performance during the show. We truly love our jobs and getting to work together.

Do you prefer acting, singing, or playing the guitar and why?

Oh, I love all my children equally. But these days, I have spent so much time playing and producing music, I’m really looking forward to doing some acting in the near future!

Well, I love acting roles that incorporate music—you know, the rock star boyfriend in the TV show, or Guy in “Once.” Something like that would be awesome!