Concert Opera Review: ‘The Drama of Tosca’ on the Opera Philadelphia Channel 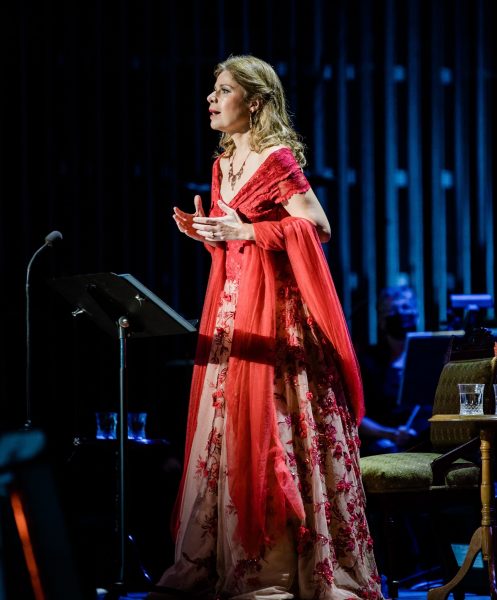 The Opera Philadelphia Channel, created during the Coronavirus pandemic to stream productions for an opera audience deprived of live productions at the Opera House, has produced a highly accessible production of Puccini’s “Tosca.” This is the tragic tale of the opera diva, Floria Tosca, whose fatal flaw of jealousy allows her to place her lover Mario Cavaradossi’s life in danger by making poor choices when questioned by the villain, Baron Scarpia, the detested chief of Rome’s police. This production, which is actually a concert version of the opera, is especially notable for significantly reducing the performance time of this famous grand opera as well as for providing an excellent, reflective narration by Charlotte Blake Alston. In her skillful narration, she is able to guide the listener through “Tosca” and render it accessible to all, as in these lines in which she introduces the characters in a highly personalized manner:

“Floria Tosca, a great actress, loves Mario, a great painter, who paints great paintings in a great church. Tosca happily visits him there. Her love for God enhances her love for her man. She’s a woman with burning passion, like Mary Magdalene, in love with God and even more so in his Son, Jesus. Fire can be quite dangerous, especially if your lover is concealing terrible secrets, much bigger than those hidden in the portrait of Mary Magdalene, his painting.”

This is a highly successful example of how opera can win new fans in a highly engaging performance through the medium of streaming productions.

These secrets, of course, are a reference to Mario’s sympathies with Napoleonic objection to the absolutism which prevails in Rome. As for the opera company itself, a version of “Tosca” is offered without imposing sets or even traditional opera costumes for most of the characters. Instead, the opera is conveyed with narration, dramatic gestures, glorious singing, and orchestral music. The music is reorganized in a different sequence in order to supplement the narration of the thrilling story and put the most dramatic, melodic portions up front. For this reason, the production is well titled “The Drama of Tosca.”

When it comes to the filming of the opera, different camera angles provide a closer look of the orchestra and singers, bringing a more involved, detailed landscape into the production. Because the performance is being shown in an unconventional setting in a virtual format, necessary changes have been made—the introduction of a narrator, as mentioned above, delivering important plot changes between each sung piece, for instance, and the opera delivered in a concert style. Scenery changes, which might have helped convey the plot to those new this opera, are absent. Yet this is more than compensated by these other alterations which make this a highly effective introduction to “Tosca.” This production presents a somber and evocative visual landscape, with silhouettes of members of the orchestra playing chief characters enshrouded in darkness, and a balcony from which the choir sings in darkness. Fortunately Tosca’s stunning costume remains to keep some of the visual flavor. A bit of stage lighting is still preserved in a stylized fashion, as red lights are used on stage to reflect Tosca’s love, jealousy, and “burning passion.”

This reassembled, highly narrative format means a melodic aria (usually sung much later in the opera) starts things off in order to capture the audience’s attention. This standout aria is when Mario, played by Brian Jagde, sings “E Lucevan le Stelle” with full emotion and vocal power. The overture is placed after the opera has been introduced by Alston. She also helps prepare the audience for leitmotifs, such as those accompanying the dreaded villain Scarpia when he appears or is mentioned. Quinn Kelsey as Scarpia sings a highly emotional “Te Deum,” accompanied by the dramatic performance of the Opera Philadelphia Orchestra, superbly conducted by Corrado Rovaris. Last but not least, GRAMMY Award-winning soprano Ana María Martínez as Tosca beautifully performs an emotive “Com’è lunga l’attesa!” which is one of the most famous arias in Puccini’s masterpiece.

“The Drama of Tosca” has changed the visual landscape of opera by reducing set pieces and introducing narrative interpolations and musical rearrangements in order to compensate for the loss of some of the spectacle of live, grand opera. This is a highly successful example of how opera can win new fans in a highly engaging performance through the medium of streaming productions.

Running time: One hour and 38 minutes.

“The Drama of Tosca” is available online from Opera Philadelphia Channel and can be ordered here. While there seems to be no specific time the performance will be unavailable, sooner is better than later to enjoy this exquisite introduction to the world of Puccini’s “Tosca.”