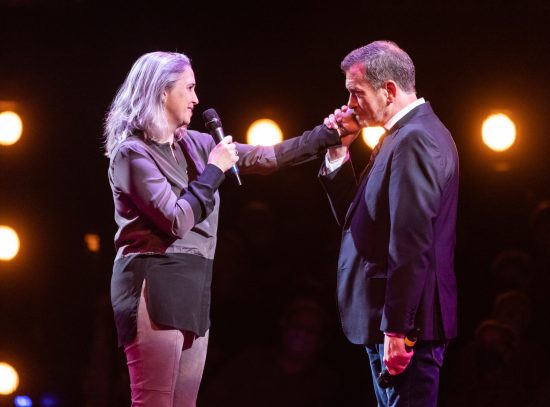 Free streaming on YouTube @sigtheatre 72 hours only Friday, January 14 at 5PM through Monday, January 17 at 5PM

Arlington, VA – Signature Theatre is thrilled to announce that special arrangements have been made to stream Everybody Rise: Signature Remembers Stephen Sondheim for free for a limited 72-hour period. Everybody Rise: Signature Remembers Stephen Sondheim was filmed at a live concert on Monday, December 13, 2021, when audiences gathered in Signature’s MAX Theatre to hear artists who appeared in Signature’s past productions of Stephen Sondheim’s musicals sing some of their personal favorite songs from his catalog. Sixteen songs from thirteen shows are included in the concert with both well-known and lesser-known pieces represented, such as “Marry Me a Little,” “Our Time,” “What More Do I Need,” “Sooner or Later,” “Children Will Listen” and “Send in the Clowns.” Everybody Rise: Signature Remembers Stephen Sondheim will have captions in English and stream on YouTube @sigtheatre for free from Friday January 14 at 5PM (EST) through Monday, January 17 at 5PM (EST).

The concert was filmed by Chiet Productions with camera operators Justin Chiet, James Gardiner, Jeremy Jacoby and Natalie Ridgley. Sound editing is by Ryan Hickey and James Gardiner edited and color corrected the concert for video.

Everybody Rise: Signature Remembers Stephen Sondheim is sponsored by John Benton and David Briggs through the Briggs-Benton Fund at the Arlington Community Foundation and Mike Blank

Signature Theatre is a Tony Award®-winning regional theater that broadens and brightens the region’s cultural landscape with its bold productions of challenging new and established works and engaging education and outreach programs. Founded in 1989 by Eric Schaeffer and Donna Migliaccio, and currently under the leadership of Managing Director Maggie Boland and Artistic Director Matthew Gardiner, musical theater is Signature’s “signature,” and the Theatre is renowned for its definitive Sondheim productions, inventive adaptations of overlooked or forgotten works, and investment in fresh new projects. Signature combines Broadway-caliber productions with intimate playing spaces and aims to be a leading force in U.S. musical theater.

Since its inception, the Theatre has produced 59 world premiere works—including 19 new musical commissions. Signature opens its doors to more than 100,000 people annually from the Washington, DC region and beyond and reaches more than 10,000 students every year through its innovative education programs, including the award-winning initiative Signature in the Schools. Signature has won 134 Helen Hayes Awards for excellence in the Washington, DC region’s professional theater and has been honored with 452 nominations.