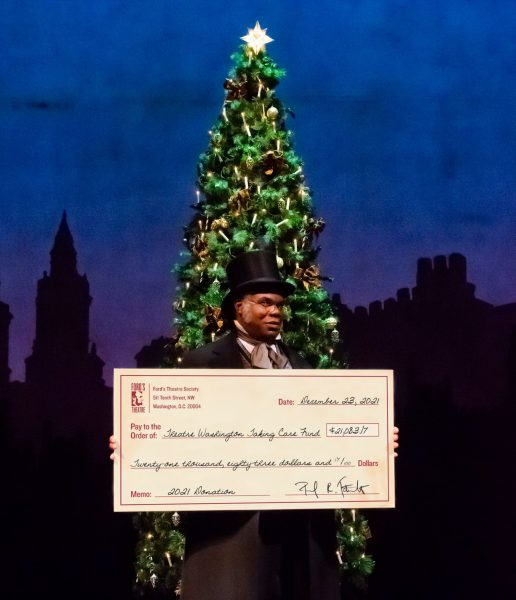 Yearly fundraising drive has raised more than $‭900,000 for Washington-area charities since 2009.

Washington, D.C. — Ford’s Theatre Society announced that audiences and the company of A Christmas Carol raised $22,109.83 for Theatre Washington’s Taking Care Fund during performances of this season’s A Christmas Carol. Since 2009, the company has raised more than $‭‭900,000 for Washington-area charities, aiding thousands within the D.C.-area who experience homelessness and hunger.‬‬‬‬‬‬

Donations were collected for Theatre Washington following curtain calls for performances from November 24 to December 22, 2021. Patrons could make a gift in person, by mail or online at www.fords.org. Members of the company and crew for A Christmas Carol and Ford’s Theatre Society staff also contributed to the campaign.

The Taking Care Fund has provided and continues to provide grants to theatre professionals throughout the disruption in available work caused by the pandemic. More than $800,000 has been distributed directly to local theatre-makers since March 2020.

Since 2009, A Christmas Carol audiences, cast, crew and staff have raised funds for Bright Beginnings, Homeless Children’s Playtime Project, House of Ruth, Food & Friends, N Street Village, Bread for the City, Covenant House Washington, Martha’s Table, Miriam’s Kitchen, So Others Might Eat (SOME) and Thrive DC in the spirit of giving and charity expressed in Charles Dickens’s A Christmas Carol.

“Year after year, these overwhelming gifts and kindness enhance the lives of those who keenly feel need in our region,” said Ford’s Theatre Director Paul R. Tetreault. “This tradition of generosity shown by the company of A Christmas Carol and our patrons truly brings out the best of the D.C. community.”

“I’ve long admired this annual initiative from Ford’s Theatre as a beacon of how our Washington area theatres are caring for our city in many ways beyond their productions,” said Amy Austin, President and CEO of Theatre Washington. “This year, when local theatre professionals were in need, it was poignant to receive this act of generosity for the Taking Care Fund.”

To donate to the Taking Care Fund, please click here.

Ford’s Theatre Society
Since reopening in 1968, more than a hundred years after President Abraham Lincoln’s assassination, Ford’s Theatre has explored and celebrated Lincoln’s legacy and the American experience through theatre and education. Under the leadership of Director Paul R. Tetreault, Ford’s Theatre has been recognized for the superior quality of its artistic programming. With works from the Tony-nominated Come From Away and nationally acclaimed Big River to the world premieres of Meet John Doe, The Heavens Are Hung In Black, Liberty Smith, Necessary Sacrifices, The Widow Lincoln and The Guard, Ford’s Theatre is making its mark on the American theatre landscape. For its accomplishments, the organization was honored in 2008 with the National Medal of Arts. For more information, visit www.fords.org.