Theatre Review: ‘Ain’t Too Proud: The Life and Times of The Temptations’ at the John F. Kennedy Center for the Performing Arts 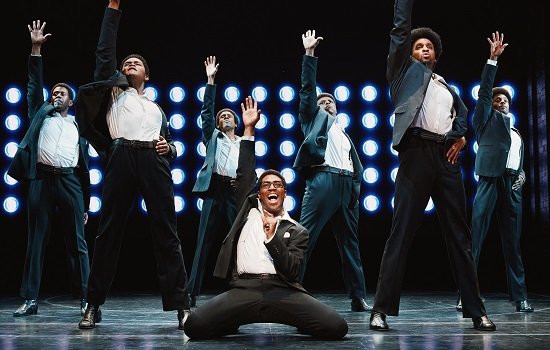 We are now two decades into the jukebox musical vogue, since the record-setting “Mamma Mia” premiered in 1999. Among the latest offerings in the genre is “Ain’t Too Proud,” a spectacular feast of music and movement, created by playwright Domonique Morriseau (“The Detroit Projects” cycle) and director Des McAnuf (“Jersey Boys,” “Tommy”). It is based on Otis Williams’ autobiographical story of the group (The Temptations, penned with Patricia Romanowski in 2002) and featuring songs from across the Motown oeuvre. The national tour continues through the coming year and is currently on stage at the Kennedy Center Opera House through January 16 (the same day it closes permanently on Broadway).

‘Ain’t Too Proud’ is a thrilling and well-executed musical ride through the memoirs of Otis Williams, even if it plays it safe by staying sometimes frustratingly close to one man’s view of the complex history of The Temptations.

Like “Jersey Boys,” “Beautiful,” or “Motown the Musical” that preceded it, “Ain’t Too Proud” uses the music to tell the story of the artists themselves. Right from the start, the audience is treated to high-energy performances of some of the greatest R&B hits—from “Cloud Nine” to “What Becomes of the Broken Hearted,” featuring Sergio Trujillo’s Tony-winning choreography, a brilliant mix of Motown style and trademark Temptations gestures, blended with hip-hop and musical theatre virtuosity. As a rule, the group is beautifully synched on stage when delivering a classic like “My Girl,” even when Marcus Paul James, as Williams himself, reveals the backstage drama that characterized each moment in the group’s journey to being counted among the greatest music artists of all time.

The show moves rapidly through three phases of Williams’ memoir—the gathering of the legends and their rapid rise to stardom; the challenges of keeping them together against internal and external adversaries; and finally the deaths of each member of the originals other than Williams himself. The pacing only slows for moments of grief; the assassination of the Reverend Dr. Martin Luther King, Jr.; the accidental death of Williams’s first-born son Otis Lamont Williams; the suicide of Paul Williams; the overdose death of David Ruffin; and the loss of Eddie Kendricks and Melvin Franklin to lung cancer and rheumatoid arthritis, respectively.

The greatest strength of the show is its unity of concept. All the elements of performance and production work together to maintain a rapid journey through Williams’s memories. The touring cast are perfectly suited to their roles, with James bringing a reserved wisdom that suggests his place as both the leader of the group and the chief voice of the story; James T. Lane adding a subtle tension to the role of Paul, foreshadowing his future deterioration; and Harrell Holmes Jr. presenting a stoical strength that captures Franklin as the voice of reason and chief supporter of Williams’s leadership. Jalen Harris as Kendricks, at times, captures the spotlight and, at others, seems desperate to do so, suggesting the vocal arranger and sometime lead often disagreed with the direction of the group, but was there through nearly all its history. Most of the attention is given to the star singer, and Elijah Ahmad Lewis gives Ruffin a flawless combination of energy, precision, and impulsiveness. All have amazing voices and polished moves, but it is the subtlety of their acting that carries the story such as when Harris revels in the spotlight during “Get Ready” or Lewis devolves from the eager team player who made “My Girl” and “Ain’t Too Proud to Beg” to the self-absorbed and self-destructive diva who would be replaced by Dennis Edwards (Harris Matthew) for a considerable time.

The production design thoroughly supports a rapid gloss of the Temptations’ history. Robert Brill cleverly provides mostly monochromatic backdrops and flats to take the audience through the marquees of their concerts, from the Fox Theatre to The Copacabana. Howell Binkley’s lighting design moves quickly from general illumination to concert glitz, notably flashing the follow spots across the audience in appropriate moments, such as during a kneeling tribute to MLK, which is presented to a somber delivery of “I Wish it Would Rain.” Peter Nigrini’s projections provide the most visible presence of external adversity, from Vietnam war protests during “War,” to seemingly picturesque country landscapes while the group is being threatened by racist thugs. Paul Tazewell’s costumes evolve with delicate precision as each member discovers his characteristic look (Williams mentions Franklin’s connection to blue directly) or their look changes for a particular show (brilliantly foreshadowed in a set of silver-white suits that change color with the lights in the opening “The Way You do the Things You Do”). There is no question that the artists are all on the same aesthetic page, and it makes for a well-packaged and always sleek musical experience.

Unlike other jukebox productions like “The Cher Show” and “Jersey Boys,” which cast the audience as attendees at the ultimate concert retrospective, drawing their audience into their sometimes very public struggles, “Ain’t Too Proud” makes the spectator a witness to a celebratory evening with Otis Williams. Morriseau’s book stays aggressively true to Williams’s voice and story from start to finish. Where “Motown the Musical” addressed the history of Berry Gordy’s legacy with some (albeit apologetic) regrets at those harmed by his personal and professional decisions, this musical is unchallenged nostalgia. Otis Williams brings together a quintet of legends and guides them (playing the role of ad hoc leader of a group where all five are ostensibly equal) through each stage of their ascension and enduring legacy.

While it addresses in moments the internal struggles the group faced—such as David Ruffin’s prima donna antics (disrupting rehearsals and missing performances until he is replaced by Dennis Edwards) or the group’s stand against segregated audiences—these moments are barely subplots in the overarching narrative of five men who would be kings. Further maintaining Morriseau’s efforts to take Otis’s story at face value is the unproblematic representation of Berry Gordy himself who, in this production, only serves as a straight-talking patriarch to the musicians (in one scene Otis discusses writing songs and is advised against it by Gordy; Otis accepts Gordy’s guidance with little hesitation and his dreams of songwriting are never mentioned again). No attempt is made to confront the past with a modern perspective and this musical accepts the events of the past as mere reality. Gordy’s failings are rare and exclusively professional, handing “War” to Edwin Starr because white audiences won’t accept “political black” from The Temptations, or giving unjustified attention to The Supremes.

An ironic shortcoming of the show (given Morriseau and Romanowski’s contributions) is the position of its female characters. The group’s first agent, Johnnie Mae Matthews; Williams’ wife, Josephine; singer Tammi Terrell, and even The Supremes exist in the narrative as distractions, victims, or mediocre adversaries. In the zeal of the collaborators to tell the story consistently through Otis Williams’s eyes, stories as complex and multi-layered as that of Johnnie Mae Matthews, the singer, songwriter and producer who in many ways launched the careers of both The Temptations and Berry Gordy, are reduced to who they were to Williams. Johnnie Mae appears as a calculating and ambitious nobody, cheating the group out of their fair share of earnings while The Supremes are comparative amateurs, whose position above The Temptations on marquees Williams blames on Gordy’s favoritism. Tracie Elaine Lee as Johnnie Mae and Najah Hetsberger as Josephine deliver powerful performances, but their characters never enjoy enough backstory or stage time for the actors to do more than tease the audience’s interest in the briefest of moments.

Overall, most of the two-plus hours of this event permits the audience to enjoy a story of accomplishment despite human failings, one which is mixed with some of the greatest music of all time and performed beautifully by a talented cast. The explosion of energy that celebrates the unification of the original group under their signature song “My Girl” and the honest conflicts revealed in their interactions during the emotionally charged “Papa Was a Rolling Stone,” make for a touching and entertaining evening of theatre.

To paraphrase what theatre critic Michael Reidel has repeatedly asserted, all Broadway shows go through a sufficient enough vetting process that they all are solid, no matter how they may measure against the very best of their genres. “Ain’t Too Proud” is a thrilling and well-executed musical ride through the memoirs of Otis Williams, even if it plays it safe by staying sometimes frustratingly close to one man’s view of the complex history of The Temptations.

“Ain’t Too Proud” runs through January 16, 2022 at The John F Kennedy Center for the Performing Arts Opera House, 2700 F Street NW, Washington, DC 20566. For more information and tickets, click here here. Masks and proof of vaccination are required. For more information, go to their website.