Theatre Review: ‘Bright Star’ at The Little Theatre of Alexandria 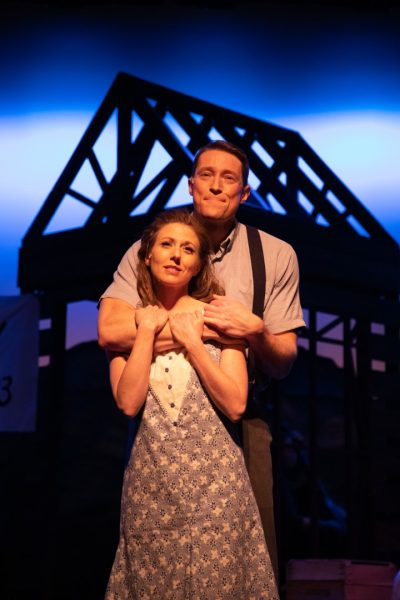 The Little Theatre of Alexandria’s (LTA) production of “Bright Star”‘ is a sprawling, Southern Gothic that is inspired by a true story. It’s a big-hearted story with the music, book, and story by Steve Martin and Edie Brickell. As an added treat, this run includes a nine-piece bluegrass band on stage. Given that the show also has a total cast of 27, the stage is packed, which is terrific for the dance scenes.

Jumping back in forth in time from 1923-24 and 1945-46 in North Carolina, it’s a tale about a pair of young lovers who court, have a child out of wedlock, are separated, and meet 20 years later. There is parental interference, attempted murder, classism, misogyny, redemption, and forgiveness. It is so sprawling that the characters are fairly broadly drawn with not a lot of nuance given all the themes. But the songs are sprightly and the scenes are short, so the show moves along briskly.

There are some standout performances among the cast. As the heroine, Alice Murphy, Maura Lacy does an excellent job at portraying the young, besotted Alice, as well as the college-educated, editor-in-chief of a Southern literary journal 20 years later. Her performance as the older Alice is pretty near perfect.

Audrey Landau Townsend plays Margo, the town bookseller, and she gives a witty performance of a young woman who loves books with a passion and is flummoxed by an admirer. She is not so flummoxed that she doesn’t give him a gentle shove and move on smartly.

As Jimmy Ray Dobbs, the other half of the star-crossed lovers, Joshua Nettinga brings earnestness and authenticity to the role of a young man who is determined to do the right thing by the woman he loves, but who is also stymied by his father and social custom.

The two assistants to Miss Murphy as editor-in-chief are a hoot. Aston Schaffer plays Daryl and Audrey Baker is Lucy—the two gatekeepers to the editor. They have a great deal of fun with their roles and bring some much-needed urbanism to the story, particularly in the song “Another Round.”

The musicians include Paige Rammelkamp and Lucia LaNave as the pianists and conductors; Justin DeLong on keyboard 2; Chuck Perryman on banjo; Patrick Costanzo on mandolin; Clyde Bowie and Noah Dail on guitar; Jason Labrador on fiddle; Tim Thulson on cello; Sara Korpeck Farris and Stephen Kelsey on bass; and Emilie Mitchell and Sedale McCall on percussion.

Emily “EJ” Jonas wears three hats—director, intimacy coordinator, and fight choreographer. For the most part, the direction is straightforward, but some of the scene changes are awkward (the actors change the scenes, at times with flourishes) and there is one moment when Alice is stepping out of her shoes and one of the ensemble crawls after her to retrieve them. It was a little disconcerting in the dancing in the first act for Alice to be mostly barefoot while the rest of the cast wore shoes. Perhaps it was meant to convey her innocence or her lower social standing than Billy’s, but it wasn’t clear what purpose it served.

Matt Liptak’s set consists of large wooden boards (three to each side of the set) that the props are laid on or hung. Given the height of the theatre, it worked. There was enough sense of space that the stage didn’t feel as crowded as it sometimes was.

Lighting designers Jeffrey Scott Auerbach and Kimberly Crago (along with assistant lighting designer Cleo Potter) did a nice job of setting the moods for the various scenes and songs. Sound design is by David Correia (assisted by Keith Bell, Sarah Smith, and Alan Wray) and the voices were not overshadowed by the musicians.

The costumes designed by Jean Schlichting and Kit Sibley (assisted by Janus Johnston and Lanea Sterret) were spot on for both periods and definitely showed the difference in small town clothing versus city chic.

This is a pleasant evening, particularly if one enjoys bluegrass music and the well-trod genre of Southern Gothic.  “Bright Star” is handsomely produced, nicely sung, and there’s some excellent acting. Combined with the mostly happy ending, it makes for a amiable evening.

Running Time: Two and a half hours with a 15-minute intermission.

Show Advisory: Adult themes and references to violence against children.

“Bright Star”runs through February 5, 2022 at The Little Theatre of Alexandria, 600 Wolfe Street, Alexandria, VA 22314. For more information and tickets, call the box office at 703-683-0496 or go to the website. The theatre requires proof of vaccination and wearing of masks in the theatre.