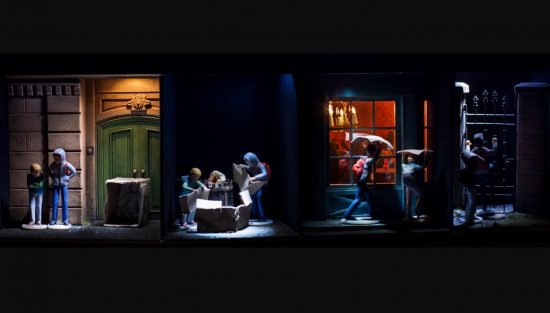 Image from “Flight” by Vox Motus at Studio Theatre. Photo by Drew Farrell.

“Flight” contains no live actors—and no actors at all, save for those heard over headphones. It has no traditional set, and yet has dozens of them. It is a work of immersion experienced in isolation, yet is still a shared experience—and it is a must-see experience.

…it is a must-see experience.

Created by Glasgow theatre troupe, Vox Motus, “Flight” tells the story of brothers Aryan and Kabir, fleeing from Afghanistan on a perilous journey across Europe to London. We are dropped into their lives in their Kabul home, with no information on what happened to their parents, how they gathered the cash for their escape, and what they hope to find once they reach England. Over 45 minutes, we travel with the two boys across six countries, a trek laden with abuse, trauma, setbacks, and occasional moments of joy, euphoria, and hope.

“Flight” is based on the 2011 novel, “Hinterland,” by New York Times foreign correspondent, Caroline Brothers. The brothers are based on refugee boys Brothers met and interviewed at makeshift refugee camps in France, the locale of some of the most harrowing scenes in the production.

The narrative is told through a slowly revolving series of more than 200 intricate dioramas, with lights popping on and off to guide the eye to the next frame. The effect is similar to a graphic novel or a zoetrope. Each audience member is in a small, solitary viewing booth, listening to the brothers’ dialogue and the sounds of the voyage on headphones. The moments depicted in the carefully carved frames vary from starkly realistic to soaringly fanciful to nightmarishly scarring.

The motion of the dioramas means that none of the dozen or so individuals at each seating are viewing the same moment at the same time. It also adds an illusion of movement to the stationary figurines. The level of detail in the various miniatures is remarkable—attendees are urged to peer deep into each small box as it passes for easy-to-miss elements.

“Flight” was adapted from the novel by Oliver Emanuel and directed by Candice Edmunds and Jamie Harrison. The latter is the effects and illusions designer behind “Harry Potter and the Cursed Child” and other works. The story is heightened by Mark Melville’s evocative sound design and score.

While “Flight” predates the COVID pandemic—it was commissioned by the Edinburgh International Festival five years ago—it is perfectly suited to the moment. The parameters of the piece let individuals view it safely, and still share a live experience with others.

Running Time: The full attendance time per patron is approximately one hour and 15 minutes, given staggered seating of the audience. “Flight” itself lasts approximately 45 minutes.

Advisory: Contains scenes of peril and briefly depicts a sexual assault. This production is not recommended for audiences under the age of 13, and some audience members have found the experience of viewing the show claustrophobic.

“Flight” runs through March 6, 2022 at Studio Theatre, 1501 14th Street NW, Washington, DC 20005. Click here for tickets and information. NOTE: All patrons must wear masks and show proof of vaccination in order to attend a performance. Performances of “Flight” are capped at 25 patrons. Studio Theatre will clean individual viewing booths between performances.