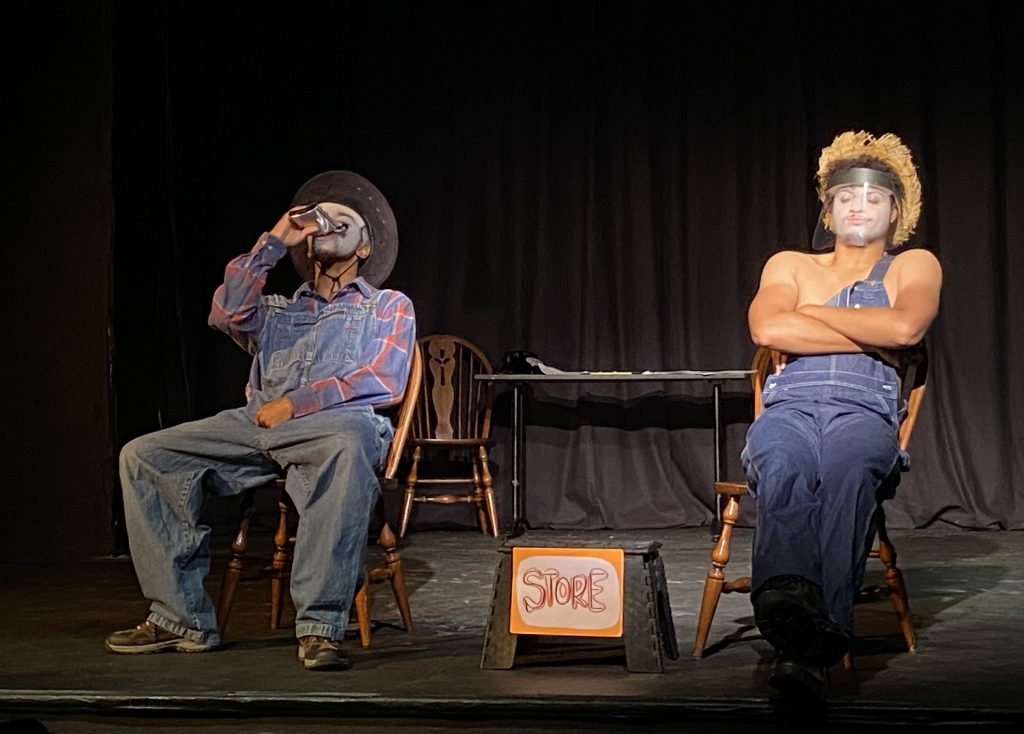 It’s a morning like any other morning. The sun is bright; it’ll be hot later. A pair of shopkeepers make small talk. But something is awry. Peculiar. Gradually, the men realize that all of the most productive of their citizenry seem to be gone. Elsewhere in town, a husband and wife argue while their baby cries. A diaper needs changing—where is Lula? The mayor’s shoes are dull and dusty from the street. The wastebaskets haven’t been emptied. How can this be? Like something out of “Atlas Shrugged,” this sleepy southern hamlet must come to grips with a crisis that threatens to destroy its social and economic order. “Where are all the n____s?” Search parties are deployed. Panic erupts. The National Guard is summoned. Mayor Henry R. E. Lee takes to the airwaves in a final, desperate attempt to beg or bribe his missing constituents to return. So goes Douglas Turner Ward’s 1965 play “Day of Absence,” appearing at Arena Players this month. It’s paired with another of Ward’s plays, the one-act “Happy Ending,” in an ambitious evening of social satire that hits its targets.

…an ambitious evening of social satire that hits its targets…fine ensemble work all around.

“Happy Ending,” directed by Isaiah Evans, opens the production. In a convincing impersonation of kitchen-table-melodrama, we meet Ellie (Gina Lee) and Vi (Janette North), two sisters who work as domestics for a wealthy white family. They are crying, wailing, and practically keening over the impending divorce of their employers. Their nephew, Junie (Antoine Williams), comes home to this anguished scene and scolds the women, lecturing them about shame, while having none himself. In a biting and hilarious twist, Junie ultimately finds a shoe that fits, and wears it. Clocking in at 48 minutes, “Happy Ending” feels like a very tight one-act play. Evans’ pacing is relentless, and the one-two punch of Lee and North perfectly counters the rising indignation of Williams, who also plays to the hilt, and fully embraces, his character’s irony. While the dialogue is rapid-fire, the blocking is static. Most of the play consists of a neatly framed tableau at the family table. Near the finish, the three are joined by Arthur (Tavon B. Roundtree), who helps navigate the group towards the titular ending.

“Day of Absence,” directed by Marc Stevens, follows an intermission. It’s long for a one-act at 82 minutes, but never drags. In it, a cast of 11 presents a mosaic of short scenes that illustrate the unnamed town’s tragedy. Stevens (along with stage manager, Sandra Meekins) does a good job of keeping things moving, thanks in part to a minimalistic set by Bryon “Tony” Rodgers, Sr. The cast performs in whiteface, beginning with Antoine Williams as Clem and Emmanuel West as his Luke. If the effect is reminiscent of “An Octoroon,” it’s fitting to remember that this treatment predates the latter play by 50 years. West and Williams are the perfect set-up here—slow-witted bumpkins who can’t quite seem to process their realization of a change to their town. William A. Walker, as the mayor, is delightful in his complete panic, as is Roundtree as his assistant, Jackson. Cherill R. Ashton and Tina Canady share the role of Mary, mother to the nanny-less baby, as well as delightfully outraged members of women’s clubs. Furman T. Day is a harried courier; Shateera Hatchett is equally stressed as a switchboard operator; and costume designer Victoria Jackson appears briefly as her supervisor. A special treat, though, is a cameo appearance by Arena’s Artistic Director, Donald Owens. It’s fine ensemble work all around.

Running Time: Two hours, 27 minutes with a 15-intermission between plays.