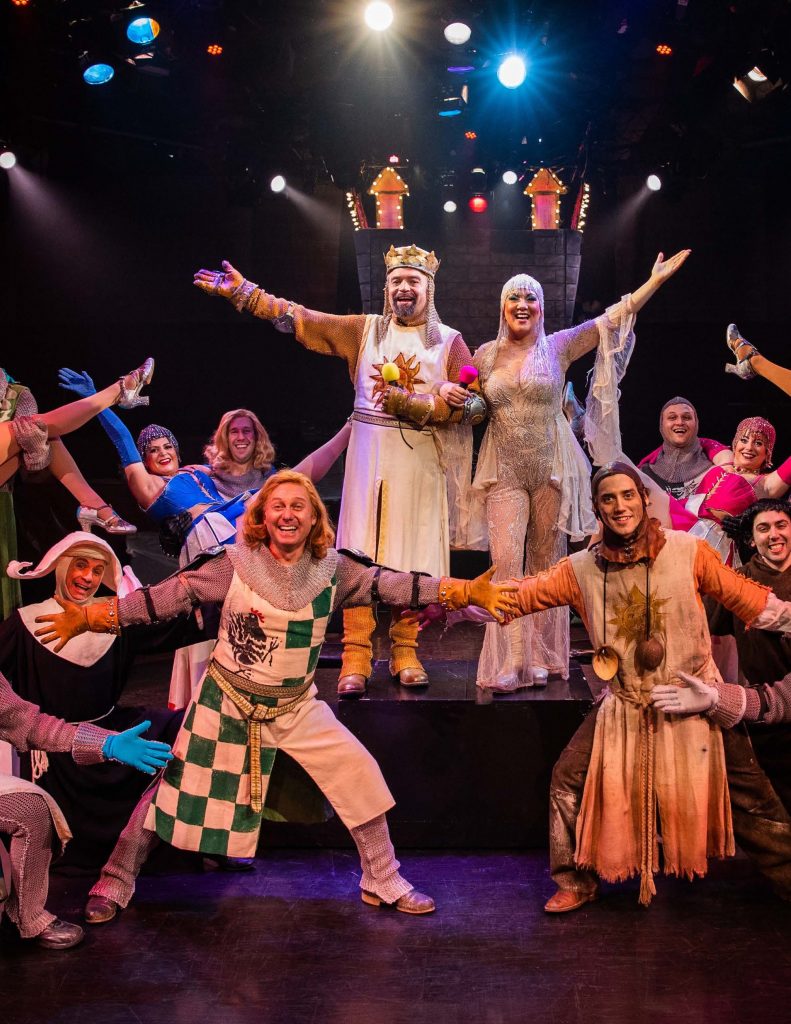 Would you like a break from the pandemic? A chance to leave the house and enjoy a night out? Say no more, nudge, nudge, wink, wink. Toby’s Dinner Theatre has just the medicine to cure you—”Monty Python’s Spamalot,” a raucous, musical based on the 1975 film, “Monty Python and the Holy Grail.” From the masterful comedic mind of Eric Idle, the tale of King Arthur and his Knights of the Round Table as they search for the Holy Grail is recreated in a clever spoof, resulting in a whimsical, side-splitting good time. The fun starts as you enter Toby’s unique venue. Welcoming you are the actors who act as hosts, wait staff, bus people, and also serve up improv comedy. This breaks the literal ice, walking in from freezing temperatures, as you are warmed with merriment, mirth, and mead. The stage is theatre in the round which enhances the experience and offers a new perspective, with the audience participating in the frivolity.

For Monty Python fans, all the skits, lines, looks, and sounds are familiar—yet with a fresh interpretation…transport you to a magical, mystical place where lunacy and laughs abound.

The director and choreographer, Mark Minnick, sets the tone straight away in the first act. One would be advised to buckle up as it is a joy-filled, roller coaster ride. Mark manages order in this chaos and has created resolutely directed, spot-on choreography. If you look carefully, you may also see him playing a character or two. From the beginning, we are given a guide, a historian of sorts, to lead us through the story—superbly done with the perfect English accent, at least from an American’s perspective. He is brought on at varying intervals to ensure the audience is on track. The first scene, ” Bring Out Your Dead,” has one of the actors crying in defiance, “But I am not dead yet,” and he breaks into an exuberant song and dance routine saying he’s feeling fine…never felt better. Unfortunately for him, he gets hit with a shovel and thrown into the dead heap anyway, as they don’t have time to wait for him to die and need dead bodies for the wheelbarrow. For Monty Python fans, all the skits, lines, looks, and sounds are familiar—yet with a fresh interpretation. For those not familiar with Python-esque humor, you will still enjoy the absurdity if you can leave behind political correctness for the evening.

The first act sets up the story for the show. King Arthur (Shawn Kettering) and his trusted servant Patsy (Quadry Brown) are on a quest from God (Eric Idle’s voice), to find the Holy Grail. Quadry did a fabulous job of banging two coconut halves together to make the sound of horse’s hooves for the imaginary horses they ride. All the actors did a spectacular job of improvising riding imaginary horses, at times, in cadence.

The Lady of the Lake (Janine Sunday) truly stole the show with her expansive vocalizations. Her singing is as good or better than any Broadway actress or pop star. She has a range like Lady Gaga combined with a Cher persona, showing her magnitude of talent for both singing and acting. All of the cast are multi-talented—melodious singers, acrobatic dancers, and truly believable role-players. Musical director Ross Scott Rawling weaved the music seamlessly throughout with the classic, Broadway feel and perfectly-timed, comical sound effects. The sets by David A. Hopkins transported us to the Middles Ages—a murky and sullied time in history. The castle turrets were used well for the French Taunter (Adam Grabau), as he barked with his very nasal French accent, “I fart in your general direction,” complete with sound effects enhanced with a horn.

I would be remiss if I did not mention the buffet was both abundant and delicious with fanciful food choices, named after the “Spamalot” theme. Those with hearty appetites could even go back for seconds. The ticket price for dinner and a Broadway-equivalent show is an unparalleled bargain fit for a king.

The show takes a brief detour from hilarity into an inspiring tune, “Find Your Grail,” as each knight expresses his inner search for meaning. This flows into the tongue-in-cheek song, “Always Look on the Bright Side of Life,” taken from the 1979  Monty Python film, “The Life of Brian.” The silliness continues when the entire audience is invited to sing along with the cast while they dance in burlesque style.

Surely Toby’s embodies both this song and the line “I am not dead yet” by its ability to weather the pandemic storm, much like the Middles Ages endured the plague. Although they still are not allowed to seat at full capacity, Toby’s are very much alive and well—and taking every precaution for a safe and enjoyable experience.

I highly recommend this show. It will transport you to a magical, mystical place where lunacy and laughs abound. So forget about the pandemic and come see this show with a high efficacy rate of fun and enjoyment! You will not be disappointed.

Running Time: Two and a half hours, including two 15-minute intermissions.