Theatre Review: ‘Much Ado About Nothing’ at Spotlighters Theatre 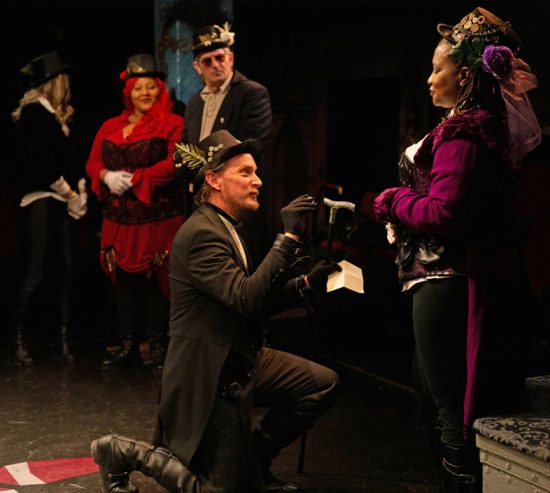 Shakespeare delivered with clarity, a diverse and sizable cast, Edwardian steampunk glamor, many laughs, and romantic charm awaits at the Audrey Herman Spotlighters Theatre. Opening a live production of any kind is a Herculean achievement in 2022. Director and designer Michael Blum, with the team at Spotlighters, have managed to pull together a first-rate offering of one of Shakespeare’s greatest comedies, “Much Ado About Nothing.”

As Blum writes in his director’s notes, Shakespeare’s 1598 comedy is a blend of Elizabethan English life and and an exotic Mediterranean locale. The tale of two pairs of would-be lovers—the “merry war”(ing) Beatrice and Benedick (Sharon Carter and Brian Kraszewski) and the naïve Hero and Claudio (Kaitlin Ruby and Paul Mancano)—could truly be set anywhere. Blum takes this to heart by creating a “never-never land that is part Messina (Sicily) and part a suburb of […] London.”

The audience is immersed in Blum’s vision from the moment they sit down amid the photomural designs and steampunk décor, co-designed by Blum and technical director Alan Zemla. The eye scans a cityscape of 19th century England; a forest of masked figures creeping from the brush; clocks and gears dressing the pillars; and a gold and silver pipe organ reminiscent of H.G. Wells. The organ literally sets the tone for the performance, providing the first taste of “Sigh no more, Ladies”—a leitmotif that charms throughout the production—before finally providing the cast a song to celebrate the marriage of the two couples. Love prevails against both the internal quarreling of Beatrice and Benedick and the poison rumors of Don John (Andy Belt).

Finding a comfortable place on the continuum of comedy from classical to sitcom, the actors spar to dominate verbally, most playing the role of “feeder” and “funny one” at different points. Carter and Kraszewski approach the text with high-paced wit and self-satisfied conceit.

The rest of the cast is equally suited to their roles, creating an award-worthy ensemble of characters. There is Frank Mancino’s intense, kind-hearted, Don Pedro who guides the couples to their happy endings with a sometimes imperfect but sincere wisdom. Joe Mariano is atypically playful and energetic as Leonato (Governor of Messina and father of Hero). This approach lends well to scenes where he is challenging Beatrice’s cynicism toward love, but also in moodier moments such as when he condemns his daughter for perceived bawdry, his awkward rage showing a rich internal conflict. One of the stand outs is Ruby’s emotionally-charged Hero whose strength disrupts the victimization of the maligned would-be bride in her fiery response to Claudio’s abuses and accusations.

There’s always something to watch during the evening. Blum devises clever staging. Belt angrily sweeps by while being called out as illegitimate and Carter “conceals herself” behind the ubiquitous pillars of the Spotlighters’ stage. There’s an adorable canine star-turn of Maiziey as Crab, a Dog. There’s even the classic cinematic trope of the Keystone Cops with Chloe Scully and Stephanie Pokras as the watchmen in the charge of Dogberry (Damien Gibbons) and Verges (Glen Charlow), whose business evokes the best of Shakespearean clowning.

“Much Ado About Nothing” is a play that lends itself to comedy and pathos. While this production is mainly focused on the former, there’s no shortage of touching moments, especially between the couples. Carter delivers a jab like “you have no stomach” and Kraszewski rails against love with lines like “I cannot endure my lady tongue” with timing and poise. They are at their very best when the façade falls and exchanges like “Kill Claudio/Not for the Wide World/You kill me to deny it” show the people beneath the pretensions.

The glorious mix of boots, corsets, top hats, and vestments rich with regalia by Board Member, Julia Golbey; the vintage party choreography of Spotlighters’ new Associate Artistic Director, Brandon Shaw McKnight; the gold and copper party and plague doctor masks by Blum; and the subtle lighting design of Al Ramer all work well to support the vintage motif. Though not always strictly Edwardian, nearly every detail works to transport the audience to another land and time, in perfect synch with the predictably anachronistic Shakespeare text.

It’s as close to perfect as live theatre can get, even without the burdens of a two-year pandemic. If some minor details felt off (an oppressive, classical soundtrack prior to the show; bits like a spit-take delivered without the actor actually taking a drink) or could be attributed to opening night jitters (some unmatched transitional audio; text delivered too fast or stumbling over the words) vie with the comedy or Edwardian style, the experience of seeing a richly conceptualized production with a skilled cast is an extraordinary accomplishment in these challenging times for live theatre. This experience at Spotlighters is an hilarious and touching one that must not be missed.

“Much Ado About Nothing” runs through February 6, 2022 at The Audrey Herman Spotlighters Theatre, 817 Saint Paul Street Baltimore MD 21202. For more information and tickets, click here here. Masks and proof of vaccination are required. For more information, go to their website.