Theatre Review: ‘Sam & Dede or My Dinner With André the Giant’ at Washington Stage Guild 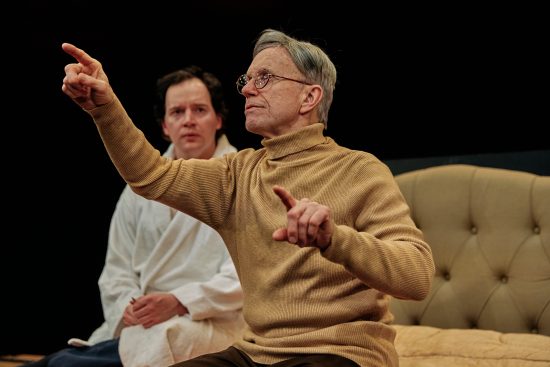 (L-R) Benjamin Russell as Dede and Alan Wade as Sam in “Sam & Dede or My Dinner with Andre the Giant” by Gino DiIorio at Washington Stage Guild through February 6. Photo by DJ Corey Photography.

The current offering at Washington Stage Guild is a delight and unexpectedly so. It’s a fascinating fictional tale (based on a very tiny nubbin of truth) of an episodic, shared journey through life by two very disparate people—the playwright Samuel Beckett and the wrestler, André the Giant. From Andre’s teenage years to his mid-thirties, the play covers about 20 years in six scenes that just flow.

…a delight…an elegant, understated work that is both mesmerizing and comforting at the same time.

This is a show with a lot of flow to it—the script, the relationship between the two men, and even the chemistry between the two actors. Much like a Beckett play, it doesn’t really resolve so much as evolve. On a snowy Sunday afternoon, it invited the audience in and kept us in the moment, seemingly effortlessly.

The two meet when Sam (Alan Wade) arrives to drive Andre (Benjamin Russell), or Dede as he prefers to be called, to school. He’s obviously much larger than his schoolmates and he’s lonely, angry, resigned, and afraid of so much in the world. Sam is driving him to school because Dede’s father repaired the roof of his cottage in the village where they live and it was more expensive than Sam anticipated. He’s working off this debt and from such a transactional beginning, different worlds open up for each of them.

They are very different worlds. Beckett becomes a Nobel prize winner for literature and Dede leaves his confining (in so very many ways) village behind to become a famous wrestler. The two men meet by chance at times over the years—at the opening of a play by Beckett; in the street; in a hotel room for a long, boozy dinner; and finally, who knows? The final scene of the play is a distillation of life’s absurdities and it’s still charming.

As in a Beckett play, not a lot seems to happen, but the words (and the silences between the words )somehow unite the two in a quest for understanding. It is perhaps because they can just relax with each other. They’re not competitors and they don’t want anything from each other. The two are supportive of each other’s fields without having to fully understand them.

The script is also funny. The very matter-of-fact way that Dede views the world versus the fog of confusion that seems to surround Beckett—except when he’s writing—is just funny. It’s based on a germ of truth. Beckett was one of a group of neighbors who used to give rides to some school children in a village in France, and one of them was Andre. They didn’t develop a special relationship in real life. It took Gino Dilorio to pick up that somewhat unprepossessing fact and craft a witty, gentle, and charming tale about identity, making connections, and living in the world when the world doesn’t always fit.

As Sam Beckett, Wade is delicious. He’s obviously physically smaller in stature than Russell as Dede, and yet his wit and intelligence is gigantic. Russell plays both the young teenage boy and the 30-something Dede with a verve and physical presence that hit the right notes. He’s big physically, but his heart is also big, and so is the stoicism he has about fitting in or not fitting in the world. Both actors give us rich performances that draw us into their lives as much as the words of the script do.

The stage design by Carl Gudenius and Jingwei Dai is simple but effective. In the first three scenes, Beckett is driving a Peugeot truck. In the latter three, the truck has been turned around to become the bed in the hotel room, with a few simple other accoutrements to finish the sense of a transient, but comfortable, space. Dede knows his life is not likely to be long, and seems quite comfortable in his peripatetic world. The lighting by Marianne Meadows is subtle and so in tune with the words of the play that you can just see the times of day and picture the scenery of early morning and late evening.

Steven Carpenter directs with a keen sense of the rhythm of the words and scenes. He also uses the physicality of the two men to underscore the play’s themes so it seems very natural.

This is an elegant, understated work that is both mesmerizing and comforting at the same time. Go see it. It doesn’t disappoint.

Running Time: Approximately an hour and 40 minutes with a 10-minute intermission.