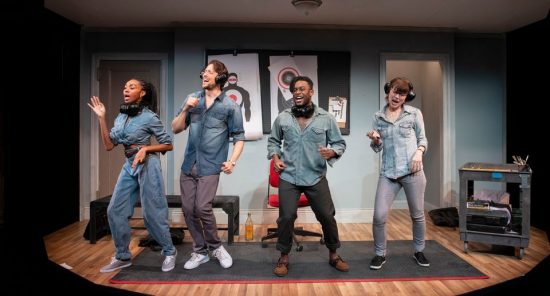 “White Noise” is not an easy play. Playwright Suzan-Lori Parks takes the dark history of America and presents it in a searing drama that forces four people to confront some very deep truths about themselves and each other and how much of this history is embedded in their DNA—and how confronting these realities will forever change them.

…this group of actors brilliantly mines everything that Parks strives for in her morality play on the dark underpinnings of the American social experiment. That’s a very good reason to see it.

Take four college friends—Leo (RJ Brown), a Black artist who is sort of on the edge of a breakthrough; Dawn (Katie Kleiger), a White lawyer who works to fight injustice in the system; Misha (Tatiana Williams), a Black podcaster who is premiering a show called “Ask a Black;” and Ralph (Quinn Franzen), a White inherited-trust-fund associate professor on track for tenure. During college the four dated and formed a band, but now they’re in their early thirties looking to make it in the American capitalist system—and they hope to live up to their woke ideals while they do so.

The story arc revolves around forty days in their lives. Leo is an insomniac and when he can’t sleep, likes to walk around the city at night. On one of these nights he is racially profiled and roughed up by some police. Bruised and shaken, he comes home and Dawn immediately makes plans to sue. Meanwhile across town, Misha is starting her broadcast and Ralph confesses he didn’t get tenure. He lost it to another candidate who published more and isn’t a white guy.

From there, the story spirals into dark and sharp places. When the four meet up for their weekly practice at the shooting range Ralph owns, the talk is fast and bright, but there’s an edge. Later, Leo offers Ralph a deal and a contract to become Ralph’s slave for 40 days. He’ll accept the yoke in exchange for being under the protection of a White man. While Ralph initially demurs, he accepts. Dawn and Misha are horrified, and Misha temporarily moves in with Dawn to continue her podcast.

At first, Leo and Ralph treat this contract almost as a lark. But then Ralph buys an old iron punishment collar and orders Leo to put it on and to stand on the coffee table. Leo expects Ralph to remove it, but Ralph goes into another room and starts working on a story for publication, leaving Leo in limbo. It’s one of the most horrifying images in the play.

Act 2 brings further buried truths to light. White supremacy rears up as Ralph is invited to join a “White club” by his department head who saw Leo in the street wearing a shirt with a homemade sign on the back proclaiming him the property of Ralph. It also rears up in Dawn as she tries to fix or save Misha, just as she did with Leo. Misha resists and Dawn can’t—or won’t—see her actions for what they are. More culture appropriation takes place and there is a sexual betrayal and threats of violence. The only one that seems happy with this social experiment is Ralph—he’s found his people.

Parks makes her point vividly. How do you change a system that favors one side so blatantly and insidiously at the same time? How does a society acknowledge its dark beginnings, try to atone, and move forward to real inclusion and understanding of a common humanity? Is it even possible? The brutality in this play is mostly psychological and emotional, and it is brutal. One thing the audience needs to do is to let go of logic. The whole concept of such a contract—and that Leo was able to get an attorney to draw one up (from Dawn’s firm, no less)—is a huge hole. So one has to accept this deus ex machina and go from there.

It is the four actors who make this so believable and invest us in their journey. They are superb, though as archetypes they aren’t particularly fleshed out in the script. They each bring nuances to their characters that help round them out. Franzen as Ralph, in particular, gives a performance that makes us uneasy from the start. He finds the hollowness in his character. As for Brown (as Leo), he makes it totally believable that a Black man in his 30s could suddenly become aware of how tenuous his foothold in society really is. The police brutality shakes his view of himself and his place and he goes deeper to find his bedrock. Even though it seems that Brown goes temporarily insane with the slave contract, it’s almost as if he is using it as an electric shock to wake himself up.

Kleiger (Dawn) gives a more subtle performance than seems obvious at first glance. There’s a subliminal panic when she realizes that she can’t fix something, that she isn’t the total savior. You can almost see her repressing any inkling that might threaten her world view and her view of herself. In Williams (Misha), there seems to be a deeper anger than she lets on. In one scathing conversation, she spits out how she piles on the expected Blackness her mostly White audience seeks as they ask her questions. She’s using them to make a place in the world.

Scenic designer Alexander Woodward creates a turntable set of the three settings—Leo and Dawn’s pokey studio; Ralph and Misha’s more upscale living room (although the furnishings are only about one step up from a college dorm); and the gun club. The turntable works well at pivotal moments, particularly when Ralph is left standing on the table wearing the heavy collar. Alberto Segarra designed the lighting and Fan Zhang the sound. Chelsea Pace is the intimacy and fight choreographer, and she choreographs a drunken sex scene that is the opposite of prurient—it underscores the hollowness of the two characters. Dominique Fawn Hill perfectly captures the core of the characters in her costume designs, especially Ralph as he rejects any truths that might make him face his weakness.

Director Reginald L. Douglas does an outstanding job of teasing out the nuances in the characters and keeping the tension alive to the end.

“White Noise” is not subtle, but this group of actors brilliantly mines everything that Parks strives for in her morality play on the dark underpinnings of the American social experiment. That’s a very good reason to see it.

Show Advisory: For adult audiences only. Contains a sex scene, drunkeness, and adult language, the use of herbal tobacco, flashing lights, and multiple gunshot sound effects.