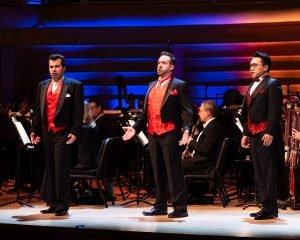 The story of Turandot has appeared in a surprising number of works, including an eighteenth-century play by Carlo Gozzi, a romantic drama by Friedrich Schiller, and even a modernist offering by Bertolt Brecht. Yet it is Puccini’s operatic version of the story which is most widely known, despite the fact Puccini left it unfinished. It was completed by Franco Alfano. Surprisingly, Puccini knew not only the Italian version, but admired the version by Schiller. It is this highly-romanticized version which clearly influences the melodramatic tone of the storyline, accentuated with a vivid orchestral score by Puccini. This orchestral landscape is so visual, that one scarcely noticed that the recent Maryland Lyric Opera production at the Music Center at Strathmore was a concert version, for it put the focus even more on the expansive orchestra. Opera singers and a large chorus were also present, of course. These elements, along with very symbolic changes in lighting as well as effective English subtitles, augmented the opera experience for all who attended.

…this orchestral landscape is so visual that one scarcely noticed that the recent Maryland Lyric Opera production at the Music Center at Strathmore was a concert version, for it put the focus even more on the expansive orchestra.

Possibly because it was completed by someone else, “Turandot” is not performed as much as Puccini’s other operas. The setting is China of long ago and features the Chinese princess, Turandot, who rejects the idea of marriage to anyone. If a suitor desires her hand in marriage, he must answer three of her riddles correctly. Those who fail, meet (borrowing here from Schiller’s dramatic version) “a dreadful end,” beheaded at the hands of the executioner for being “incapable of solving the riddles of this Sphinx.” Now comes Prince Calaf, who is more wily than the others and, we presume, more ardent in his passion. Turandot notices how he exudes confidence, which perturbs her greatly. Will Calaf answer her questions correctly or meet the fate of the others? “Although dead, we still dream of her”—Calaf hears the lugubrious chorus of the dead in a spooky undercurrent by the orchestra.

Colored lighting was used to create symbolic effect in lieu of sets. The opera starts with red-toned lighting—red being an association with prosperity in Chinese culture. Here it also suggests the ubiquitous death theme in the opera. When Turandot appears, which is quite a bit into the opera, ice-cold blues and deep-freeze greens appear from the lighting palette, referencing Turandot’s cold character, mentioned in the libretto again and again (“white as jade, cold as blade”).

Visual elements were also added as various characters come on stage. Three Imperial ministers are always seen together, wearing red vests. Jonathan Burton as Calaf and Alexandra LoBianco as Turandot increase the visual spectacle of the opera with dramatic gestures. Later, when one character dies, it is presented visually in a highly stylized way. The deceased walked out with four men dressed in black, all of which suggested pallbearers bearing a coffin.

The singing was spectacular, with tenor Burton providing a rousing “Nessun Dorma,” the standout aria of the opera in Act Three. He blended well with beautifully-voiced soprano, Alexandra LoBianco, in the duet involving Turandot asking, and Calaf solving, riddles. A special mention needs to be made of Morris Robinson portrayal of Calaf’s father, Timur, done sympathetically and with a powerful bass voice. The tragic figure of Little Liu was emoted by Nicole Heaston, who poignantly sings, in soaring phrases, of her unrequited love for Calaf.

The three Imperial ministers Ping (Javier Arrey), Pang (Joseph Michael Brent), and Pong (Yi Li) were all excellent, but special praise is due for Mr. Arrey. He is especially gifted in uniting a fine voice and acting skills, bringing the drama to life in this opera-in-concert experience. The whole production worked so well together due to the combined talents of artistic director Brad Clark, visual supervisor David Gately, lighting director Stuart Duke, chorus master Steven Gathman, and conductor Louis Salemno, with his superb orchestral direction.

The opera showed that (to quote the libretto) those “girded with ice shall be vanquished by the fire of love,” especially when this work is performed with the engagement and passion of all of the fine artists who participated in the Maryland Lyric Opera production.

Running time: Approximately 2 hours and 30 minutes, including one intermission.