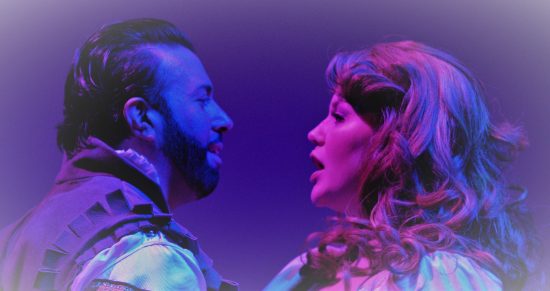 On February 12, Maryland Opera offered its “Variant Valentine” program—a variety of Valentines with staples from the operatic and American musical theatre worlds. The program was live-streamed from the beautifully decorated home of Maryland Opera board member, Rob Hair (and Steven Ralston), on the Maryland Opera’s Facebook page.  “As we all navigate these constantly changing pandemic waters,” Maryland Opera stated in its press release, “we are committed to continuing to offer our vibrant, creative, and thrilling opera performances.”

The evening more than lived up to Maryland Opera press release’s understated promise of an ‘exciting Valentine’s experience for our audience.’

Things began in a boisterous way with soprano, Christine Lyons, and tenor, Dane Suarez, holding forth with the drinking song (“Brendisi”) from Verdi’s “La Traviata.” Baritone Craig Verm entered with a moving “Da, viene alla finestra” from Mozart’s “Don Giovanni.” Mr. Verm then took us off the beaten path with a thrilling performance of “Questo amor” from Puccini’s lesser-known opera, “Edgar.”

A special highlight of the evening was “Vogliatemi bene” from  the close of Act I of “Madama Butterfly,” with Miss Lyons and Mr. Suarez featured again, this time in a moving duet as Butterfly and Pinkerton. In their evocative performance, the two singers brought forth all of the drama of the opera house.

Two-thirds into the program there was a shift away from the operatic repertoire into music from Hollywood films, yet nonetheless with a classical touch. Mr. Suarez performed a powerful “Be My Love,” made famous and forever associated with legendary tenor, Mario Lanza, in the film “The Toast of New Orleans.” Miss Lyons returned with a poignant rendition of “My Ship” from the Ginger Rogers film, “Lady in the Dark,” with music penned by Kurt Weill. Weill famously straddled the operatic and popular music worlds, as does this “Variant Valentine” program.

Broadway is remembered in this concert precursor to Valentine’s Day. As befits the atmosphere of this program and the operatic talents of the performers, Broadway standards of love were selected associated with operatic-style timbres of the past. This is certainly true when Mr. Verm evokes memories of one-time Metropolitan Opera star, Ezio Pinza’s, romantic singing of “Some Enchanted Evening” in “South Pacific” and of Robert Goulet belting out “If Ever I Would Leave You” as Sir Lancelot in Lerner and Loewe’s “Camelot.” Mr. Suarez gave a stirring rendition of Leonard Bernstein’s soaring “Maria” from “West Side Story,” a show which has again gained currency via the recent Steven Spielberg cinematic remake of the Broadway and Hollywood classic. The program ends on a high note with all three singers doing justice to “My Variant Valentine,” the concert’s namesake.

The program proved, musically for Valentine’s Day, that “love makes the world go round,” as is stated at the closing of the program. The evening more than lived up to Maryland Opera press release’s  understated promise of an “exciting Valentine’s experience for our audience.”