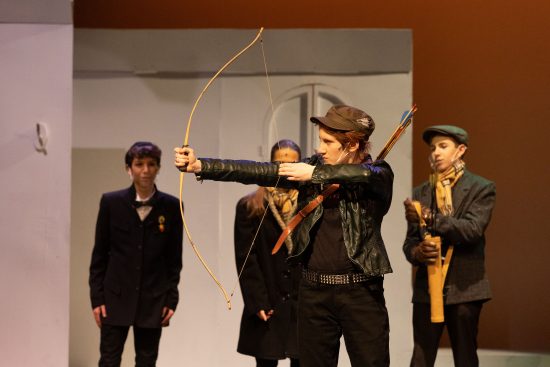 The Children’s Theatre of Annapolis’ “Robin Hood” is a superb, modern twist to a classic tale, complete with themes of love, death, and, yes, taxes. Yet despite the age of the story, this weekend’s engaged, young audiences were evidence that all ages can understand good versus evil, arrogance versus empathy, and love versus power.

…a superb, modern twist to a classic tale…

The show, based on the book by Howard Pyle and adapted by Michael Marrone, allowed for the audience to relate to the beloved classic characters through modern dialogue and cultural references. Though not a musical, director Steve Mangum used a variety of music throughout each set change to prepare the audience for what the next scene would bring (“Going to the Chapel,” “Blowin’ in the Wind,” etc.)

From start to finish, Teaghan McGloughin as Robin Hood ably led the audience through Robin’s evolution from mischievous youth to full blown hero of the poor (with help from his sister, played by the compelling Lia Klug). He recruits similar outcasts to righting the wrongs of the local sheriff’s efforts to crack down on all who rebelled against him.

With his large stature and immense stage presence, Blake Martin as the Sheriff of Nottingham effectively used his booming voice and menacing facial and physical expressions to intimidate Maid Marian (Olivia Hurd) into marrying him. He is also effective in scaring his long-suffering security team into finding and eliminating Robin’s Merry Men for his own aspirations.

Finn Hintermeister proved to be a scene stealer in his role as both Lord Chilwell and Friar Tuck. He effectively demonstrated the power of both a privileged leader’s arrogance and the angst of a religious figure having to break laws to adhere to his beliefs.

Also a standout was Jeremiah Gilbert as Midge in Robin’s gang. His stage presence and delivery of lines in such a dignified and dramatic way kept reminding the audience of the true seriousness of their taking risks. Connor Schwab played a very amusing security guard for the Sheriff. His comedic timing through scene after scene brought the audience from deep, emotional reactions to amusement in seconds.

Though the storyline was heavy at times, the mood was suddenly brightened by the Merry Men’s impromptu dance to Earth, Wind & Fire’s “Boogie Wonderland” as they gathered in their hideout. Another light moment was a spectacular robbery, with the gang disguised as females, robed and using dainty fans to cover their faces (which included a silly, laugh-out-loud dance).

Kudos to costume designer, Tracy Rinehardt, who dressed Robin and the other Merry Men in modern black jackets, while the Sheriff and security were in military and police uniforms. Though minimal, the set design by Todd Croteau and props from Jim Tierney were effective in guiding the story along whether indoors or in Sherwood Forest.

This production of “Robin Hood” was a challenge for Children’s Theatre of Annapolis to produce. The Omicron virus forced all those involved into figuring out how the rehearsals and production could take place. A scaled-down set, the work of an absent stage crew performed by the actors, mandated masks, and vaccine requirements for audiences were put into place. Yet the audience, young and old, was transformed by a story that never gets old.

Director Mangum said, “Stories like these keep us sane in times of crises. They have the ability to transform circumstances and inspire those who listen to laugh, cry, think, and act.”