Theater Review:  ‘The Simon & Garfunkel Story’ at the National Theatre had you humming all the way home  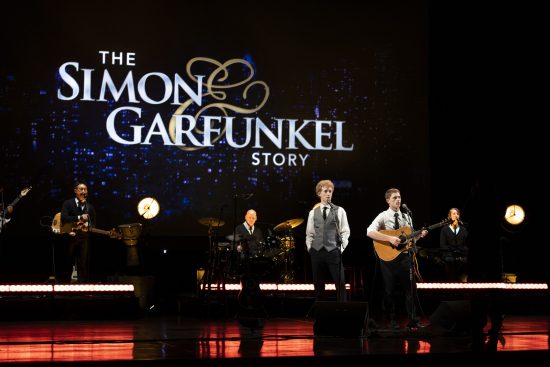 They say you judge a musical by the humming of show tunes as you leave the theater. Those of a certain age were not only humming…they were singing the lyrics to the familiar songs in “The Simon & Garfunkel Story” at the National Theatre. It was a trip down memory lane with Art and Paul, played by two tribute singers, and four backup musicians.”

…a trip down memory lane …

It was fun to watch Taylor Bloom (read his ‘Quick 5’ interview here) and Benjamin Cooley channel Paul Simon and Art Garfunkel respectively, from their early years in Queens to the infamous reunion at Central Park. Both Bloom and Cooley got the look, voices, and stage presence down pat, with an obvious appreciation of the real Simon and Garfunkel.

The National Theatre provides a concert-like setting for the show that chronicles the journey of these two folk-rock artists. Original film footage, video projections and photos run on a giant screen behind the singers and the live musicians. Kudos to Zack Kamins on keyboards, Josh Vasquez, bass guitarist, percussionist Bob Sale and multi-instrumentalist Marc Encabo. (I hope I have their names correct, as there was no paper program and or a way to scan one.)

Another nod goes to the unnamed costume designer and make-up artists who created an authentic look/feel of Art and Paul with costume changes, from vests to hippie T-shirts and sweaters to turtlenecks, to reflect the changing times.

Created and directed by Dean Elliott, this is not a Broadway musical. There’s no choreography and the only movement came from band members getting into a groove. As a “tribute concert,” as some critics have called “S&G,” it would make a perfect fundraiser for PBS or other organizations that produce benefits. The house was full capacity with lots of grey-haired boomers jumping to their feet for the finale.

For this writer, it was a blast from the past, especially those long-forgotten songs like “Hey School Girl,” one of the first songs they performed as Tom and Jerry in the late ’50s. We know this because the flashing video/photo backdrop kept us up to date on world happenings.

I must confess, however, that I really enjoyed hearing the chronological repertory of their hit songs from “The Sound of Silence,” followed by “Bleeker Street” and the hand-clapping “Cecilia,” to the audience favorite, “Homeward Bound” (or maybe it was “The 59th Street Bridge Song” or “The Boxer”) to the encore, “Bridge Over Troubled Water”—a terrific rendition by the stars of the show.

This was the third Washington area visit in the past five years, and one expects to see the cast return following a long North American tour that takes the troupe to Canada. If you do happen to catch them on their return, you’ll be humming those tunes long after the curtain comes down.

Running Time: 2 hours and 15 minutes with one 20-minute intermission.

“The Simon & Garfunkel Story” wrapped up on Sunday, Jan. 30 at 7:30 p.m., at The National Theatre, 1321 Pennsylvania Avenue NW, Washington, DC, before continuing on its US and Canada tour. For tickets to upcoming events at the National, go online.