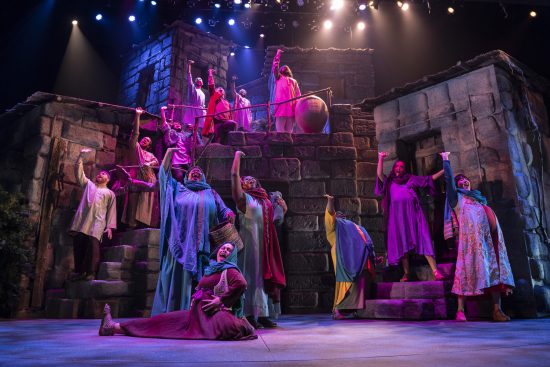 In a way, the idea of reviewing a show that is soon to be sold out seems redundant. Everyone knows this is an awesome piece of work—a Broadway classic in the making—so why bother?

If for any reason you can’t catch the current production of “A.D. 16” at Olney Theatre Center, consider this a preview of the touring show when it comes to the Hippodrome, the National, or the Kennedy Center in a few years’ time. This the earliest you’re likely to see this juggernaut, which is clearly ready for takeoff.

Bekah Brunstetter and Cinco Paul have been developing this R & B-inflected musical for a number of years and the buzz surrounding the show is palpable. What sends this into the stratosphere are the knock-out performances of a stellar cast at Olney Theater’s main stage, directed skillfully by Stephen Brackett.

The premise, as the title implies, is simple enough—a glimpse of daily life for teenage Jesus circa A.D. 16, and his first encounter with Mary Magdalene. A newcomer to Nazareth (or, as the snazzy chorus repeatedly puts it, “Na-na-na, na-na, na, na-Nazareth!”), Mary has been forced to leave her hometown of Magdala because of a messy divorce, amid accusations that she is possessed by demons.

Jesus himself seems awkward, geeky, and dismissed as a nerd by all the teen moms on the block. Ben Fankhauser, in the role of the Lord-To-Be, has to move between awkward adolescence—his storytelling chops are lacking, ditto his powers to heal—and soaring, virtuoso arias here he expresses his ideals to Mary the new girl next door, and wins her heart.

Note my use of the lower-case “h” here when I refer to Jesus, which is deliberate because clearly, he ain’t He yet. One of the running jokes throughout the show is that he hasn’t reached his full potential. His frequent punchline-worthy admission, “I’m still working on it,” reminds us that Brunstetter and Paul want to humanize his story, which they do in an admirably gentle way. This isn’t the cynical world of Monty Python’s “Life of Brian,” with Jesus & Co. doing chorus-line kicks from their crosses. It’s a loving and respectful look at the traditions that lie at the core of the Gospel narratives.

As played by the luminous and awesome Phoenix Best, Mary is the quintessential proto-feminist, appalled by what society expects of a 16-year-old like her, and surrounded by young women her age who are already sporting babies and/or baby bumps. The trio of Nazarene wives who befriend her—Adelina Mitchell, Jade Jones, and Chani Wereley—are priceless comic partners-in-crime, telling Mary, in no uncertain terms, what’s expected of her.

Beyond the Nazarene women’s snark and wicked retorts, however, watch for the moments when it gets serious. These young women talk openly about their status as property in Biblical Nazareth. On one memorable occasion, the spoken word “property” hovers in the air as Jade Jones turns directly to the audience. It’s a split second, but that’s all it takes for an African-American performer to remind us of our own not-so-distant past. Slavery, horrifically, has always been with us, and it’s a stain on humanity we have yet to fully reckon with, especially here.

Mary quarrels constantly with her father, who loves her but who feels he’s a failure if he can’t marry her off. As Mary’s father Jacob, Alan H. Green carries the weight of parental responsibility for a rebellious teen, and he does it with a grace and power that’s hard to match. Jacob’s own sacrifices on her behalf are borne quietly, but provide a much-needed anchor for Mary and audience alike.

What sets this show apart isn’t necessarily the skillful mixture of pop-music genres in the soundtrack, or even the performers, although they raise the rafters with one virtuoso turn after another. What struck me, and others, was the way Brunstetter and Paul are willing to skewer the hyper-righteousness of both the left and the right, in the same show.

Too often, we caricature theatre as having a monotonous, do-goody-two-shoes message. Here, you get a Mary who is so full of herself she leads a march on Nazareth that has disastrous consequences—and we get to see Jesus pinpoint the problem with her ego. He insists that doing the right thing must come without the preening and virtue-signaling that undermines the left so often these days.

As for the righteously right, we have another comic trio—the Sanhedrin, played with impeccable comic timing by Jared Loftin, Calvin McCullough, and Christian Montgomery. Loftin’s performance as Nicholas, the leader of a far-right gang of enforcers, is over-the-top hilarious which makes his resolve to burn down a nearby leper colony such a dark turn. Brunstetter and Paul deliberately introduce the memory of the Tulsa riots (and, by extension, the host of riots that plagued black communities here for generations). Here, the authorities attempt to destroy an entire community because of the status of their skin—the bias against lepers standing in, point-by-point, for the racism that continues to plague our own society.

The musical settings for each number are infectious, and there are moments when other famous musical motifs—from “Fiddler on the Roof” to Handel’s “Messiah”—get a comic shout-out. Mary gets her share of fantasy sequences, thanks to Colin K. Bills’ lighting design, including that moment when—in what you might call a moment of supreme, romantic irony—her fantasy Jesus promises to take her to Heaven, complete with angels in tow.

To be sure, this being a comic musical, all the potential gut-punches get pulled at the last minute, although there are misfortunes and missteps enough to leave us thinking. This will not only be a thrilling vehicle for a cluster of rising stars onstage, it will give you a lot to ponder long after the house lights come back up.

Running Time: Two hours and 15 minutes with one intermission. Snacks and drinks are available but must be consumed outdoors.

Masks, proof of COVID vaccination, and ID are required to attend for all patrons. For further information, go to their website.