Theatre Review: ‘A Raisin in the Sun’ at Chesapeake Shakespeare Company 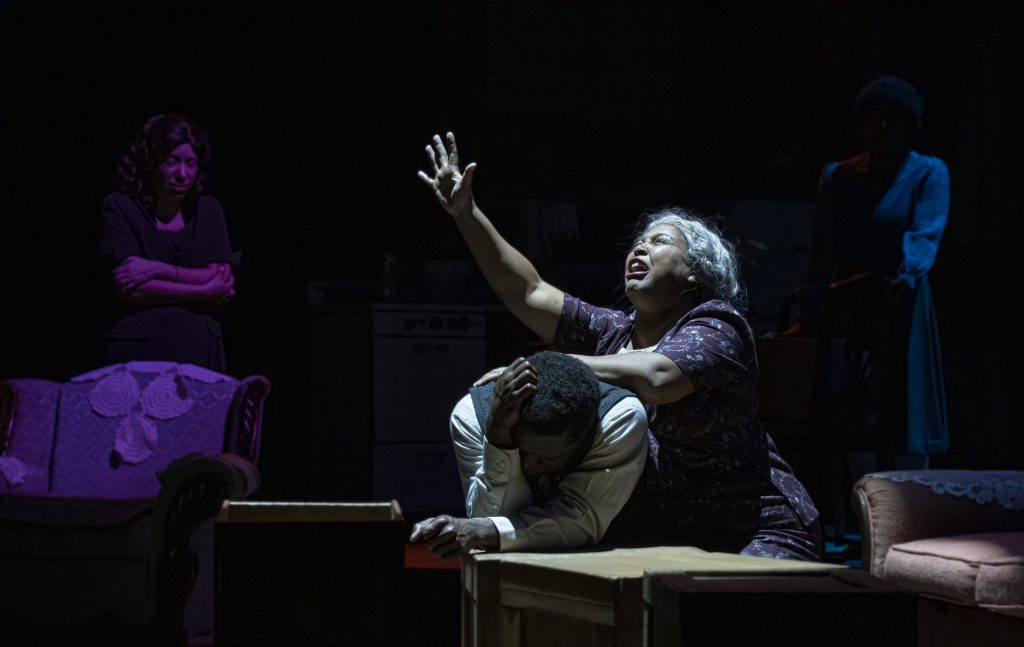 Friday morning in the cramped Southside Chicago apartment of the Younger family finds Ruth making breakfast. Walter Lee, her husband, is jockeying for time in the shared bathroom down the hall. So are their son and Walter’s sister and mother. A special kind of tension is soon revealed in what otherwise appears to be a typical day. There’s a big check coming in tomorrow’s mail, and Walter has aspirations for it.

So begins the canonical “A Raisin in the Sun” by Lorraine Hansberry. Its title taken from the Langston Hughes poem “Harlem,” Hansberry created a tense and moving story adapted from elements of her own childhood. Under the direction of Morgan State University’s Reggie Phoenix, Chesapeake Shakespeare Company (CSC) has delivered Baltimore’s finest production of the play since its 2009 run at Coppin State. CSC’s programming choice here is perfectly timed, hot on the heels of their highly successful “Classics for Your Consideration: African American Edition” last November, which was the brainchild of Associate Artistic Director, Gerrad Alex Taylor.

In “Raisin,” Taylor gets to display his acting chops, and they are formidable. He plays Walter Lee Younger, one of the two central characters in Hansberry’s play. The other is Mama, portrayed with firm determination by Tamieka Chavis. As the leaders of the Younger family, Taylor and Chavis give them a sense of shared love and struggle that elevates conflicts beyond simple competition for dominance. Walter is “all whacked up with bitterness” and in Taylor’s hands, the character is a walking powder keg. Chavis makes Mama a quiet storm. Unwilling to settle for a mere “glue” role in the family, she performs an explosion of desperate hope and indignation at the end of the second act. It’s a raw, defiant outburst that urgently propels the Youngers through to the play’s conclusion.

Dawn Thomas Reidy and Alex Jones do wonderful work as Walter’s wife and son. Reidy’s Ruth is lost and tired, yet she effervesces with complete believability when good fortune appears. Beneatha, Walter’s sister, is a precocious 20-year-old portrayed with wide-eyed vigor by Niyah Worthy. Beneatha reveals to her suitors—the bourgeois George (Quincy Vicks) and Nigerian immigrant Asagai (Lloyd Ekpe)—that she’s a searcher, and a bit of a poseur at times, but always rooted in youthful ideals. Ekpe’s patois is tough to understand at times, but his earnestness and energy are infectious. He and Chavis share some dazzling comic timing in one scene. While Beneatha is famously the most autobiographical character in Hansberry’s work, one gets a sense that Asagai may serve as the playwright’s more adult voice. As George, Vicks gives the pretty, rich boy plenty for audiences to laugh at, and to curse. Zach Brewster-Geisz plays the frightened, nervous Mr. Lindner, who’s trying to peddle a devil’s bargain to the family. Dominic Gladden is the equally nervous Bobo, a wannabe business partner of Walter’s, who must deliver some very bad news. Both Brewster-Geisz and Gladden are over-the-top in their twitching, stammering deliveries. Brewster-Geisz plays it smaller, with shaking hands and a fearful, trapped expression that persists throughout his pitch. Gladden is immense, even in small things. When Bobo asks “Could I please get a drink of water, before I tell you about it?” what follows is thirty seconds of excruciating tension that plays very, very funny.

Director Reggie Phoenix shows a keen sense of spacing, in both time and physicality. He uses distance among his actors to symbolic effect without making the effort too obvious. There are sight-line challenges inherent to the stage at CSC (at the ground floor level, patrons should avoid the left and right sections), but with a few exceptions, Phoenix manages the placement of his actors with grace and subtlety. Timothy Jones’ set design makes great use of the verticality of the space, featuring a tenement fire escape backdrop, dressed with hanging laundry. Lighting by James Jackson is positively lovely, and Sharlene Clinton’s costumes are mostly spot-on. Sound by Matthew Datcher is quiet and hits its targets.

It’s obviously too late now to see Sidney Poitier, Ruby Dee, Claudia McNeil, Louis Gossett Jr., and the rest of the 1959 Broadway cast perform “Raisin” on stage (though nearly the entire cast reprised their roles for the 1961 film version), but very possibly the next best thing is available this month in Baltimore.

Running Time: 107 minutes with one intermission.

Advisory: Racial epithets (“N” and others), smoking, discussion of abortion.

“A Raisin in the Sun” runs through February 27, 2022 at Chesapeake Shakespeare Company, 7 South Calvert Street, Baltimore 21202. For tickets call (410) 244-8570 or purchase online. Patrons are required to provide proof of vaccination and must remain masked.