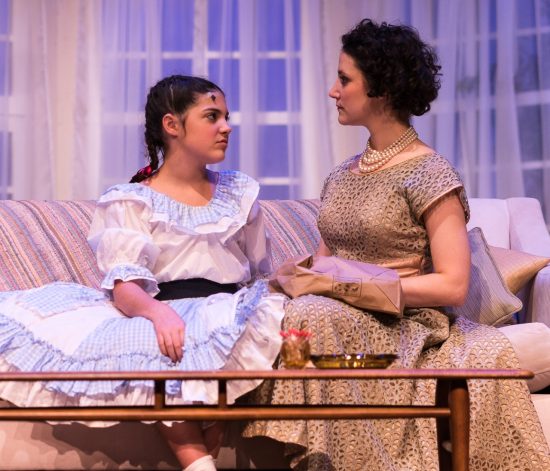 Rockville Little Theatre’s production of “Bad Seed” harks back to that old debate about nature vs. nurture, as well as the question of can children kill? Can they really understand what they are doing? Or is it all the mother’s fault? The film is based upon the 1954 play of the same name by Maxwell Anderson, which in turn is based upon William March’s 1954 novel, “The Bad Seed.” While psychiatry and the understanding of childhood development and trauma have grown in sophistication, the play’s enjoyment comes from the over-the-top behavior of the child in question, Rhoda (Morgan Slattery).

‘Bad Seed’ is an intense show to watch. I think we all know it’s not going to end well, but the fun is in getting there.

This is a child who, for the right audience, could charm the birds out of the tree, then swiftly dispatch them with no remorse. She dresses like a little angel (much is made of the fact that Rhoda never gets her clothes dirty); curtseys like a character from a Regency romance; is polite and capable of making conversation with adults; and at her core, empty. She’s a fun character to watch, and Slattery does a quite credible job at portraying the emptiness within.

She certainly has her doting parents, Kenneth (Todd Mazzie) and Christine (Lizzie Bartlett Holman) fooled, as well as their friends (and landlords), Monica (Natalie McManus) and Emory (Tom Schiller), her grandfather (Christine’s father),Richard Bravo (Stuart Rick), and a friend of the some of the adults—a mystery writer named Reginald Tasker (Vince Terlep).

Rounding out the cast is Leroy (David Dieudonne), the janitor/handyman at the apartment building; Miss Fern (Sandhya K. Kidd), the co-headmistress of Rhoda’s school; Mrs. Daigle (Kat Binney) and Mr. Daigle (Peter Rouleau), the parents of a dead schoolmate of Rhoda’s, Claude; and a messenger (Alex Batselos).

The plot hinges on a dead schoolboy, Claude who won a penmanship medal that Rhoda coveted. The subplot that gives us the title—Christine’s real parentage (the daughter of a rare female serial killer). Christine doesn’t know she’s adopted, but she remembers her mother in her dreams. This brings out the nature vs. nurture debate, and the old trope that if a child goes wrong, the mother must be blame—and in Christine’s case, literally because of genetics.

The fun of the play is watching Rhoda. She’s only about 10, so isn’t quite as sophisticated about covering her lethal tracks as she might be in another 10 years, but she’s quick-witted, adaptable, and ruthless. One of Slattery’s best moments comes when her mother confronts her about the death of an elderly babysitter when they lived in Baltimore, and the child realizes that she might as well tell the truth so she does. It’s the matter-of-fact way that she confesses (or brags) that is chilling. As is the fact that a few minutes later, she’s snuggling on the sofa while Christine reads her a book, convinced that what she did was of no more importance to her mother than it is to her.

Another standout in the cast is Kat Binney as Mrs. Daigle. Her grief at losing her son is real, raw, and her filters are slipping. It’s towering, overpowering, and she seems very alone. As Leroy, Dieudonne captures the smarmy cockiness and anger of a man who believes he is a victim. His jousts with Rhoda are menacing because he treats her almost as an equal in evil.

The set designers, William Kolondrubetz and Harlene Leahy, give us a lovely 1950s set with solid middle-class appropriate furnishings and colors, and the telephone in  pride of place (a nice touch is that when anybody answers the phone, they almost always sit down before picking it up). Costume designer Linda Swann outdid herself in the dresses, suits, and accessories to create costumes that give us clues to people’s status and states of mind. Special kudos to the dresses for Rhoda that perfectly frame the angelic exterior, as well as the slightly too tight, not as nicely tailored dresses of working class Mrs. Daigle.

Lighting is designed by Stephen Deming, sound by Aaron Skolnik, hair and make-up by Malca Giblin, and special effects by Christine Hurst.

Maxwell Anderson, the playwright, had cleverly kept the violence off-stage, but it’s in the words of the script that the real chills come. Truths are teased out, and the descriptions of Claude’s death are haunting. The director, Pauline Giller-Mitchell, keeps that same feel in the push-pull between the obliqueness of the 1950s and the rawness of a child’s death, and it serves the play well.

‘Bad Seed’ is an intense show to watch. I think we all know it’s not going to end well, but the fun is in getting there.

Show Advisory: Discussions of a child’s death, drunkeness; not for younger children.

Proof of vaccination and masks are required. There is social distancing between rows and patron parties in the seating in the theatre.