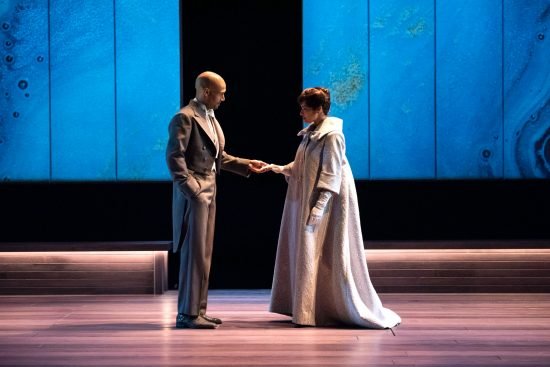 The Cuban Missile Crisis. The Civil Rights Movement. The setting is 1936-1965, America and the afterlife. Characters: Mary, Jack, Cicely, Cord, and Jackie. The program cover: suspicious eyes and a sliver of the White House.

“Change Agent” doles out clues to its premise with deliberate obfuscation. With a touch of detective work, you could identify the woman who “influenced American policy—and in turn, world events— through her friendships and proximity to power,” but it seems Arena Stage hopes that some will let this new play surprise. An intimate five-person cast—featuring notably diverse, color-blind and disability inclusive casting—tells a swirling account of art, tragedy, the seductiveness of power, and the threat of nuclear armageddon. But put simply, “Change Agent” explores and imagines how painter Mary Pinchot Meyer’s life intersected, intertwined, and influenced John “Jack” Fitzgerald Kennedy’s life from adolescence through death.

…riveting…brings challenges and questions to the American canon, wrapped in beautiful performances.

The recipient of an Edgerton Foundation New Play Award, the play is written and directed by Tony Award and Pulitzer Prize nominee Craig Lucas. His dialogue flows like poetry, whether in a lyrical monologue or bouncing repartee. Squeezing three decades of life into one evening of theater is no small effort and the beginnings of the play move at such a breakneck pace, it feels as though we’re catapulted through Mary’s life. She’s fifteen at a school dance; a student at Vassar College; at the UN Conference in San Francisco and happily married to Cord (Jeffrey Omura); and unhappily married as cynicism sours her husband. Only with the introduction of Jackie Kennedy (played by Kathryn Tkel with effortless poise and that famously inscrutable accent) does the story find a more natural rhythm. While final revelations perhaps explain the jarring quality of the earlier sections, the payoff is minimal. Yet, once “Change Agent” hits its stride, it’s riveting.

Of course, there are the Kennedys. Playboy Jack (Luis Vega) still manages an endearing earnestness and vulnerability, even when his political cowardice allows warmongering and segregation and his philandering wounds Jackie. Jack is certainly not the heroized statesman built up in our national consciousness. Yet, his martyrdom remains absolute in “Change Agent.”

Confidante to both Jack and Jackie, tension grows between Mary’s friendship with Jackie and her star-crossed attachment to Jack. While Mary (Andrea Abello) glows with empathy and righteousness—a spirited pacifist committed to integration and diplomacy—the specters of the surveillance state and conspiracy seep out from her husband, CIA intelligence officer, Cord Meyer. Both Mary and Cicely d’Autremont—her friend from Vasser and the wife of the CIA’s James Angleton—struggle with the moral implications of their husbands’ work as the names Dulles, Hoover, and McCarthy take on sinister life.

As any story featuring Jackie Kennedy merits, gorgeous costuming by Alejo Vietti eases the sweep through time, with Mary (Andrea Abello) often switching outfits onstage. A gown slips off, a coat buttons up, and the years tick by. Unified by a palette of gray and silver, the chic dresses and suits find occasional contrast with a brighter scarf, peacoat, or robe. Whether at an inaugural ball or a golf course, Abello provides the tailored outfits befitting our wealthy and powerful cast of characters.

The vacant stage—with only a border of under-lit benches, a green stretch of grass, and an adjustable central pedestal that can sink to create a dance floor or rise to make a bed—relies on sound and lighting design (by Broken Chord and Cha See respectively), along with the audience’s imagination, to conjure a mix of times and places. Booms of thunder, flashes of lightning, and candlelit lanterns create a cabin in a storm, while a distant squeal of tires conjures the road near the family home.

Most striking in the set designed by Wilson Chin is a massive tilted frame suspended above the stage. At the rear, brutalist concrete panels invoke Cold War architectural aesthetics. These scenic elements meld with projections designed by Catie Hevner, as the frame provides a screen for date and location headings. The panels are a canvas for video clips, backdrops, and abstract paintings. Unlike the lamentable trend of flashy projections which upstage the actors, Hevner uses restraint and artistry to complement without distracting from the action.

I’ll leave it to historians to parse fact from the fiction in the exactingly researched script, which offers nine pages of appendix on its accuracies and imaginations. While the finale is striking and unambiguous, not all will buy into the play’s disquieting conclusion. As Lucas’ script accuses, “government surveillance, blizzards of misinformation, vote suppression, white supremacy and guns proliferating…” is a “version of America [we] all know only too well.” Yet conspiracy remains taboo to speak aloud. Even with doubts, “Change Agent” brings challenges and questions to the American canon, wrapped in beautiful performances.

Runtime: 2 hours and 20 minutes with a 15-minute intermission.