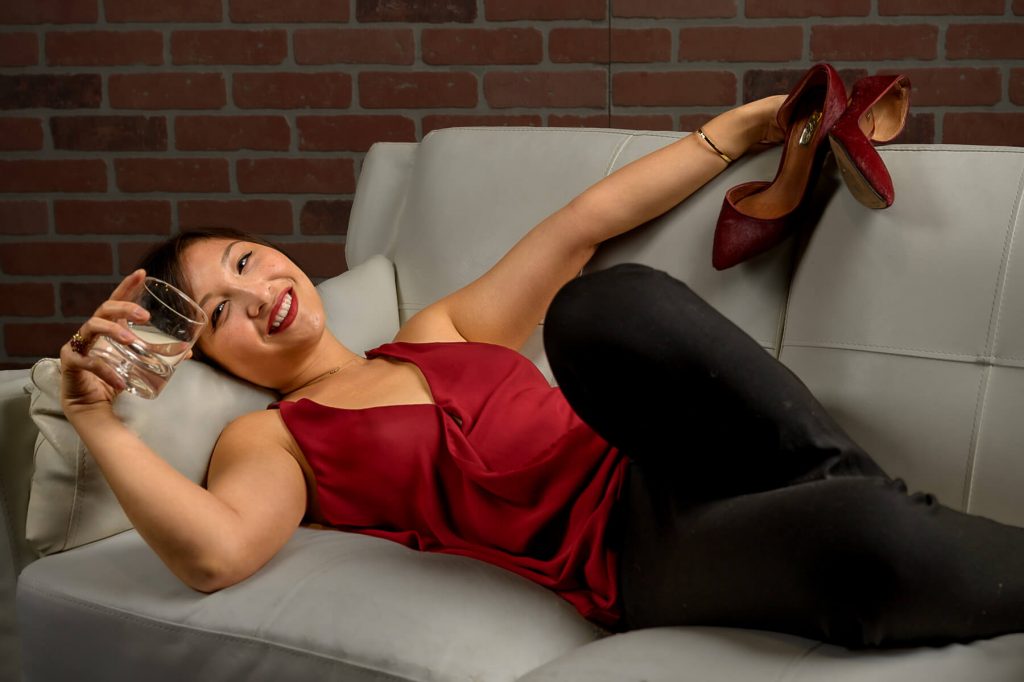 Contemporary French playwright Yasmina Reza specializes in obnoxious characters who bicker over first-world problems. In both of her best-known works, “’Art’” and “God of Carnage,” she paints the sort of tragicomedy audiences learned to embrace in the modern period, from authors like Ionesco and Albee, but adapted to the post-cold-war era. While “’Art’” is a life-or-death struggle centered on a painting that’s about nothing, “God of Carnage” (“Le Dieu du Carnage”) finds a pair of married couples spending an afternoon discussing a fight between their children. Christopher Hampton’s English translation won three Tony Awards for Best Play, Best Director, and Best Actress and the Olivier Award for Best Comedy.

The actors deliver maximum exertion from square one, showing incredible stamina in the process…

Veronica and Michael Novak (Vanessa Eskridge and Matt Leyendecker) have invited Annette and Alan Raleigh (Elena Gray Huang and Troy Jennings) to their New York apartment for a civil conversation about a playground altercation between the couples’ young sons. The Novaks’ living room is festooned with a hodgepodge of art and artifacts—a massive Chinese fan, a Kandinsky canvas, and African drums. Veronica is writing a book about the war in Darfur (this play predates the 2010 ceasefire), while husband Michael operates a wholesale housewares business. Alan, participating in the meeting with reluctance, is only occasionally present. He spends most of his time on a cell phone doing damage control for a client pharmaceutical company. Annette tries to be the peacemaker as civility among the four begins to erode, but naturally this effort, too, dissolves. “There’s nothing to be gained from being stuck down some emotional cul de sac,” says Veronica at one point, as either foreshadowing or threat.

Early in the piece, Stephen Deininger’s direction delivers a slow pace, which emphasizes the awkwardness of strangers gathering to talk about a tender subject. This section contains large breathing spaces during which all we hear is the constant ticking of a clock (a nice touch from sound designer Stuart Kazanow). Eventually the pace picks up, and by the time all four characters are sufficiently drunk and angry, it’s a free-for-all. At that point, this piece sort of works. If there’s a problem here, it’s the energy arc leading up to that. The actors deliver maximum exertion from square one, showing incredible stamina in the process, but this approach limits them when conflicts require that the tension be amplified. They go to “11,” certainly, but starting at “10” doesn’t give them enough room to get there. There’s a feeling of overwrought stiffness and lack of irony here, and one isn’t sure whether that’s an intentional choice.

Eskridge is delightfully imperious as hostess Veronica, whose husband is a true-to-recipe buffoon in Leyendecker’s hands. Jennings’ Alan is existentially rude and distant, while Huang makes the most of her character’s emotional dexterity. All four show tremendous commitment, just not much depth. Maybe that’s the point. One moment that stands out brilliantly in this production is partially thanks to a casting choice. Michael uses a racial epithet when talking to Alan about the Sudanese. Leyendecker is white and Jennings is Black. As he delivers the line, his back is turned to Alan. Jennings gives him a furious glare that provides a single instant of real humanity.

Vanessa tells us “we’re eccentric enough to believe in the soothing power of art.” Perhaps that’s the missing irony. There is definitely nothing ‘soothing’ about the play.

“God of Carnage” runs through March 13, 2022 at Vagabond Players, 806 South Broadway, Baltimore 21231. Tickets are available for purchase online. Patrons are required to provide proof of vaccination and must remain masked.