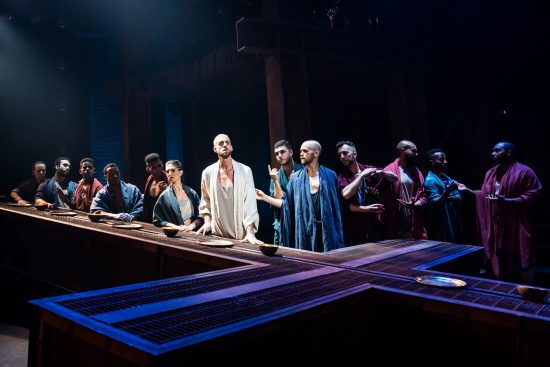 The company of the North American touring company of “Jesus Christ Superstar” at the Kennedy Center. Photo by Matthew Murphy and Evan Zimmerman.

“Jesus Christ Superstar,” the current production the Kennedy Center, reminds us that it is a half-century old — or rather, a bit past that, since the “50th Anniversary Tour” was delayed because of the pandemic. The show has been a movie, a staple of both regional and community theatres, and even received the NBC live-Broadway treatment in a production that I reviewed for this publication.

The current production, coming in at a tight 95 minutes, returns the show to its roots as an album musical, staged as a concert before opening as a fully produced rock opera. The cast doubles as musicians, carrying instruments on stage and wrestling hand microphones back and forth during the show’s many scenes of conflict. A full orchestra is stowed in the niches of the scaffolding that makes up the bulk of the set.

The show definitely has its highs…

Director Timothy Sheader is going for a rougher take on a show that has been smoothed down over time, as its once-jarring interpretation of the last week of the life of Jesus of Nazareth has become less controversial. At times, he succeeds, but the production as a whole is wildly uneven.

Sheader has Aaron LaVigne lean in to the rock-concert motif with his portrayal of Jesus, a winking pop star smiling at his adoring fans in the first act, and a troubled hard rocker in the second. LaVigne is far stronger, as he struts his messianic stuff in the early scenes, than in the latter part of the show. Omar Lopez-Cepero is more consistent, but less interesting, as Judas. His portrayal of the character who is the true heart of “Superstar” is competent, but changes little throughout the story, even as Judas becomes angrier and more defiant.

Alvin Crawford, and his theater-shaking, low bass, stand out as Caiaphas, while Paul Louis Lessard channels Tim Curry’s Frank N. Furter in his interpretation of Herod. Tommy Sherlock’s Pilate is tentative in the first act’s “Pilate’s Dream” but powerful in the character’s several second act appearances.

The boldest leaps in the production come from Drew McOnie’s kinetic and frenetic choreography. The talented and energetic company is put through modern pacing involving synchronized, angular motions and full-body signals—some of which read better than others. While the movements in some cases heighten the mood of the scene, others are obscure, and come off as avant garde for its own sake. This is most evident in the bafflingly sexualized motions assigned to the high priests, actions totally unbefitting their scenes (and getting in the way of Crawford’s prodigious talent).

Other moments are also confusing. Cross imagery abounds during “The Temple”—a scene long before the Passion—but does not appear at other times, except in the unsubtle literal cross-walk that makes up much of the playing area. (Tom Scutt, who designed the set, does much better with the simple earth-tone costumes of the apostle ensemble, a counterpoint to the garish garb of the priests.) Gold glitter is tossed at LaVigne to signify each whip-stroke during “39 Lashes,” with the strange effect that Jesus is less bloody after the ordeal than before.

Sheader is trying to do too much too fast, cramming the show into an hour and a half. The whole affair feels rushed, and the hard-rock edge drowns out some of the lyrics. The show definitely has its highs, but often trips under its own pace. There are many Books in the history of “Superstar,” and this production seems bound for the Apocrypha.

Running Time: One hour and 35 minutes without intermission.

“Jesus Christ Superstar” runs through March 13, 2022 at the John F. Kennedy Center for the Performing Arts, 2700 F St NW, Washington, DC 20566. Click here for tickets and information. NOTE: All patrons must wear masks and show proof of vaccination in order to attend a performance.